Raiders may need to repeat aggressive style to beat Chiefs 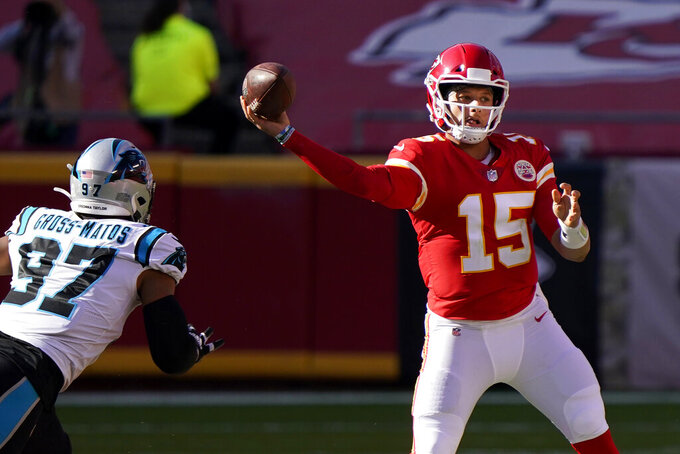 The Las Vegas Raiders needed to alter their style when they finally broke through last month with their first win in Kansas City in eight years.

Derek Carr delivered the most prolific deep passing game of his career, coach Jon Gruden called for two successful fourth-down gambles and a much-maligned defense came up with a couple of key defensive stops to outpace Patrick Mahomes and the Chiefs.

Pulling off the season sweep against the defending Super Bowl champion Chiefs (8-1) will be an even taller task for the Raiders (6-3) on Sunday night.

“They’re the world champions. You have to do whatever it takes to try and win the game,” Gruden said. “That particular day, it just seemed to be a shootout. There’s no guarantee we’re going to make a first down this time. We’ll see how it goes.”

Carr, who has been criticized throughout his career for being too quick to check the ball down, was as aggressive as ever during the 40-32 win in Week 5. His 219 yards passing on deep throws were 79 more than his next biggest game of his seven-year career as he connected on long scoring strikes to Henry Ruggs III and Nelson Agholor, as well as two other deep throws to Ruggs and Hunter Renfrow.

The ultra-aggressive approach appeared to catch the Chiefs by surprise that day as their defensive backs seemed to jump at underneath routes and leave room to operate deep.

“They made some good plays, they came out on fire,” cornerback Charvarius Ward said. “They had a good game plan. They had an answer for the things were doing, but this week we're going to make sure it doesn’t happen again.”

The Raiders' defense is playing its best football in years heading into this game, allowing 14.7 points per game and a 68.1 passer rating the past three weeks after forcing five turnovers in a win over Denver last week. Slowing the Chiefs will be much harder, especially since most of the defense missed practice all week on the COVID-19 list.

Starting defensive end Clelin Ferrell tested positive early in the week, joining linebacker Cory Littleton on the list. Eight other defensive players were placed on the COVID-19 list as “high risk” close contacts, including starters Lamarcus Joyner, Maliek Collins, Johnathan Abram and Johnathan Hankins. Those players could return by Sunday if they keep testing negative, but won’t be able to practice all week.

It remains to be seen who will start on the offensive line for Kansas City with right tackle Mitchell Schwartz and left tackle Eric Fisher joining Martinas Rankin on the COVID-19 list this week. Schwartz also has been out with a back injury.

“I’m just going to take it day by day, but we’ll see how that goes, see how they feel and everything else,” said coach Andy Reid, who did say he’d be willing to play someone who missed an entire week of practice. “We’ll just see how everything works out.”

The Chiefs also could be without wide receiver Mecole Hardman because of COVID-19, but his absence should be offset by the return of Sammy Watkins. The former first-round pick has been dealing with a hamstring injury since the early part of October, but he returned to practice before the bye and was involved in game prep this week.

“He’s someone who is a threat in every way,” Mahomes said. “Hopefully he’ll be back out there.”

The Raiders have gone to a throwback style during their three-game winning streak, rushing for 190.7 yards per game, while gaining only 138 per game passing. That’s the second highest rushing total and second lowest passing total in the league in that span. This is the fifth time in Raiders history they have run for at least 150 yards and passed for fewer than 200 in three straight wins in a season.

“If we have to do that to win, awesome. If we don’t, awesome,” Carr said. “There have been times against the Chiefs where it’s been shootouts. I’ve done it against Alex (Smith), with Patrick, and there’s been games like that. There’s also times where the running game is there, so it just really depends. Whatever we have to do to win, that’s what I’m ready to do.”

“I’m sure that’s just a coincidence,” Gruden said. “I don’t know. I don’t think about it. The schedule is the schedule. You have to adapt to it and that’s what we’ll do.”