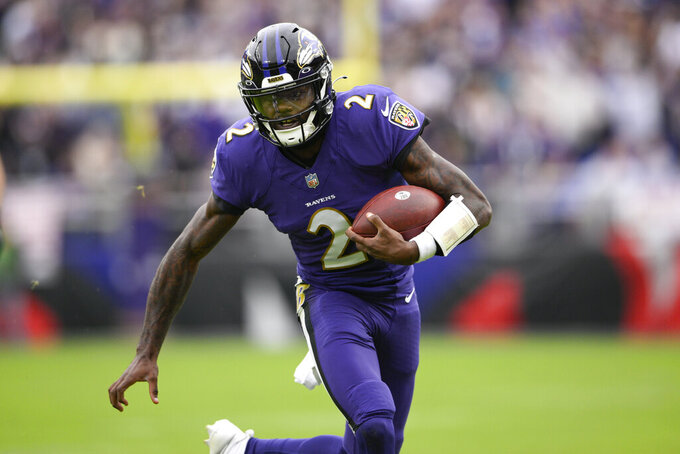 The past week has been a whirlwind for Ben Roethlisberger. The fans in Pittsburgh gave their quarterback quite a retirement send-off, and the emotions from that night will surely linger for a while.

Now it's time for a pretty compelling postscript: Roethlisberger on the road against the rival Ravens, with both teams still barely in the mix for the playoffs.

This will likely be Roethlisberger's final game. Pittsburgh can make the postseason with a win, but only if Jacksonville upsets Indianapolis and the Raiders-Chargers game doesn't end in a tie. Baltimore is in with a win, plus losses by the Colts and Chargers, and a loss or tie by Miami.

So the chance of either of these teams playing on past Sunday is remote. Nevertheless, Steelers-Ravens always arrives with a good bit of buzz.

“You'd never walk out of one of these games feeling fresh or anything like that,” Roethlisberger said. “You go to a place that is tricky to play, because it's loud. The fans are passionate.”

The Ravens (8-8) picked this game to honor Terrell Suggs, another longtime mainstay in this rivalry. Suggs, Baltimore's career sacks leader, played with the Ravens from 2003-18 and will be the team's “legend of the game” Sunday. He had 20 sacks against the Steelers, his most against any NFL team.

The current Ravens will try to put Roethlisberger on the ground as much as possible this week.

“I've always appreciated playing against true competitors — guys I respect and admire — and on the football field, he's one of the greatest to ever do it,” defensive tackle Calais Campbell said. “It's always good going against another person that I feel like is a legend in the game.”

Baltimore quarterback Lamar Jackson won't be facing off against Roethlisberger and the Steelers (8-7-1) this week. Jackson missed the past three games with an ankle injury, and has been ruled out for this week as well. Tyler Huntley is the starter in his place.

The Ravens were 8-3 when they went into Pittsburgh on Dec. 5. They haven't won since. Jackson played in that 20-19 loss, throwing an incomplete pass on a 2-point conversion with 12 seconds left that could have won the game.

The Steelers weren't able to build on that win. They haven't won consecutive games since their four-game run was snapped by a tie against the then-winless Lions on Nov. 14.

Baltimore's path to the playoffs would be a lot more plausible if the Ravens weren't relying on Jacksonville, a double-digit underdog to Indianapolis. The Jaguars (2-14) have the worst record in the league.

“I definitely made a couple texts to my guys down in Jacksonville,” said Campbell, who played three seasons with the Jaguars before coming to Baltimore. “Hopefully they come through for us.”

The Steelers put together their best rushing performance since 2017 while piling up 190 yards in a win Monday night over the Browns. The Steelers did it with J.C. Hassenauer filling in for rookie Kendrick Green at center. Green missed practice time last week due to an ankle injury, and Hassenauer made a compelling argument to get a second look while getting the kind of push that Green has struggled to generate after transitioning from playing guard in college to center in the NFL.

Coach Mike Tomlin said there was a lot to like about Hassenauer’s play, and not just his physicality.

“He did a nice job of communicating with the group and in identifying people in both the run and the pass,” Tomlin said.

Only four Ravens have started every game this season as the team has battled injuries throughout: linebackers Tyus Bowser and Patrick Queen, tackle Alejandro Villanueva and guard Kevin Zeitler.

The Steelers have dropped their last four road games, all of which followed a similar theme — slow starts. Pittsburgh has trailed by 17, 38, 29 and 30 points in losses to the Chargers, Bengals, Vikings and Chiefs.

While the Steelers managed to make it competitive late in two of those games, they know they can't afford to fall too far behind again Sunday if they want to harbor any faint hopes of reaching the postseason. Tomlin is optimistic the stakes and the stage will help provide a spark.