Thomas, Ravens D up for challenge of facing Mahomes & Chiefs 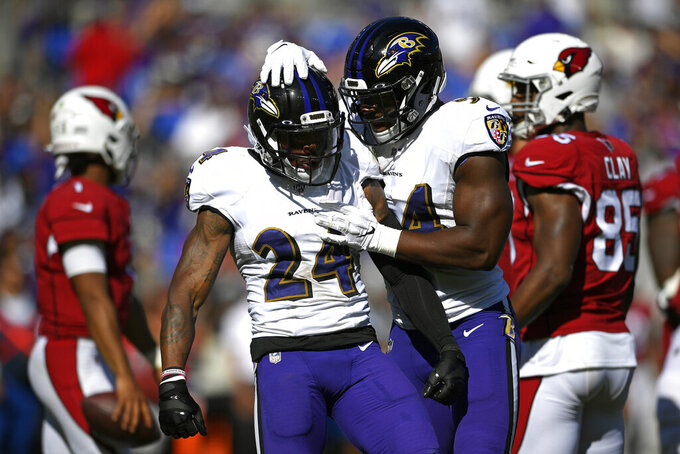 OWINGS MILLS, Md. (AP) — When it comes to defending the long ball against Chiefs quarterback Patrick Mahomes, Ravens safety Earl Thomas has a message for Kansas City's receivers: I've got you covered.

Serving as the last line of defense for Baltimore, Thomas will be tested Sunday by Mahomes, who has thrown for 821 yards and seven touchdowns in just two games.

"Luckily, the Ravens have me at free safety controlling the deep end," Thomas said Wednesday. "I plan on eliminating all the big plays."

Baltimore (2-0) and Kansas City (2-0) are among only four unbeaten AFC teams. The focus for both has been their highly productive quarterbacks, with Lamar Jackson serving as the Ravens' equivalent to the agile, innovative Mahomes.

When K.C. and Baltimore met last December, the Chiefs won 27-24 in overtime. Mahomes threw for 377 yards in that one, and now the retooled Ravens defense is looking to be far more effective in the rematch.

This isn't the same Ravens defense that gave up 441 yards in Kansas City last year. Linebackers Terrell Suggs, C.J. Mosley and Za'Darius Smith, along with safety Eric Weddle, left as a free agents. But Patrick Onwuasor, Matthew Judon and Thomas — who played with Seattle last year — have stepped in to make Baltimore the No. 2 ranked unit in the NFL.

"I think they're a heck of a defense," Chiefs coach Andy Reid said. "You start on the back end with Thomas. He's a veteran player that's a future Hall of Famer. They're good. Guys leave, new guys fill in and they just go."

After mauling Miami 59-10 in the opener, Baltimore limited Arizona to just 20 yards on the ground but yielded 349 yards passing to rookie Kyler Murray in a 23-17 victory last week. Certainly, having Anthony Averett making his first NFL start for injured Jimmy Smith at cornerback didn't help. But there were issues on defense that must be corrected before facing Mahomes.

"We can be better than we were," coach John Harbaugh said.

The Chiefs own the league's top-ranked passing attack and are third in total offense. Mahomes tossed four touchdown passes in the second quarter against Oakland last week and finished with 443 yards. The third-year quarterback will be looking for an encore in the Chiefs' home opener.

"We've got to try to make them one-dimensional, stop the run as usual, but it's going to be a tough task on the road against him," Thomas acknowledged. "He's coming off a good game and it's going to definitely challenge us."

Baltimore's new-look defense might be significantly better in a month or two, but Sunday they're going to run with what they've got and hope for the best.

"It's the Ravens defense, so guys know what to expect when they come into this locker room on the dark side of football," Carr said. "We're making headway. But there's always room to improve. We're just scratching the surface of our potential."

Jackson has an 8-1 career record as a starter, the lone flaw that OT defeat against the Chiefs. In that game, Mahomes converted a fourth-and-9 in the closing minutes, avoiding a strong rush to hit Tyreek Hill for a 48-yard gain.

"We've got to cover until the whistle blows," Carr said. "Bring your 'A' game, bring your lunch pail, bring your hard hat and let's rock and roll."