Vikings get back on track, with Cook playing as promised 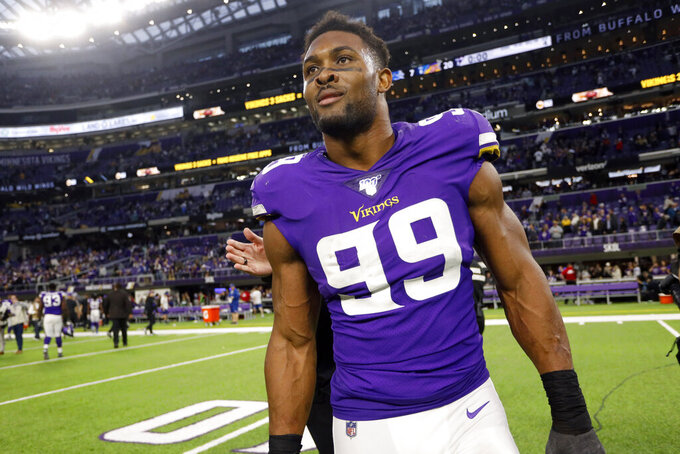 EAGAN, Minn. (AP) — Despite a lingering injury to his collarbone area that forced him out of Minnesota's previous game, Dalvin Cook never hesitated when asked if he'd be able to play against Detroit.

The soft-spoken, hard-running tailback followed through on his promise, helping the Vikings recover from a costly loss in the NFC race with a stress-free 20-7 victory over the Lions on Sunday. Without Cook's productivity and durability this season, it would be difficult to envision the Vikings (9-4) in this position of controlling a spot in the playoffs.

“It’s a physical game. I play running back. I've got to block. I take hits, blindside hits,” Cook said. “So that’s part of the game. You've just got to learn to play through stuff like that. You’re going to feel aches and stuff like that, but I’ll be good. I’m a tough person.”

Cook had 75 total yards and a touchdown in three quarters, before yielding to Alexander Mattison and Mike Boone for the drain-the-clock portion of the game. Cook was first hurt against Denver on Nov. 17. The injury was aggravated at Seattle on Dec. 2, forcing him out of the game in the third quarter.

Cook has been at the forefront of an offense that has largely displayed the balance and diversity desired during an offseason revamp of the scheme for quarterback Kirk Cousins under offensive coordinator Kevin Stefanski and offensive adviser Gary Kubiak. Cook, who missed 19 of a possible 34 games over his first two seasons with knee and hamstring injuries, is second in the NFL with 1,611 yards from scrimmage, and fourth with 13 touchdowns.

Cousins connected with 10 different intended receivers against Detroit, going 24 for 30 in his 10th game this year with 70% completion percentage or better. He's been able to keep the ball moving even without star wide receiver Adam Thielen for half of the season, hitting enough deep and sideline passes to Stefon Diggs, short tosses to Cook and underneath throws to the tight ends to keep defenses from getting comfortable. The Vikings are averaging 28.3 points over their last nine games.

“You let your guard down in this league, it catches up to you. So I just wanted to make sure that we keep our edge,” Cousins said.

The sound defense that has been a staple of coach Mike Zimmer's teams has slipped this season, but the Vikings delivered the type of dominant performance against the Lions that has been more familiar to his tenure. With five sacks, two interceptions, only 98 yards allowed through three quarters and a shutout that lasted until 2:09 was left, the Vikings flexed their muscle and showed some pride. They also proved their depth, with the typical substitution pattern paying off for the defensive line, and a new rotation for cornerbacks Xavier Rhodes, Trae Waynes and Mike Hughes among the two outside spots. With Mackensie Alexander in the slot in the nickel package, Holton Hill also played late after Rhodes and Hughes were hurt.

“We played better. There was only like one or two things during the course of the ballgame that we didn't do like they’re being coached to do,” Zimmer said. “Hopefully that continues to improve.”

WHAT NEEDS HELP Though Dan Bailey has missed only one field goal in the last 11 games, now tied for sixth in the league with a 90% conversion rate, the rest of the special teams have been lacking a spark. The Vikings are 17th in kickoff returns and 23rd in punt returns, though Hughes produced a season-long 17-yard punt return against the Lions. Punter Britton Colquitt left a lot of yards on the field against the Lions, too, with a season low in net average (35.2). Four of his six punts were inside the 20, but he had a 30-yarder to the 15, a 32-yarder to the 23, a 26-yarder to the 13, and a 33-yarder to the 17 that was returned to the 25.

STOCK UP Mattison has been the ideal backup to Cook. The rookie has been on the field for 27 snaps in each of the last two games, a season high. Mattison caught a pass out of the backfield for a first down on second-and-8 with a highlight-reel hurdle to evade a defender and help extend a second-quarter drive that ended in a field goal.

STOCK DOWN Defensive end Stephen Weatherly, who's in the final year of his rookie contract, has fallen behind Ifaedi Odenigbo in the rotation backing up Hunter and Griffen. He has just one sack, down from three last season. Weatherly had two penalties for 25 yards against Detroit, though Zimmer said he was pleased with his performance.

INJURED Thielen has been on the field for only 16 snaps in the last seven games due to a hamstring injury the Vikings have been extra cautious with because he has aggravated it at least twice. Rhodes (ankle) and Hughes (oblique) were hurt in the third quarter and didn't return. Zimmer said the team's medical staff believes the injury to Rhodes is not serious.

NEXT STEPS For the eighth straight week, getting Thielen back to full strength will be one of the top priorities. Another recurring challenge? Winning on the West Coast. The Vikings, 1-6 in road games in the Mountain and Pacific time zones under Zimmer, visit the Los Angeles Chargers on Sunday. They lost 37-30 at Seattle a week ago.

By The Associated Press an hour ago
By Tim Booth 3 hrs ago
By Greg Beacham 4 hrs ago
By Josh Dubow 4 hrs ago
By Dennis Waszak Jr. 5 hrs ago