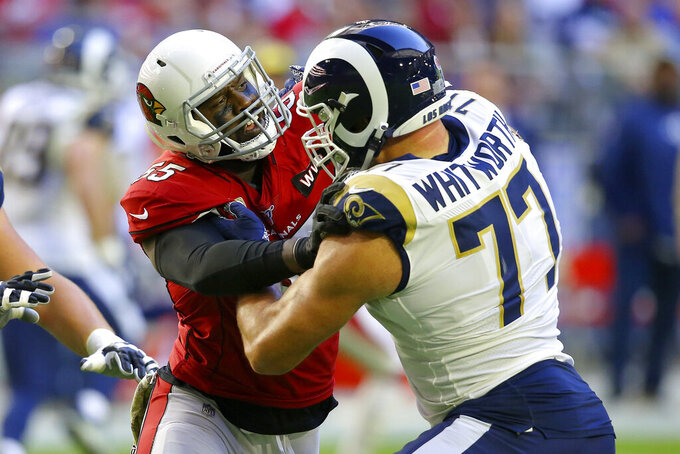 The left tackle for the Los Angeles Rams doesn't see any reason why he should stop.

The 38-year-old Whitworth said Tuesday he wants to come back for a 15th NFL season, but he understands Sunday's game against Arizona could be his last one with the Rams.

“Obviously people talk about age, but I would say, you know, for me as player I feel better and have played better this year than I played the year I became a free agent and came here,” Whitworth said. “So it is what it is, so we’ll see how it works out.”

Whitworth is in the final season of a three-year contract with Los Angeles. He has played all but 10 of the Rams’ 1,028 offensive snaps, providing stability to an offensive line that has been limited by injuries and inexperience.

The starting five against the Cardinals will look almost nothing like the group that opened the season, let alone the line that took the Rams to the Super Bowl.

The constant turnover is one reason why the Rams (8-7) missed the playoffs for the first time in three seasons under coach Sean McVay.

“For me, it’s a season that didn’t work out how we wanted but still a lot to be proud of,” Whitworth said. “Really just going through a season like this where you lose as many guys up as we did up front and play with as many young guys as we did, I’m just proud to go through it and play it and feel like I played well.”

Penalties have ticked up for Whitworth. He has been flagged 12 times, including eight holding calls, but he believes his game has held up in spite of the notion that time has caught up with him.

Whitworth was amused by a recent article looking ahead to the impending free agency of Arizona offensive tackle D.J. Humphries, comparing the 25-year-old to other young linemen such as Green Bay’s David Bakhtiari and Houston’s Laremy Tunsil.

Whitworth wondered how he can be “right there in the same category with all of them, actually less than ‘em in most everything, but it’s like the narrative is you’re old and you’ve hit a wall and those guys are like up-and-coming superstars. And it’s like, ‘Well, wait a minute. Statistically, we’re the exact same, so how does that work,’ you know what I mean?“

Quarterback Jared Goff also thinks Whitworth is still playing at a high level. What has allowed Whitworth to maintain that form is the relentlessness with which he approaches the physical preparation leading up to a game, the trait that has impressed Goff most in their time playing together.

“The way he practices everyday, and you just see the way that he works, and you realize guys like him and guys around the league and guys that have played for that long, they are not there by accident,” Goff said. “They’re not in their 14th year playing at a high level because they’re physically gifted. It’s because of the work ethic and you see the way he works every day, the way he runs from drill to drill and treats each rep in practice like it’s his last. And it’s something that I’ll definitely hold with me for as long as I play.”

While he wishes Los Angeles was preparing for a game with postseason implications, Whitworth is looking forward to showing what he is still capable of against Arizona.

“To me, in these moments and these games is when you send a message of what kind of football player you really are,” Whitworth said. “The way you compete, the way you execute. Even when it doesn’t mean as much and it can’t bring you something, it’s still a great representation of who you are as a football player.”