Analysis: Some of NFL's best Week 12 drama was off the field 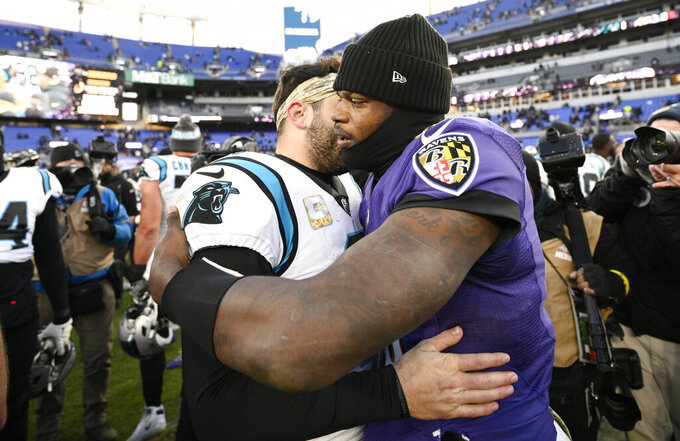 ENGLEWOOD, Colo. (AP) — Threatening to overshadow an intoxicating weekend in the NFL that began with a trio of Thanksgiving classics and included two successful do-or-die 2-point conversions was all the drama that happened off the field in Week 12.

Mike Purcell got up in Russell Wilson’s grill and screamed right in his face at the Bank of America Stadium sideline, channeling plenty of Broncos fans weary of the robotic quarterback’s inability to shake off a season-long slump that tilts his big trade from Seattle more toward the Seahawks by the week.

Lamar Jackson blasted a fan on Twitter for suggesting the Ravens let the quarterback leave in free agency following Baltimore's 28-27 loss to the Jaguars. That drew a rebuke from his coach who called it unwise to jump on social media after a loss and from the LBGTQ community for his offensive language.

The Washington Commanders drew ire on social media after unveiling a memorial to the late Sean Taylor that looked more like a mannequin from the team store than a statue of the beloved safety who was killed 15 years ago by an intruder.

And free agent Odell Beckham Jr.'s return trip to the NFL from a knee injury last year's Super Bowl took a slight detour Sunday when he was removed from an aircraft before takeoff at Miami International Airport after failing to respond to requests to buckle his seatbelt and appearing to be unconscious.

“Fearing that Mr. Beckham was seriously ill, and that his condition would worsen through the expected 5 hour flight, (flight crew members) called for police and fire rescue,” Miami Dade police officer Luis Sierra said in a statement. “As they tried to wake (Beckham) to fasten his seat belt, he appeared to be coming in and out of consciousness."

A Twitter post attributed to Beckham appeared to refer to the incident, saying, “Never in my life have I experienced what just happened to me,” and adding with a misspelling that he had “seen it alll.”

In Baltimore, Ravens coach John Harbaugh lamented Jackson jumping on Twitter in the moments after their 28-27 loss to the Jaguars, who overcame a seven-point deficit in the final minute of regulation for the first time in their 30-year history.

Jackson snapped back at a fan blaming him for Baltimore's loss using profane and inflammatory language, saying the fan “never smelt a football field” before later deleting his response.

Harbaugh said he spoke with Jackson on Monday about the star quarterback’s profane postgame tweet directed at a fan, saying the language Jackson used was out of character.

Jackson insisted on Twitter that he did not intend to disrespect anyone’s sexual orientation when he angrily responded to a dig following Baltimore's loss that ended with Justin Tucker coming up short on a 67-yard field goal.

Outsports.com, which covers LGBTQ sports news, published a piece about Jackson’s comments that said: “Jackson might not be homophobic, but his comment was. He would have been better off apologizing for the tweet in the first place as opposed to trying to defend its contents.”

Jackson's regrettable reaction followed the Jaguars' epic comeback in which Trevor Lawrence connected with Marvin Jones on a 10-yard touchdown pass with 14 seconds remaining, followed by a 2-point toss to Zay Jones.

In Denver, embattled rookie head coach Nathaniel Hackett said he spoke with both Purcell and Wilson about their brief sideline spat following a personal foul on Purcell during a field goal kick. Hackett insisted it wasn't a symptom of a locker room rift between the team's stingy defense and punchless offense that's averaging barely 14 points a game.

“You want every one of your football players to want to do anything to win. You want them to hold each other accountable and you want them to try to fire each other up," Hackett said. "I’ve always believed that it is a little different coming from a coach than it is coming from a player. Whenever it comes from the player—those guys, that means a lot to them.

"I appreciate his passion and understand it. I just don’t want him to get that personal foul in that situation. Besides that, I love when the guys are fired up. That’s what we ask for. We want everyone fired up.”

Fans in Washington were fired up over Taylor's tribute.

Instead of a statue, the memorial to Taylor was a glass-enclosed installation on the concourse of FedEx Field featuring a helmet, No. 21 jersey, pants and cleats stood up in mannequin form.

Some on social media pointed out the display included a strange mix of a Nike jersey, Reebok pants and Adidas cleats. The use of soccer cleats instead of football ones also sparked criticism, but Taylor’s daughter, Jackie, said it was intentional and called it a special tribute.

Seahawks linebacker Darrell Taylor saw to it that all the drama of the weekend wasn't relegated to the sidelines or the concourses.

Astonishingly, the Seahawks weren’t flagged for having too many men on the field.

So, kudos to Taylor for getting away with returning some of the drama to the field itself over the weekend and for giving an entirely new meaning to the Seahawks’ famed “12th Man.”

By David Brandt 60 minutes ago
By Teresa M. Walker an hour ago
By Josh Dubow 5 hrs ago
By Tom Withers 12 hrs ago
By Dennis Waszak Jr. 12 hrs ago