Brady to Tampa only tip of NFL's changing landscape 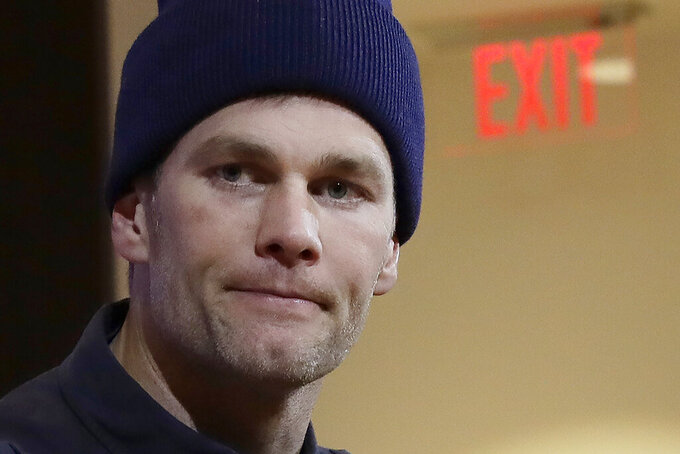 FILE - In this Jan. 4, 2020, file photo, New England Patriots quarterback Tom Brady listens to a question at his post-game news conference after the Patriots lost to the Tennessee Titans in an NFL wild-card playoff football game in Foxborough, Mass. Brady said on social media, Friday, March 20, 2020, he has signed with with the Tampa Bay Buccaneers. (AP Photo/Elise Amendola, File)

Upheaval is everywhere in the NFL. It won't likely end soon.

A free agency frenzy that has seen steady player movement — yes, players beyond Tom Brady have changed addresses — has been the focal point. With little to nothing else going on in sports, the NFL has grabbed headlines with business deals between players and teams.

Those transactions have changed the league landscape. But so have many other moves involving the draft, offseason programs and perhaps the upcoming season itself as the new coronavirus pandemic affects every aspect of our lives.

Here's a look at all of those elements in America's most popular and lucrative sport.

Awkwardness might be the keyword. The NFL barred players from visiting teams courting them and banned club personnel from traveling to meet with the free agents — both wise and necessary moves.

Physicals on which contract agreements are reliant could only be performed locally or by doctors mutually agreed upon between franchises and players. Signed contracts must be registered with the league before anything becomes official and players can get paid on their new deals.

That led to dozens of leaks of deals without teams being able to confirm them when the NFL business year began last Wednesday.

Through all that, million-dollar pacts emerged everywhere — some of them still unannounced by teams.

Brady leaving New England has been the mind-blowing move, naturally. Suddenly, a franchise that hasn't seen the postseason in a dozen years has some cachet. And the most dominant team of the past two decades, with Brady leading the Patriots to six championships in nine Super Bowl trips, has lost its essence.

And the other relocations through free agency and trades will require some studying up by fans. The most impactful moves so far, and with several big names still on the market, seem to be:

—QBs Teddy Bridgewater to Carolina and Philip Rivers to Indianapolis as free agents.

—WR Stefon Diggs dealt by the Vikings to the Bills, who haven't had such an accomplished receiver in years.

—Todd Gurley, merely the league's best running back from 2015-17 but now with knee issues, cut by the Rams and landing in Atlanta.

—Calais Campbell, one of the best edge rushers around, dealt by Jacksonville to Baltimore.

With the huge extravaganza the draft has become scrapped, the NFL soon will announce its altered format.

Look for something resembling a studio TV show with much of the information (and misinformation) flow fans are accustomed to. There's even chatter about prospective picks being asked to allow camera crews in their homes for reactions to being selected.

By far the biggest effect of the pandemic on the draft is the elimination of pro days at various schools. While some see those as outings manufactured and managed by the collegians and their representatives, many NFL teams find significant value in them.

As for Las Vegas, it will get another draft, perhaps the 2022 selections that are unspoken for right now. Next year will be in Cleveland, 2023 in Kansas City.

Losing OTAs and minicamps in the spring would seem minor — most everything about the machinations of sports right now can feel that way — but they are important to teams in several ways.

If a new coaching staff is in place, those get-togethers are when players begin grasping new playbooks and philosophies and strategies. Not to mention getting to know the coaches they'll be working under. And new teammates.

Team chemistry begins to build during those sessions. Fitness can be gauged. So can dedication and perseverance.

Out-of-shape players will be the norm this summer, and getting them back into football fitness will present a real challenge.

The schedule might not be in flux for the regular season set to begin on Sept. 10, probably in Kansas City. But the preseason, from when training camps can open and what restrictions exist — caused by the new coronavirus or by the labor agreement that went into effect this month — to actually playing exhibition games could be in question.

We've already seen how shoddy September contests can be with so many regulars sitting out August games. What if the NFL needs to cancel preseason games?

Then again, many fans might applaud that, eager for the real stuff, no matter how sloppy it might be early on.