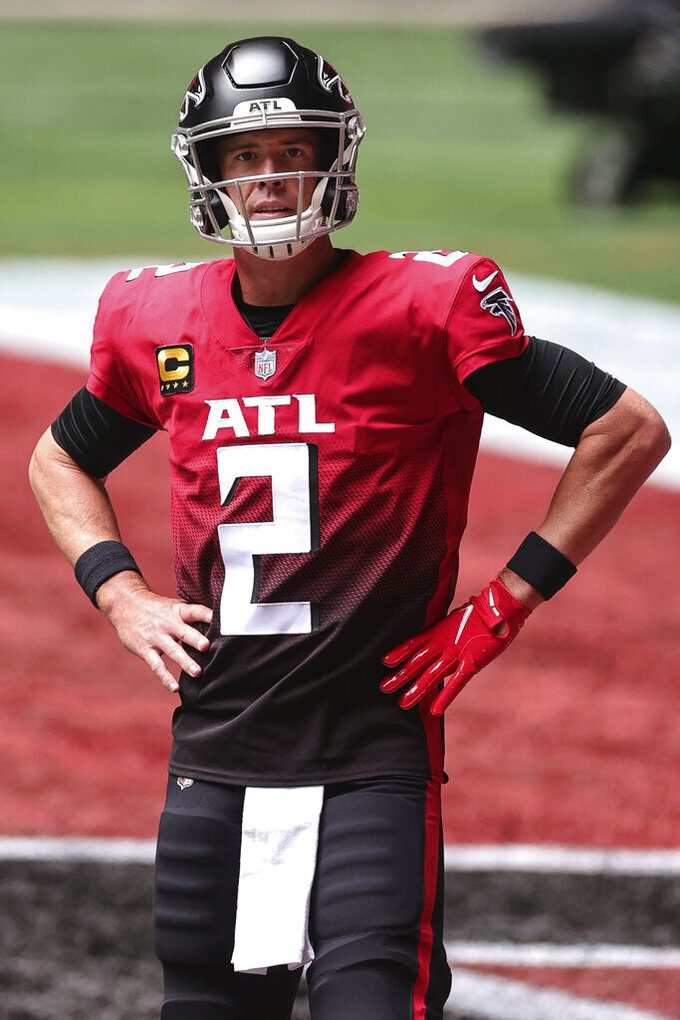 The quarterbacks also are shaping their places in their teams' long-term plans entering Sunday's game.

Lock, in his second year, is trying to prove he's the right leader to make the Broncos a playoff contender.

Ryan, 35 and in his 13th season as Atlanta's starter, wants to disprove the theory that it's time for the Falcons to rebuild, starting at the top.

Ryan says he wants to finish his career in Atlanta. After general manager Thomas Dimitroff and coach Dan Quinn were fired last month following an 0-5 start, there was speculation the Falcons would consider trade-deadline interest in their biggest stars, including Ryan and wide receiver Julio Jones.

It was no surprise the deadline passed with no Falcons trades. Falcons owner Arthur Blank and president Rich McKay say they want a new GM and coach to make those most important roster decisions that will shape the team's future.

Lock threw three fourth-quarter touchdown passes to lead Denver to a 31-30 comeback win over the Los Angeles Chargers last week. It was an important confidence-building performance by Lock after he threw four interceptions with no scoring passes in his previous two games.

Coach Vic Fangio said the comeback win can be a career-boosting game for Lock.

“He definitely needed it,” Fangio said. “Like I said, that’s the only way you’re going to truly have confidence and feel good. Now you’ve got something to build on. ... Hopefully this will spring him forward through the rest of the season.”

The Broncos (3-4) have won three of their past four games since opening the season with three straight losses. Denver's only setback since the 0-3 start was a 43-16 blowout loss to Kansas City on Oct. 25.

The Falcons (2-6) have won two of three under interim coach Raheem Morris, who was promoted from defensive coordinator after Quinn was fired following an 0-5 start.

Morris has talked of the Falcons imposing their will on opponents. It hasn't been an easy lesson for Atlanta. As part of the 0-5 start, the Falcons became the first team in NFL history to squander fourth-quarter leads of at least 15 points in back-to-back games.

More heartbreak came in a 23-22 loss to Detroit on Oct. 25 in yet another fourth-quarter meltdown. Todd Gurley fell on the goal line for a touchdown when he was trying to avoid scoring late in the game, leaving the Lions time for their last-second win.

Finally, the Falcons displayed the grit Morris seeks when Blidi Wreh-Wilson's late interception preserved a 25-17 win over Carolina on Oct. 29.

The Broncos canceled practice Wednesday after two more players were placed on the NFL’s COVID-19/reserve list, including DE Shelby Harris. That brings the number of coronavirus infections/exposures to three players, three assistant coaches, two executives and other staffers at team headquarters over the past few weeks. Also out is RG Graham Glasgow, who will miss his second straight game.

Falcons defensive end Takk McKinley will miss his second straight game with a groin injury. He drew criticism from Morris after using his Twitter account to express his disappointment the team didn't accommodate his request to be traded. McKinley, a first-round pick in 2017, has struggled with injuries since getting a combined 13 sacks in his first two seasons.

WOES IN THE RED ZONE

The Falcons are averaging 401 yards per game, sixth best in the NFL, but the offense has sputtered too often in the red zone. That was the focus in practice this week.

“Touchdowns," Ryan said. “That’s the number one thing. Finding a way to do it. I think that comes with running the football well. I think we’ve done a pretty good job of that. We have to capitalize in the pass game when we get opportunities.”

Although WRs KJ Hamler, Jerry Jeudy and TE Albert Okwuegbunam, all rookies, are getting the publicity, it was third-year pro DaeSean Hamilton who sparked Denver’s comeback last week with a key catch on a third down and a 40-yard TD catch-and-run.

“I think the one who might not get talked about enough would be DaeSean coming in and playing a massive game for us,” Lock said. “He hasn’t really been called on much this year but the reason he’s on this team is because he’s Mr. Reliable.”