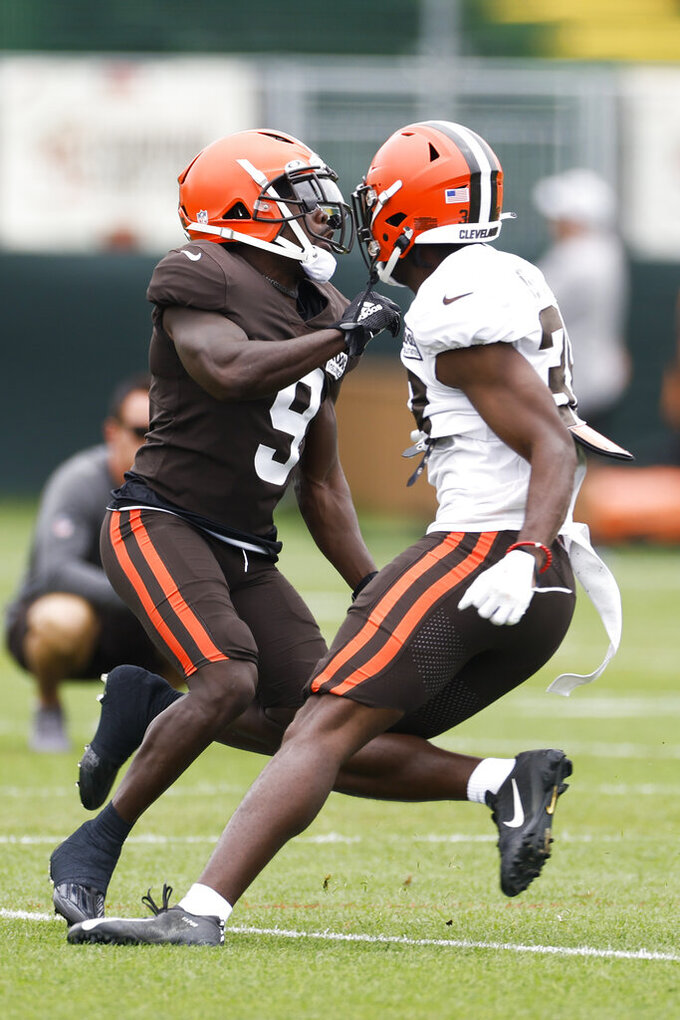 BEREA, Ohio (AP) — Jakeem Grant Sr.'s first season with the Cleveland Browns changed in an instant. It might be over.

The speedy wide receiver and return specialist likely tore his left Achilles tendon on Tuesday, a tough personal blow and another setback for Cleveland's return game which he was going to help turn around.

Grant was carted off the field after getting hurt while battling cornerback A.J. Green during a one-on-one passing drill. Grant didn't land awkwardly, but it quickly became obvious he was badly hurt.

Grant pounded his hand into the grass and writhed in pain on the ground as two trainers came to assist him. He was then placed on a cart and driven into the team’s facility as practice continued.

The 29-year-old is scheduled to undergo further testing.

“I really feel awful for Jakeem," Browns coach Kevin Stefanski said. "We’ve witnessed how hard the young man has worked since he got to our team. We all realize injuries are a part of our game, but that doesn’t make it any easier to accept especially for someone that works as hard and carries himself like Jakeem.”

Grant made the Pro Bowl last season with the Chicago Bears. The 5-foot-6 speedster averaged 13.9 yards on punt returns and 23.4 yards returning kickoffs. He played the previous five seasons with the Miami Dolphins.

The Browns signed him to a three-year contract worth up to $13.8 million in March.

Cleveland's return game didn't produce much last season and Grant was viewed as a major upgrade to the unit. He going to return punts and kickoffs.

The next options for returners are running back D’Ernest Johnson and wide receivers Anthony Schwartz, Demetric Felton and Donovan Peoples-Jones.

On Sunday, Grant said he wanted to be known as more than an elite returner.

Grant's injury is the latest in what has been a tough camp for the Browns' wide receivers.