Browns place Grant on IR after he tore Achilles in practice 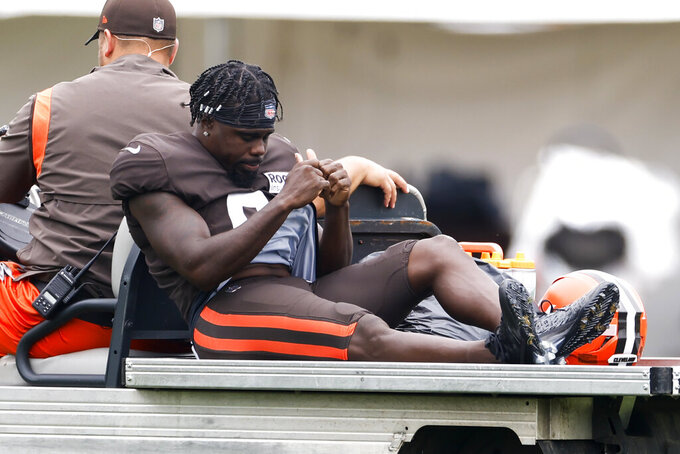 Cleveland Browns wide receiver Jakeem Grant Sr. is carted off the field after getting injured during a drill at the NFL football team's training camp, Tuesday, Aug. 9, 2022, in Berea, Ohio. (AP Photo/Ron Schwane) 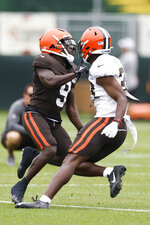 Grant will miss the season, forcing the Browns to find another option to fix their lackluster return game. The 5-foot-6 Grant was signed as a free agent in the offseason to handle punt and kickoff returns.

He made the Pro Bowl for the first time last season while playing for Chicago (11 games) and Miami (four). Grant has returned four kickoffs for touchdowns and two punts for scores in six seasons as a pro.

The Browns gave him a three-year contract worth up to $13.8 million, believing he could turn their return game from dismal to dangerous.

Grant was injured Tuesday at the end of a pass route in one-on-one drills while battling cornerback A.J. Green for the ball. Grant, who suffered a similar tear in 2018 with Miami, knew immediately he was seriously hurt, and pounded the ground in frustration and distress before being carted off.

The Browns said imaging showed the tear and that Grant will soon undergo surgery.

Grant was also part of a receiving group, which has had a rash of injuries during training camp. Undrafted rookie Isaiah Weston suffered a season-ending knee injury earlier this month.

With Grant lost, the Browns will have to start fresh in finding someone to handle returns. Schwartz and wide receivers Demetric Felton and Donovan Peoples-Jones will be among those getting an opportunity.

The Browns will also scour the transaction wire for outside help.