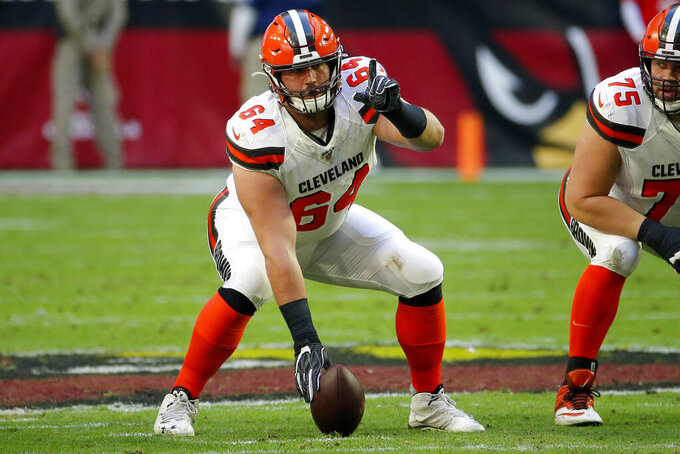 FILE - In this Dec. 15, 2019, file photo, Cleveland Browns center JC Tretter (64) lines up against the Arizona Cardinals during the first half of an NFL football game in Glendale, Ariz. The Browns center and NFLPA president says he will push for daily testing for the coronavirus as the NFL ramps up to a possible season. (AP Photo/Rick Scuteri, File)

BEREA, Ohio (AP) — Cleveland Browns starting center JC Tretter underwent a surgical procedure on his knee Thursday and could be out for an extended period.

First-year coach Kevin Stefanski revealed Tretter's unexpected surgery at the start of his Zoom call with reporters on Friday.

Stefanski did not provide any details on Tretter, who is also the NFLPA President and has been heavily involved in talks over the past few months between the union and NFL to get training camps ready during the COVID-19 pandemic.

Stefanski would not say how long Tretter could be out, but it's likely that he could miss at least a couple weeks. Until he's back, rookie Nick Harris will be take his spot in the middle of Cleveland's revamped line.

The Browns, who open the season on Sept. 13 at Baltimore, selected Harris in the fifth round in this year's draft.

Also, star defensive end Myles Garrett is not practicing after “tweaking” his hamstring, Stefanski said. There is no timetable on a return for Garrett, who recently signed a five-year, $125 million contract extension.

The 29-year-old Tretter has been one of Cleveland's steadiest players over the past few seasons. He has played in all 48 games with the Browns since signing with them as a free agent in 2017 after three seasons in Green Bay.

Tretter played much of the 2018 season with a badly sprained ankle that forced him to sit out the majority of practices but not any games.