Catching on: Langley switches from cornerback to receiver 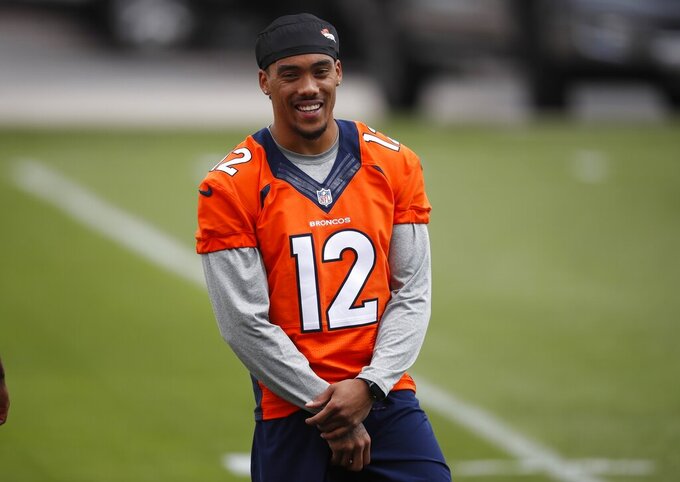 FILE - In this April 16, 2019, file photo, Denver Broncos wide receiver Brendan Langley takes part in drills during an NFL football veterans minicamp at the team's headquarters in Englewood, Colo. Langley is switching from the defensive side of the ball by leaving his position as cornerback to become a wide receiver on the Broncos' offensive this season. (AP Photo/David Zalubowski, File)

ENGLEWOOD, Colo. (AP) — Here's the catch: Brendan Langley reached a point where he would rather receive passes than pick them off.

So, the Denver Broncos third-year player is calling an audible and going over to the other side — from cornerback to wide receiver.

No offense, he just prefers offense.

"It's going well," Langley said of learning the ropes at wideout after Monday's organized team activities. "It's not really a transition for me. It's going back to my natural element."

Langley has long floated between DB and WR. During his high school days in Marietta, Georgia, he was a standout at both. At the University of Georgia, he was primarily a defensive back. After transferring to Lamar, he began as a receiver (catching a 20-yard TD pass against Baylor) before moving over to defense that season (he had an 86-yard interception return for a score against Incarnate Word). In his two seasons at Lamar, he finished with seven interceptions for 135 yards while hauling in four passes for 51 yards.

Given his versatility and quickness (4.43 in the 40 dash), the Broncos drafted the cornerback during the third round in 2017 . His rookie season, Langley suited up in 11 games on special teams, which included a 61-yard kickoff return against the Los Angeles Chargers. Last season, Langley was cut out of camp before being quickly signed to the practice squad. He played in five games on special teams at the end of the season.

Still, he turned a few heads — on scout team. When the Broncos needed someone to mimic a fast wideout in practice, Langley was summoned into duty.

"It felt natural," the 6-foot, 199-pound Langley said. "There weren't too many hiccups to the learning curve. It felt good."

At the exit interviews following the season, Langley brought his iPad with him for his meeting with Broncos boss John Elway. He wanted to convince Elway that receiver could be his best way to help the team.

"I had the film from scout team. I had my numbers from high school when I was receiver," recounted Langley, who now wears No. 12 instead of No. 27. "I was ready to do whatever I had to do to convince him to let me make that switch.

"But then Mr. Elway smiled and said, 'I was going to ask you the same thing.'"

This offseason, Langley's been working out in California and hauling in 500 passes a day. He also watches film of receivers to study their route running techniques.

Anything to catch on. Anything to ease the conversion from one position to another.

He's also picking up pointers from Emmanuel Sanders, DaeSean Hamilton and Courtland Sutton, who actually know firsthand what Langley's going through. Sutton said he started out as a safety at Southern Methodist before switching to receiver.

"It's rough," said Sutton, who had 42 catches for 704 yards last season as a rookie. "Even coming out of college, going into the league, I wasn't fully fine-tuned to play this (receiver) position. For a guy who played receiver, moved to defense and then played defense when he first got into the league and is now making that transition to receiver while in the league, it's tough. But he's handling it really well. He's learning as much as he possibly can, from everybody. He takes a little advice from everybody."

Langley is banking on his experience as a cornerback to give him a helping hand at receiver. There are small details that can betray a cornerback's tendencies.

"I can tell by a corner's stance what he's playing," Langley said. "If he's flat-footed, he's in cover-2. With one foot back, he's going to backpedal. I used to do those same things."

"In defensive back drills, sometimes you go into the individual drills and they're like, 'We don't need a ball,'" Langley said. "That felt awkward to me. I need a ball at all times."