Chiefs gaze ahead to first AFC title game since January 1994 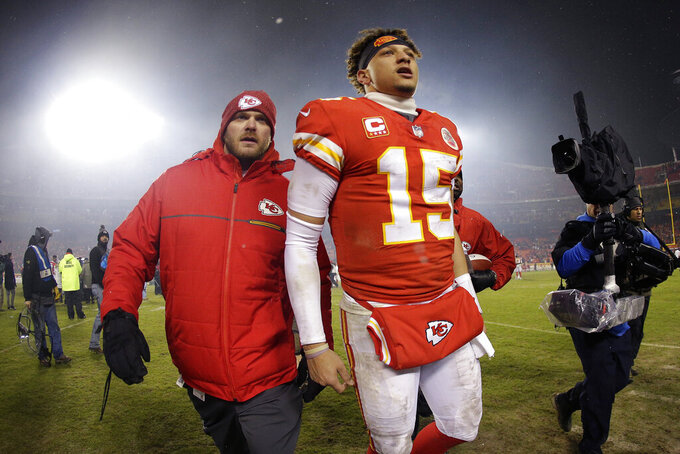 KANSAS CITY, Mo. (AP) — Nobody in the Kansas City Chiefs locker room is more keenly aware of the franchise's heartbreaking playoff history than Xavier Williams, who grew up a short drive away from Arrowhead Stadium.

He was just a toddler when his hometown team lost in the AFC title game in January 1994, the last time they were on the cusp of playing in a Super Bowl. He endured the childhood disappointments, and the playoff losses while he was starring in high school and at Northern Iowa.

So when the Chiefs finally punched their ticket back to the AFC championship game with a 31-13 win over the Indianapolis Colts on Saturday, there was nobody better to put it into perspective.

"I think if you're not from here, you don't know," Williams said. "People have been waiting for a long, long time. You could just feel how electrifying it is around the city, from the start of the season until now, tonight. A blizzard going on and the crowd sold out. It's something."

The Chiefs certainly gave them a reason to brave the weather.

Patrick Mahomes threw for 278 yards while running for a touchdown. Damien Williams ran for 129 yards and a score against a Colts defense that had not allowed a 100-yard rusher all season. Tyreek Hill also had a touchdown run, while Travis Kelce topped 100 yards receiving.

The Chiefs' defense, which was so maligned all season, shut down Andrew Luck and the Indianapolis offense in helping Kansas City to its first playoff win over the Colts in five tries.

"Everybody grows up talking about playing for the hometown team," Williams said. "I mean, it's a great opportunity we've got. And now we've got an even bigger opportunity, a chance to bring a Super Bowl to your hometown. That's what dreams are made of."

Standing in the way: The Los Angeles Charger, who split with Kansas City during the regular season with each team winning on the road, or the New England Patriots, who rallied in the final seconds to beat the Chiefs in a 43-40 barnburner at Gillette Stadium in Week 6.

The Chiefs don't really care who earns the right to visit them Sunday.

"We don't care who we're going against. We can be going against brick walls and will find a way to beat them," Chiefs defensive tackle Chris Jones said. "We're peaking at the right moment."

The Colts thought they were, too.

They started 1-5 before ripping off nine wins in 10 games to reach the playoffs. Then they joined the 2015 Chiefs as the only teams in NFL history to start so abysmally and win a postseason game, romping through the Houston Texans a week ago to earn a shot at the AFC's top seed.

They faced a 17-0 hole before they realized what had happened, and it was 24-7 at halftime with their only points coming on a blocked punt that was recovered in the end zone. In fact, the Colts didn't score on offense until Luck hit T.Y. Hilton with 5:31 left in the game.

By that point, the Chiefs were cruising toward the next round of the playoffs.

"This is the type of game you dream about playing on the road," Luck said. "It seemed, myself at the top of the list, we took our turns sort of messing the plays up. And when that's happening and you can't stop the bleeding, it's tough. It's too hard to win on the road against the No. 1 seed."

As the Chiefs move on and the Colts hit the offseason, here are five takeaway items from Saturday:

VINATIERI'S MISSES: Colts kicker Adam Vinatieri missed a 23-yard field goal just before halftime that could have made it a 24-10 game. He also missed an extra point in the fourth quarter. "The first one I just didn't get good footing. It's silly," he said. "You need every point you can in a playoff game and we needed that one for sure. That's a momentum swing."

SACK ATTACK: Justin Houston had two sacks and Dee Ford had a strip-sack, something he had done seven times this season. The Chiefs also batted several of Luck's passes at the line of scrimmage in what was easily their best defensive performance all season.

HOBBLED HILTON: The silver lining of the loss for Hilton is that he can finally rest his ankle, which has been bothering him for some time. "It needs rest," he said. "I got a low and a high ankle sprain on one ankle, so I'm dealing with two injuries in one, which is pretty rough. But I dealt with it. Gave the team everything I had. It was a great season."

INJURY WATCH: The Chiefs played without safety Eric Berry (heel) and running back Spencer Ware (hamstring), and it's unclear whether either will be available next week. Wide receiver Sammy Watkins played for the first time since hurting his foot in November and made it through the game.

RUNNING WILD: Kareem Hunt was supposed to lead the Chiefs into the playoffs, but he was thrown off the team midway through the season. Ware has been hobbled by shoulder and hamstring injuries. But Kansas City hasn't missed a beat because of Williams, a journeyman who has played so well in climbing from the No. 3 running back to the starter that he's already earned a contract extension. "He runs his tail off for everybody on this team," Kelce said. "Sure enough, he showed today he can finish a game for us."