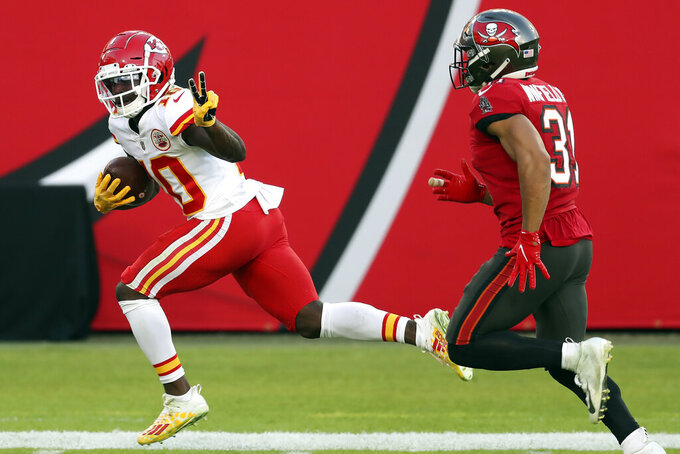 It was just the latest example of the conundrum faced by Kansas City's opposing defenses.

When the Buffalo Bills steadfastly refused to let Mahomes beat them through the air, Clyde Edwards-Helaire led a ground game that ran 46 times for 245 yards. When the Las Vegas Raiders attempted to slow down Hill, tight end Travis Kelce beat them for back-to-back 100-yard receiving games. When the New York Jets managed to hold all those guys in check, third-string wide receiver Mecole Hardman pulled in seven passes for 96 yards and a score.

Indeed, the Chiefs are an old cliché taken to an extreme: pick your poison.

“They can line up the '85 Bears,” said Chiefs wide receiver Sammy Watkins, who only recently returned from a hamstring injury, “and as long as we're doing our thing, we're going to be OK.”

Or exceptional. The Chiefs lead the league in scoring, passing offense and total offense. Mahomes leads the NFL in yards passing, ranks second in quarterback rating and third with 30 touchdown throws. Hill has 1,021 yards receiving, trailing D.K. Metcalf of the Seattle Seahawks for the league lead by a mere 17 yards, and Kelce is third with 978 yards receiving.

That's just through the air, too. Edwards-Helaire is among the top 10 in yards rushing with 692 during his rookie year, even though he's split time with Darrel Williams and LeVeon Bell much of the season.

“Getting everybody comfortable within the offense helps us to execute at a high level,” Mahomes explained, “so that's why you're seeing guys like Kelce and Tyreek get off more and more as the season goes on. When you have other playmakers out there, you can't put all your guys on top of those guys. When you do, we have guys like Sammy and Mecole and (Demarcus Robinson) and LeVeon and Clyde that can go out there and make plays as well.”

Nobody has been able to make plays quite like Hill and Kelce, though.

With all that single coverage in Tampa Bay, Hill merely set the Chiefs record with six receptions of at least 20 yards. He also made it five straight games with a touchdown catch and three straight games with 100 yards receiving, and has proved over the course of the season that he's a complete wide receiver rather than just a downfield speedster.

“He's the fastest wide receiver I've seen in all my time,” acknowledged Denver Broncos coach Vic Fangio, who will try to slow him down Sunday night. “And he's not just a speed guy. He runs great routes. He gets in and out of things. He's a great runner after the catch. He's a special player and they use him well.”

They also put Kelce in all the right places — or rather, Kelce finds all the right places himself. He has an uncanny ability to find the soft spot in a defense, and the result has been a streak of 106 games with at least one reception, and he needs just 22 yards receiving to reach 1,000 yards for the fifth consecutive year.

“The greatest thing about him is he identifies coverage very well and can sit in zones and find those creases and turn them into big plays," Broncos tight end Noah Fant said. “He's one of the greatest to do it.”

The good thing for Fant? He doesn't have to figure out a way to stop his counterpart. That will fall on the Denver defense, which actually fared reasonably well against Kansas City when they met last month.

“That’s just a problem the defensives have when they go against us. We have so many weapons,” Mahomes said. "Last week it was Tyreek's week, but I'm sure other guys will make big plays the rest of the season.”

NOTES: CB Bashaud Breeland (stomach virus) and LB Dorian O'Daniel (sprained ankle) did not practice Wednesday. ... Reid said he's confident the Chiefs won't have the same problem with their entire quarterback room being forced into quarantine that the Broncos had last week, when Denver was forced to use a practice squad quarterback under center for a game against New Orleans. “Those guys are flawless about wearing their masks. They keep those things on relentlessly,” Reid said. ___