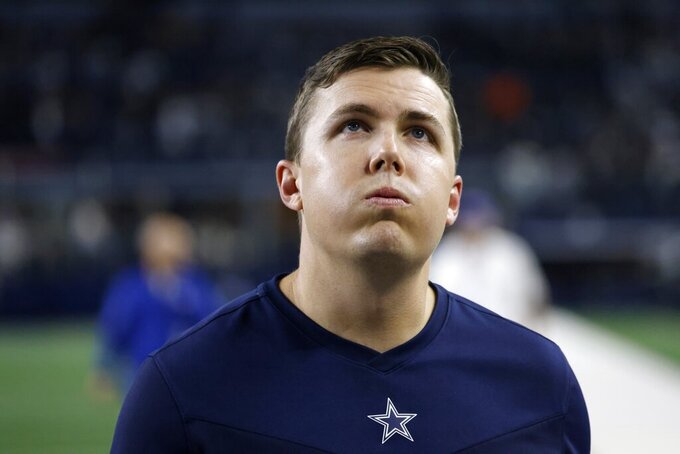 ARLINGTON, Texas (AP) — Ezekiel Elliott's health is a concern, Dak Prescott's accuracy is off at times, and the Dallas offense has sputtered to the point that the Cowboys haven't held a lead at all in their three losses in a four-game stretch.

So forget for a moment about a franchise-record 166 penalty yards, fueled mostly by cornerback Anthony Brown's staggering four pass-interference fouls, the last costing the Cowboys the game in a 36-33 overtime loss to Las Vegas on Thanksgiving.

“We need to learn to win those games ugly,” coach Mike McCarthy said Friday. “Winning ugly is very important, particularly in this part of the season. Throughout the league, it’s attrition time. This is where you have to do the little things, particularly in the fourth quarter, and in game situations to bring home the victory.”

The first and second quarters have put the Cowboys (7-4) in difficult spots lately. All three of the losses in the four-game stretch were to AFC West teams, and Dallas trailed by double digits before halftime in each one.

Dallas plays the first of three consecutive road games at New Orleans on Thursday, and it won't be easy to get that flow in the running game with Elliott appearing slowed a little more each week by his ailing right knee. The two-time rushing champion has had his season low in carries (nine) each of the past two weeks. The Cowboys have been held under 100 yards rushing in four of the past five games.

For the first time Friday, McCarthy acknowledged concern over Elliott's health. The sixth-year back continues to sidestep those questions. Backup Tony Pollard had more carries against the Raiders, a first in his three seasons.

“He was fighting to get back in there every time, all day yesterday,” McCarthy said. “Zeke’s running style is ferocious. He gives a pounding and he takes some hits. We need to evaluate that and this week we’ll see what the preparation looks like for him.”

Prescott was almost even with Arizona's Kyler Murray in completion percentage through six weeks, which was when the Dallas quarterback strained his right calf. He's dropped off significantly since, and a poor throw in overtime against Las Vegas was costly with the Cowboys deep in their end after the kickoff.

“I think for all of us, we've just got to find a way to play cleaner, simple ball,” offensive coordinator Kellen Moore said.

The Cowboys still lead the NFC East and keep pointing to the reinforcements on the way. Receivers CeeDee Lamb (concussion) and Amari Cooper (COVID-19) should be back against the Saints. Cooper has missed two games. Defensive end DeMarcus Lawrence (broken foot) appears on track to play in what would be his first game since the opener.

Uncertainty is clouding the offensive line. Coaches won't talk about it, but their actions speak differently. Benched starters La'el Collins and Connor Williams were brief first-half replacements for right tackle Terence Steele and left guard Connor McGovern, the players who took their jobs.

Trysten Hill, who missed the first eight games recovering from a knee injury last year, led all Dallas defensive linemen in tackles against the Raiders with five from his interior spot. But the third-year player also has to answer for why he punched Las Vegas left guard John Simpson during a brief confrontation after the game.

The Dallas secondary went without an interception for the third time in five games, which means the Cowboys aren't countering their tendency to allow big plays. Dallas allowed a season-high eight plays of at least 20 yards, and six were passes.

S Donovan Wilson will miss at least two more games with shoulder and chest issues after going on injured reserve before the Las Vegas game. ... TE Blake Jarwin was moved to the COVID-19 reserve list from injured reserve. He hasn't played since the Halloween victory at Minnesota because of a hip injury.

91 — yards in penalties against CB Brown vs, the Raiders were the most in a game by a single player since Green Bay DB Tramon Williams had 106 yards on three penalties in a 27-14 win over Baltimore in 2009.

The Cowboys actually have to do some scoreboard watching this weekend when it appeared a month ago they would run away with the NFC East. Philadelphia has won three of four, and Washington is on a two-game winning streak. Four of Dallas' final five games are in the division.