Cooper catches on with Browns, quickly connects with Watson 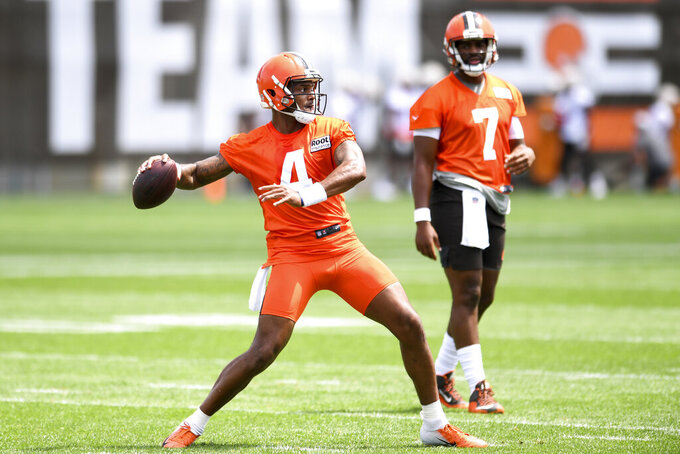 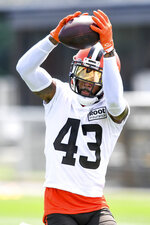 BEREA, Ohio (AP) — In his short time with Deshaun Watson, Browns wide receiver Amari Cooper has gained an appreciation for the quarterback's skills.

Cooper's impressed with Watson as a runner, passer and playmaker.

"He can do everything,” Cooper said Thursday. “I call him the magician.”

As the Browns continue to await word on whether Watson will be suspended by the NFL, Cooper, acquired via trade from the Dallas Cowboys two months before Cleveland signed the three-time Pro Bowl QB, has been trying to develop chemistry with his new teammate.

The unpredictable situation is hardly ideal for Cooper. But the 28-year-old can't worry about what may or may not happen. Whether Watson is Cleveland's starter or it falls to backup Jacoby Brissett, Cooper has to be ready to perform.

The Browns had no update on Watson, who is facing a potential suspension from league disciplinary officer Sue L. Robinson after being accused of sexual misconduct by two dozen massage therapists in Texas.

The former federal judge will decide whether Watson violated the league's personal conduct policy and discipline him accordingly.

In the meantime, the Browns are proceeding as if Watson will be their starter while bracing for the possibility they could be without him for multiple games.

For Cooper, Cleveland is another fresh start after four seasons with Dallas. He had 68 catches for 865 yards and eight touchdowns last season, but missed two games with COVID-19 and the Cowboys decided to part with him primarily because of his $20 million contract.

Cooper said he wasn't unaware of recent comments by Cowboys owner Jerry Jones, who said the decision to trade the four-time Pro Bowl receiver was based more on his “availability than ability.”

Whether he heard Jones' remarks or not, Cooper said being dealt will light a fire.

“To be traded and stuff like that, it’s motivating,” he said. "If you don’t have a chip on your shoulder, then what do you have? Even if you don’t get traded or released by a team, there should always be some type of motivating factor there.”

Cooper immediately moved to the top of Cleveland's depth chart — a No. 1 target for Watson or Brissett. Not the fastest receiver, he's an adept route runner with reliable hands and 46 touchdowns over eight seasons.

Cooper's also reserved, a quality not always present in receivers, some of whom have the reputation of being divas.

“He's a little bit more lowkey, not loud and boisterous, but he's a great teammate,” said coach Kevin Stefanski. "He's brilliant, smart. I sit right behind him in meetings. He's as smart of a player as I've been around.

"I really enjoy having him out here. I enjoy watching him work. He's such a big, imposing figure at that position, and to watch him go through drills and take extra reps, he will not take himself out. He's a pro’s pro all of the way.”

NOTES: Second-year WR Anthony Schwartz suffered a left knee injury midway through practice. Schwartz was examined by a trainer before walking to the facility. The team said he will undergo further evaluation. He had just 10 catches as a rookie but is being considered for the No. 3 spot behind Cooper and Donovan Peoples-Jones. With Schwartz out and rookie WR David Bell (foot) currently sidelined, general manager Andrew Berry might need to find outside receiving help. ... The Browns wore protective Guardian Caps over their helmets for the first time. The NFL is requiring linemen, linebackers and tight ends to wear the protective padding in practice through the second preseason game. The league hopes the extra layer can reduce concussions by decreasing helmet-to-helmet contact. The Browns won't wear full pads until next week.