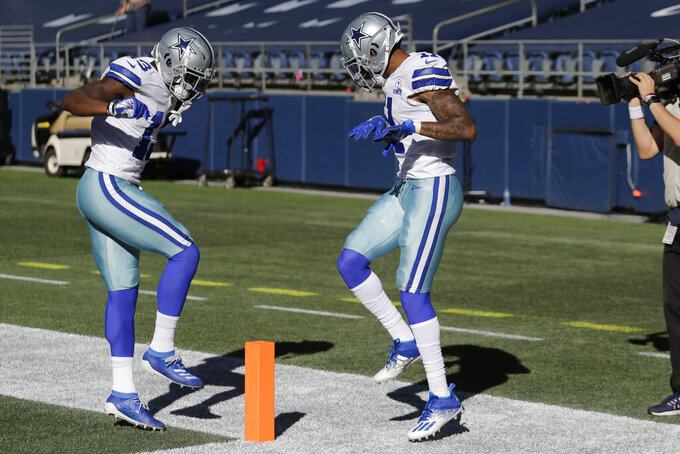 SEATTLE (AP) — Another week, another big deficit for Dak Prescott and the Dallas Cowboys to try and overcome.

The trend is becoming troubling, especially with the Cowboys at 1-2 after Sunday's 38-31 loss to Seattle.

“We’ve got to get out of our own way, be cleaner with the ball, play smarter football, find a way to start faster, whatever it is,” Prescott said. “We’re going to figure out a way to get this right and clean it up.”

For the second straight week, Prescott nearly engineered an improbable comeback. He was brilliant in the second half against Seattle, aside from his fumble on the first play of the third quarter.

Prescott gave Dallas a chance for a statement road victory over the Seahawks on a day Russell Wilson was setting touchdown records. But the issues that surfaced in a Week 1 loss to the Rams and last week's wild comeback victory over Atlanta showed up again.

“Obviously it’s going to be frustrating. We’ve just got to make those little plays early on in the game that we’re not getting, count. We’ve got to make them count,” wide receiver Michael Gallup said.

There was a muffed kickoff that led to a safety. There was one missed extra point that rattled an upright, and another that was blocked. And there were the two turnovers that led to 14 points for Seattle. Prescott was intercepted by Shaquill Griffin late in the first half, which led to Tyler Lockett's third touchdown reception and a 23-15 Seahawks lead.

Prescott was stripped by Benson Mayowa on the first play of the second half. Two plays later, Wilson hit Jacob Hollister for another TD and the Cowboys trailed 30-15.

“We will always start and stop with the capability to take care of the football and take it away and we haven’t gotten that done in the last two weeks,” Cowboys coach Mike McCarthy said. “We need to change that quickly or we are going to be in these battles each week. It’s difficult to overcome turnovers.”

To the credit of Prescott and the Cowboys, they nearly did. Prescott picked on Seattle's porous secondary, finishing 37 for 57 passing for 472 yards, setting career highs in yards and completions. He was 24 of 35 for 291 yards and two touchdowns in the second half alone.

McCarthy has relied heavily on the arm of Prescott, who is averaging more than 47 attempts and nearly 400 passing yards per game. Ezekiel Elliott, who had 185 yards rushing through Dallas’ first two games, was held to 34 yards on 14 carries and didn’t have a run longer than 9 yards.

Prescott found plenty of open receivers against Seattle in the second half. He tossed a 43-yard TD to Gallup with 13:07 left that pulled Dallas within 30-28 and Greg Zuerlein's field goal with 3:59 left gave the Cowboys a 31-30 lead.

But after finding ways to shut down Wilson for most of the second half, the Cowboys couldn't make a final stop. Wilson led Seattle 75 yards in eight plays — including a key fourth-down conversion — and hit DK Metcalf for the go-ahead score with 1:47 left.

“We just left too many opportunities out there," safety Xavier Woods said. "We didn’t start fast in the first half. We came out slow and they put up too many points, and it was just too big of a deficit to come back. In the second half we played a lot better but that last drive we could’ve got some stops to kill it.”

Prescott had one last chance to force overtime or potentially win the game. Dallas reached the Seattle 22 on its final possession, but Prescott was sacked on second down and on the next play was forced to scramble from a sack and his desperation throw to the end zone was intercepted.

“I’m never going to shy away from the moment, having the ball in my hands, having a chance to win the game,” Prescott said. “I want to make those throws and I want to have that opportunity. We’ve just got to be better starting with myself of converting those and making more of these one-score games wins for us.”