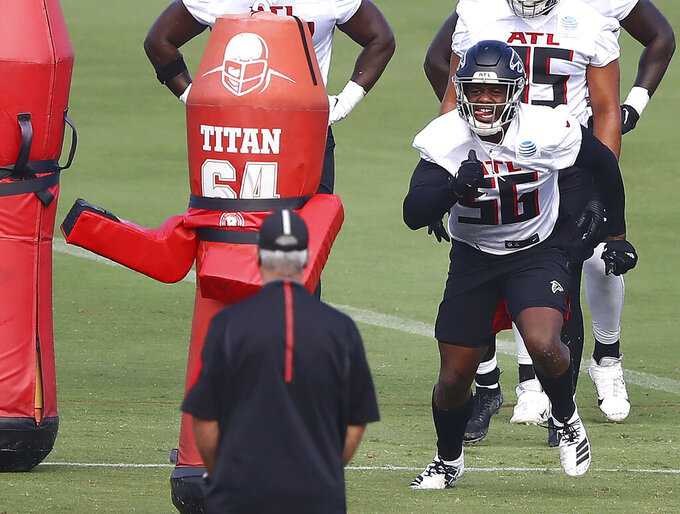 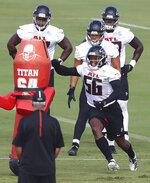 FLOWERY BRANCH, Ga. (AP) — Dante Fowler Jr. hustled through an agility drill Wednesday, then took off toward the other end of the practice field, leading the way with a couple of Atlanta Falcons teammates.

He's also taken his career in a different direction.

Once pegged as a troublemaker who seemed likely to be a first-round bust, Fowler is coming off his best season with the Los Angeles Rams.

Now, he's joined a Falcons team that is desperate for an elite pass rusher.

Fowler is embracing the expectations.

“My first few years in a league, I had some bumps, some growing pains,” he conceded. "There was a learning curve that will sharpen the best of us. I'm just happy it happened early in my career and not in my later years. There's people out here who have a lot of great success in the beginning, but they don't know how to handle it. I'm happy it happened to me early. Now, I'm ready to be a pro for the next 10 years.”

Fowler was the third overall pick in the 2015 draft by the Jacksonville Jaguars, who were enamored with his enormous physical skills and overlooked some major red flags in his personal life.

Maybe things would've been different if he had not torn a knee ligament in his very first minicamp, knocking him out for an entire season.

Whatever the case, Fowler endured 3 1/2 tumultuous seasons with the Jaguars, piling up most of his headlines for misdeeds off the field.

An arrest in Miami Beach on misdemeanor charges of assaulting a police officer and resisting arrest. A video that showed Fowler refereeing a violent fight between his girlfriend and an ex-girlfriend. Another arrest after he allegedly hit a man following an argument about Fowler’s driving, then took the victim's grocery bag and threw it in a lake. Not to mention a long list of traffic violations.

The Falcons have seen a different side of Fowler since he joined the team during free agency, signing a three-year contract worth up to $48 million.

“Dante is a great player and a great teammate,” cornerback Isaiah Oliver said. “He's helped a lot of the defensive linemen so far — the younger guys especially — with their techniques. I think it's a big boost for our team to have someone who can get the quarterback off his spot, hurry throws and get sacks. I'm excited to play with him.”

Coming off two straight losing seasons, the Falcons must get more pressure on the quarterback to have any hope of turning things around.

In 2019, even with a late-season surge by the defense that helped save coach Dan Quinn's job, they ranked next-to-last in the league with just 28 sacks.

The team cut ties with Vic Beasley, who had led the league in sacks during Atlanta's 2016 run to the Super Bowl but never came close to duplicating his All-Pro season.

Enter Fowler, who is eager to realize his enormous potential.

“I still have some more work to do,” he said. “I've just got to sharpen my tools every day.”

The Jaguars eventually grew tired of Fowler's off-field problems, trading him to the Los Angeles Rams midway through the 2018 season for third- and fifth-round picks.

Joining a defense led by Aaron Donald, Fowler finally seemed to find his way. He started 14 games last season, recorded 11 1/2 sacks and returned a fumble for a touchdown.

“They knew all the good things I could do,” Fowler said. “They put me in the right situations to be an elite football player. I wasn't stubborn. Whatever I could do to get the sack and make the team better, that's what I did. I really appreciate what they did for me. They allowed me to blossom and let this league see what kind of player I can be.”

Just as important — maybe even more so — was learning how to conduct himself off the field.

“I was around a lot of great guys,” Fowler said. “I saw how they carried himself as pros.”

“You've just got to make the most out of your opportunities,” Fowler said. “Don't take what you have for granted. That's something I did in Jacksonville. I had to learn from that. It took a long time, but I finally got a second chance. I never looked back. I just took it and ran with it.”