Gettleman goes on offense over Odell Beckham deal and Eli 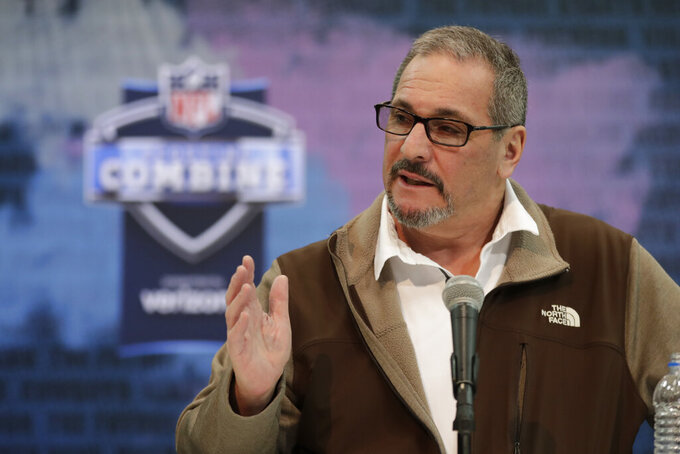 FILE - In this Feb. 27, 2019, file photo, New York Giants general manager Dave Gettleman speaks during a press conference at the NFL football scouting combine in Indianapolis. After a week of being beat up in the media over the trade of the popular star receiver Odell Beckham Jr., general manager Dave Gettleman went on the offensive, Monday, March 18, 2019, saying the trade was the best interests of the New York Giants and was a deal the organization could not refuse. (AP Photo/Michael Conroy, File)

EAST RUTHERFORD, N.J. (AP) — After a week of being beaten up in the media over the trade of popular star receiver Odell Beckham Jr., general manager Dave Gettleman went on the offensive, saying the trade was in the best interests of the New York Giants and was a deal the organization could not refuse.

Gettleman didn't stop there Monday, speaking for the first time since sending Beckham to the Cleveland Browns last week in return for first- and third-round draft picks this year and safety Jabrill Peppers.

The executive also defended quarterback Eli Manning, saying the belief the 38-year-old two-time Super Bowl MVP can't play well anymore is a "crock." He laughed off the idea that the trade for 29-year-old guard Kevin Zeitler and the free agent signing of 34-year-old safety Antoine Bethea gave the Giants a couple of old players, saying both are good players and good people.

When pushed about what is his plan for the Giants after winning three games in 2017 and five last season, Gettleman basically told reporters it was none of their business. He said the team is building, it has a master plan that would become apparent over time, and he would be judged by how it worked out over the next few years.

In discussing Beckham, Gettleman said he only approached the Bills about a deal for the 26-year-old wideout — partly because he heard Buffalo might be getting receiver Antonio Brown from Pittsburgh, and the other part was his friendship with Bills general manager Brandon Beane, who worked for him in Carolina.

Gettleman did not shop the three-time Pro Bowler because he felt doing that would not give him the upper hand in trade talks. He said the San Francisco 49ers called and the teams had numerous conversations without reaching a deal.

Once Browns general manager John Dorsey called on Tuesday, it took 10 hours to work out the deal. It was finalized over the weekend when Beckham and Peppers passed physicals, Gettleman said.

The obvious question is why get rid of the guy who has been the record-setting catalyst of the Giants' offense since being the No. 12 pick overall in 2014 and the Offensive Rookie of the Year that season.

"That's the question everybody asks," Gettleman said. "After much discussion we believe this was in the best interests of the New York Football Giants. I want everyone to know this was purely a football business decision. There is no intrigue. No he said, she said. None of that stuff."

Gettleman called Beckham a tremendous talent, but said the Giants got three assets in return, at the very least.

"Because of Odell's talent and personality, this was a decision we did not enter into lightly," said Gettleman, who has run the Giants since Jerry Reese was fired in December 2017. "There were a number of factors to take into consideration and I can assure you we thoroughly discussed them all."

The 68-year-old GM said he knows the Giants did not sign Beckham last summer to a $90 million deal to trade him, but things changed when the Browns made a value-packed offer that "knocked it out of the park" and allowed New York to address multiple positions on a team coming off a 5-11 record.

Gettleman says the litmus tests for trading a star player is the value of what a team would get if it lost a player who had a franchise tag: two first-round picks. He says the Giants got that in Peppers plus the No. 17 overall pick and a third-rounder. He added that time will tell whether the Giants made a good deal.

The recent personnel moves have put the Giants under a microscope, especially because the team has made the playoffs once (2016) since winning the Super Bowl in February 2012.

After the past season, New York did not franchise-tag leading tackler Landon Collins — Gettleman said teams called at the trading deadline last year to ask about acquiring Collins, but no one offered enough; traded sacks leader Olivier Vernon to Cleveland for Zeitler; made the Beckham deal; and stuck with Manning, who got a $5 million roster bonus this week.

"This narrative that Eli is overpaid and can't play is a crock, I'm telling you," Gettleman said, adding he doesn't mind if people disagree with him.

Gettleman said it was not his responsibility to discuss the Giants' plan for the future.

"Trust me, we have a plan," he said. "Over time, you have to be patient. Everybody wants the answers now. It's an instant gratification society. ... Over time, you will see it. You have to trust it."