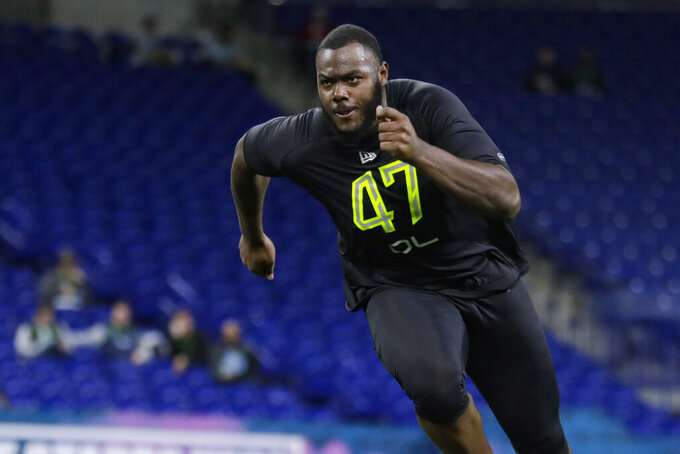 FILE - In this Feb. 28, 2020, file photo, Georgia offensive lineman Andrew Thomas runs a drill at the NFL football scouting combine in Indianapolis. The Giants drafted tackle Andrew Thomas of Georgia with the fourth pick overall in the recent draft. He probably will replace Nate Solder, who opted out of the 2020 NFL season because of the coronavirus pandemic. (AP Photo/Michael Conroy, File)

EAST RUTHERFORD, N.J. (AP) — New York Giants left tackle Nate Solder has opted out of the 2020 NFL season because of the coronavirus pandemic.

Solder, who started every game for the Giants the past two seasons, announced his decision on Twitter on Wednesday, citing his son’s ongoing fight with cancer, the recent birth of a baby boy and his own history with cancer.

The decision is expected to give the Giants $16.5 million in salary cap space.

“Our family has health concerns, most notably our son’s ongoing battle with cancer, as well as my own bout with cancer," Solder wrote. "We also welcomed a new addition to our family this spring, a baby boy. With fear and trembling, we struggle to keep our priorities in order and, for us, our children’s health and the health of our neighbors comes before football.”

The Giants drafted tackle Andrew Thomas of Georgia with the fourth pick overall in the recent draft. He probably will replace Solder at left tackle. Veteran Cam Fleming, who was signed as a free agent in the offseason, and Nick Gates, who is entering his third season, probably will complete for the right tackle spot.

The Giants were supportive of Solder’s decision.

“When he called today, I told him it is faith, family and football. He is doing what’s best for his family,” general manager Dave Gettleman said.

“We were together in New England, obviously, and he has always been a thoughtful, conscientious person," Judge said. “Ultimately, he made this decision because it is the right thing for him and his family.”

Solder's son, Hudson, was diagnosed with a rare kidney cancer at three months old. During the Giants’ bye week last season, the now 5-year-old had surgery to have a tumor removed before beginning his third round of chemotherapy.

Solder was diagnosed with testicular cancer before the 2014 season. He was treated and started all 19 games in helping the Patriots win the Super Bowl.