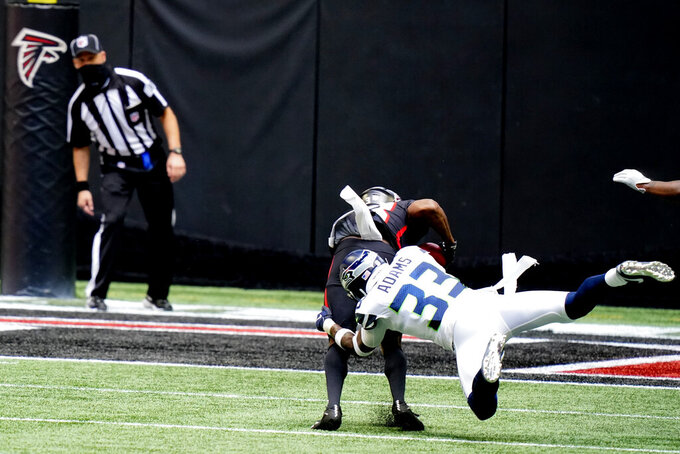 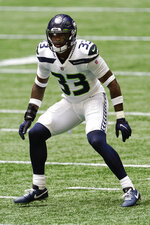 RENTON, Wash. (AP) — For all the excitement about Russell Wilson’s season-opening performance, there was an even better debut for the Seahawks.

Whether it was in the opposing backfield or roaming the secondary, the Seahawks' new defensive weapon was all over the field in a 38-25 opening win over Atlanta.

If first impressions are important, the one left by Adams only raised the optimism of how good Seattle’s defense might end up being with the addition of an All-Pro safety.

Adams finished with 12 tackles, two tackles for loss and a sack. Even those numbers don’t fully define his influence on Seattle’s defense, at least for Week 1.

Because of Adams versatility, Seattle’s defense was as aggressive as it has been at any time since the heyday of the Legion of Boom secondary. Adams wasn't alone in causing chaos with several parts of Seattle's defensive backfield blitzing at times.

The final numbers don’t look good as Seattle gave up 450 yards passing to Matt Ryan. But many of those yards came late in the game with Seattle holding a big lead and essentially were meaningless yards.

Seahawks fans have clamored for letting Wilson have more control of the offense with his arm and at least in the opener got their wish. Wilson was fantastic. Of his four incompletions, two were drops. Seattle threw on 21 of its first 35 plays and gained 210 total yards and scored 21 points.

Wilson finished 31 of 35 for 322 yards. He connected with nine different receivers and averaged 9.2 yards per pass attempt. If this continues, it might be the year Wilson gets an MVP vote.

It might be a little strange to say considering it’s Seattle, but the run game left something to be desired in the opener. Granted, the Seahawks ran the ball only 20 times, but even with the lack of carries the production was underwhelming.

Carson has long claimed he’s got pretty good hands and it showed against the Falcons. Carson had six catches for 45 yards and both of his touchdowns came through the air, including one of the best screen passes Seattle has run in coach Pete Carroll’s tenure.

It was the third time in his career Carson caught six passes in a game.

Wide receiver Phillip Dorsett was inactive Sunday and it’s unclear when he might get on the field. Dorsett was signed in the offseason to be the No. 3 receiver in Seattle’s system and bring another level of speed to the pass-catching group. But he was limited during training camp due to a sore foot that Carroll said has been a long-term issue the team was unaware about when Dorsett signed.

In his absence, Moore had 33 snaps on Sunday and rookie Freddie Swain had another 16. And there’s little certainty Dorsett will be available to play this week against New England, his former team.

8-0 — Continuing one of the oddest stats in football, the Seahawks improved to 8-0 in regular season games under Carroll in which the opposing quarterback throws for more than 400 yards. Matt Ryan passed for 450, although most of that came with the Falcons trailing significantly in the second half. Expanded further, Seattle is 10-1 when allowing opposing QBs to throw for more than 350 yards.

The last time the Seahawks won on the road in Week 1 was 2013, the year they won the Super Bowl. A win this Sunday over New England would give the Seahawks 2-0 starts in consecutive seasons for the first time since 2003 and '04.