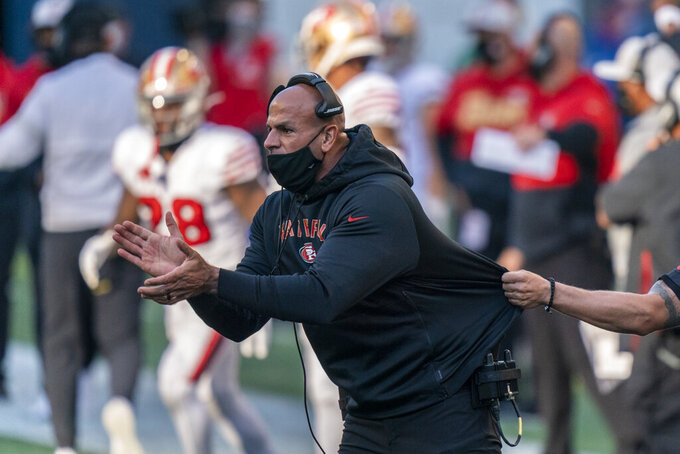 Saleh is one of the most popular candidates among the six teams looking for a new coach. In addition to his interview with New York on Friday, Saleh has also spoken to Detroit and Atlanta.

The 41-year-old 49ers assistant is the third known candidate to have a remote meeting with the Jets. They interviewed Kansas City offensive coordinator Eric Bieniemy on Wednesday and former Cincinnati coach Marvin Lewis on Thursday. New York has requested several more interviews in what is expected to be a lengthy and comprehensive process.

The Jets fired Adam Gase last Sunday after he went 9-23 in two years, including 2-14 this season.

Saleh has been the 49ers' defensive coordinator under Kyle Shanahan since 2017, overseeing San Francisco's defense that ranked No. 2 overall on the way to the Super Bowl last season. The 49ers were fifth this season despite season-ending injuries to pass rushers Nick Bosa — the 2019 AP NFL Defensive Rookie of the Year — and Dee Ford, as well as defensive linemen Solomon Thomas and Ezekiel Ansah.

Saleh began his coaching career in 2002 as a defensive assistant at Michigan State for two seasons, followed by stints at Central Michigan and Georgia. He joined the Houston Texans in 2005 as a defensive intern under Dom Capers and worked three seasons as a defensive quality control coach under Gary Kubiak before being promoted to assistant linebackers coach in 2009.

Saleh joined Pete Carroll's staff in Seattle as a defensive quality control coach in 2011 before being hired by Gus Bradley in 2014 as Jacksonville's linebackers coach.