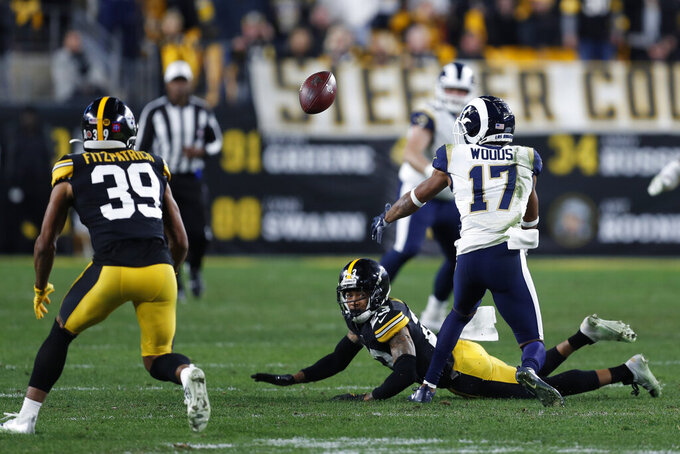 THOUSAND OAKS, Calif. (AP) — Although Robert Woods and Brandin Cooks are both grateful to be back at work with the Los Angeles Rams, their team is even more grateful to see its top two veteran receivers back on the practice field.

Woods and Cooks practiced with their teammates Thursday, and they both intend to play Monday night against the Baltimore Ravens. Both wideouts had extended recent absences from the team.

Cooks was getting medical help with his second concussion of the season. He has missed Los Angeles’ past two games after getting hurt in London.

“To be able to come back out here with the guys and prep for another game, I don’t take that for granted, that’s for sure,” Cooks said.

Woods was dealing with an undisclosed personal matter that unexpectedly forced him to miss the Rams’ win over Chicago last Sunday. He had been away from the team since last weekend.

“Just appreciate the Rams organization allowing me to deal with my family matters, allowing me to keep this personal,” said Woods, who didn’t go into detail on his situation.

Woods said he is “planning on” playing Monday, but is “just taking it day by day.”

Jared Goff and coach Sean McVay are hopeful they will have their full complement of receivers available to face the powerful Ravens (8-2) in a key game for the Rams’ (6-4) NFC playoff hopes.

Cooper Kupp is the Rams’ top receiver this season with 61 catches for 845 yards, while No. 4 receiver Josh Reynolds has filled in capably for both absent veterans. But the Rams aren’t the same team without Woods, the precise possession receiver with 45 catches for 566 yards this season, and Cooks, Los Angeles’ top deep threat.

When the Rams beat the Bears last weekend, they did it with just 18 pass attempts by Goff while Woods and Cooks were both sidelined.

Los Angeles’ running game carried the offensive weight, but McVay can’t implement his full offense without several reliable receivers along with tight ends Gerald Everett and Tyler Higbee. Instead, McVay frequently used his tight ends to help out an offensive line with three inexperienced starters thanks to recent injuries, and the strategy worked well enough to win.

Cooks has a history of concussions, with at least five recorded instances during his six-year NFL career. He made two trips to Pittsburgh during his absence from the Rams to meet with specialists who advised him on his brain health, and what he can do to preserve it.

Cooks also incurred a concussion at Seattle three weeks before his injury in London, yet he says that having two concussions without a month is “not really concerning at all.” He is getting a different helmet, however.

“I understand that it’s one of the things that’s part of the game,” Cooks said. “At the end of the day, what’s going through my mind is like, ‘OK, let’s get some answers,’ and then figuring out what’s going on. It’s a blessing that I don’t have ever have symptoms after.”

McVay said Cooks has been eager to return to action for two weeks since his return from the Rams’ bye week. Cooks’ speed allows McVay to open up his vertical passing game, which also spreads out defenses for the other skill players in his offense.

Cooks said he hasn’t considered retirement, and the prospect of quitting football wasn’t brought up by his doctors. Cooks is in the first season of a five-year, $81 million contract with $20.5 million guaranteed, a deal that the Rams gave to him last year before he had even played for his new team.

Despite a history that includes a concussion during the Super Bowl when he played for New England two seasons ago, Cooks doesn’t feel more vulnerable as he returns for the final six games of the Rams’ regular season.

“It’s just like any muscle,” Cooks said of his brain health. “The more that you train it, the stronger that it can become. Other than that, I just think it’s an anomaly.”

NOTES: RB Malcolm Brown missed practice while awaiting the birth of his child. ... With an extra day between games thanks to their Monday night date, the Rams are taking Friday off. ... Reynolds and P Johnny Hekker missed practice due to illness.