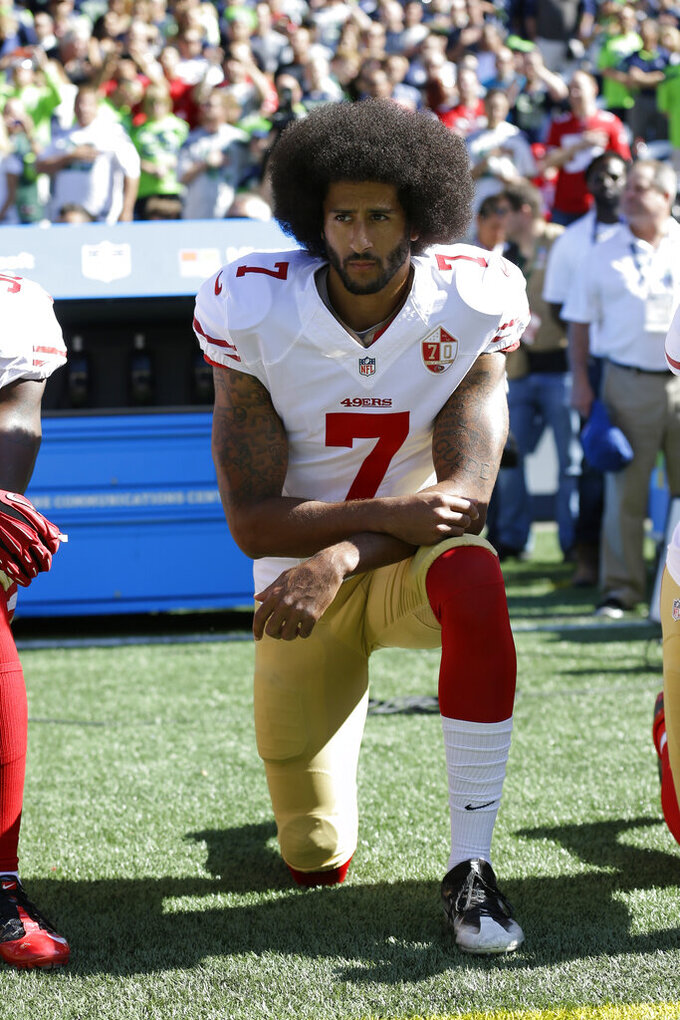 FILE - In this Sept. 25, 2016, file photo, San Francisco 49ers' Colin Kaepernick kneels during the national anthem before an NFL football game against the Seattle Seahawks in Seattle. The NFL, which has raised $44 million in donations through its Inspire Change program, announced the additional $206 million commitment Thursday, June 11, 2020. Kaepernick and others began kneeling during the national anthem in 2016 to protest social injustice and police brutality. He has not found an NFL job the last three seasons. (AP Photo/Ted S. Warren, File)

The NFL is committing $250 million over 10 years to social justice initiatives, targeting what it calls “systemic racism” and supporting “the battle against the ongoing and historic injustices faced by African Americans.”

The league, which has raised $44 million in donations through its Inspire Change program, announced the additional $206 million commitment Thursday. It plans to “work collaboratively with NFL players to support programs to address criminal justice reform, police reforms, and economic and educational advancement.”

Less than a week ago, Commissioner Roger Goodell denounced racism in a video prompted greatly by a players' video seeking NFL action.

"I am listening, and I will be reaching out to players who have raised their voices and others on how we can improve and go forward for a better and more united NFL family,” he said.

The players want to see definitive action, of course. There has been increasing distrust of the NFL since San Francisco quarterback Colin Kaepernick and others began kneeling during the national anthem in 2016 to protest social injustice and police brutality. The message was misconstrued by the league and many team owners as anti-military and anti-flag. Goodell admitted as much in his video, though never mentioning Kaepernick, who has not found an NFL job the last three seasons.

“They’ve tried their best to throw money behind it for a long time," he said. “It takes more than that. It takes you literally calling out bigotry and being motivated. It’s not just pleading. It’s being consistent year in and year out that you’re combating this issue and that this is a problem that needs to change. And it’s not just this year, not just 2016, not just 2017, but ‘Black Lives Matter.’ They have to matter forever.”

The Players Coalition was established in 2017 to work for social justice, growing out of the Kaepernick-inspired protests and pledging to improve police/community relations, champion criminal justice reform, and promote education and economic advancement in communities across the nation.

Earlier this week, the coalition collected more than 1,400 signatures from active and retired athletes, coaches and executives from a variety of sports and presented them to Congress this week in support of a bill seeking to eliminate qualified immunity regarding police brutality. That bill was introduced in response to the deaths of George Floyd and Breonna Taylor while in police custody.

Saints safety Malcolm Jenkins, a co-founder of the Players Coalition, spoke on CBS about the movement to defund police:

"It doesn’t mean we eradicate police completely. We’ve got 10 million kids going to schools with police officers in them and no social workers. Three million that have got police in their schools and no nurses. Six million with police in their schools but no psychologists. Yet we want to invest in putting more police on the streets and over-policing that we know does not make our communities safer.

Some of the programs the NFL is targeting will deal with those issues, according to Anna Isaacson, the league's senior vice president of social responsibility.

“What this really is is a deeper and expanded commitment form the league and owners to say we are in this for the long haul,” she said. “It's probably a deeper clarification on what we are meaning and focusing on. It has always been there, that focus, but obviously with current events and even before the last two weeks, conversations with the players have been on really focusing on this. Recent events solidified this has to be a key focus for us.”

Isaacson mentions Big Brothers and Big Sisters, and Metro Peace Academy in Chicago as two organizations the league works with.

“With Big Brothers and Big Sisters, we fund a program to bridge the gap in communication and understanding,” he said. "The program is pairing law enforcement officers with specific under-served youth, and those one-on-one relationships are to both the `Big’ and the `Little,′ as they call them, meant as a way to bridge whatever gaps exist. Building one-on-one relationships where trust is built and knowledge gained is essential.

"There are many such programs across the country that have started this work and are doing incredible work on the ground. We are looking for programs with a proven model and good track record and that has boots on the ground and treating people directly. National in scale, but that is truly the grass roots.

“We’re making sure a lot of our grants are reaching down into the communities they serve, people to people and person to person.”