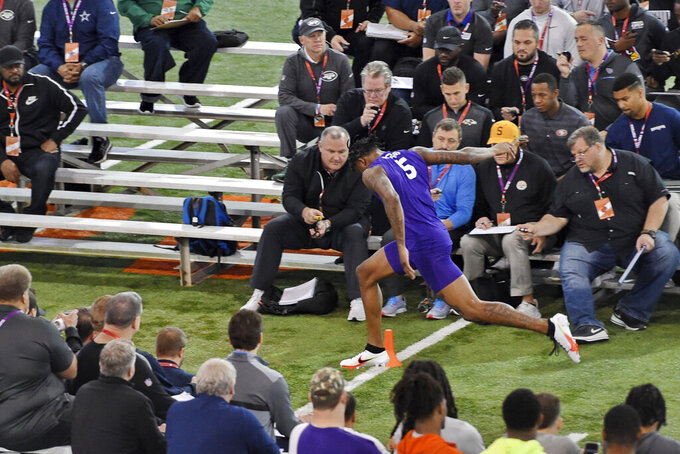 NFL teams are curtailing or completely stopping scouting operations as a safeguard against the spread of the new coronavirus.

The Washington Redskins, Minnesota Vikings, Miami Dolphins, Tampa Bay Buccaneers, Tennessee Titans, Pittsburgh Steelers and New York Jets are among those that have ordered their scouts and assistant coaches to return home in what typically is a busy time for evaluating college players. The NFL draft is scheduled for April 23-25 in Las Vegas.

Many teams have told employees to work remotely.

“Due to health and travel concerns surrounding COVID-19, we have informed all of our scouts and coaches that they must return to their home bases and travel will be suspended until further notice," Redskins owner Daniel Snyder said in a statement Thursday. "The health and safety of our staff and players is our number one priority and we feel that these are the necessary precautions given the current circumstances.”

Soon after, the Vikings announced a similar decision.

“... We are also suspending travel for our coaches and scouts until further notice and reviewing restrictions on large public gatherings in the near future," a team statement said. "These are uncertain times, and our priority is to protect the health and safety of our players, coaches, staff and fans and do our part to minimize the spread of this virus.”

The Super Bowl champion Kansas City Chiefs have instructed all nonessential team personnel to work remotely for a minimum of 14 days beginning Monday. They also have suspended business travel and all nonessential travel for coaches and scouts.

The Carolina Panthers also told employees, with a few exceptions, to begin working from home. They also limited travel for coaches and scouts until further notice.

The Green Bay Packers will close its businesses to the public for two weeks beginning Friday. That applies to all Lambeau Field businesses — the Packers Pro Shop, Packers Hall of Fame and 1919 Kitchen & Tap — and team-run public activities in Titletown.

"Our priority is the health and safety of our staff and visitors," Packers President and CEO Mark Murphy said in a statement. “This is a decision we made with all due consideration, and we feel it is an important step to take in helping mitigate the spread of the virus.”

For most people, the new coronavirus causes only mild or moderate symptoms, such as fever and cough. For some, especially older adults and people with existing health problems, it can cause more severe illness, including pneumonia. The vast majority of people recover from the virus.

According to the World Health Organization, people with mild illness recover in about two weeks, while those with more severe illness may take three to six weeks to recover.

The University of Michigan, Penn State, Vanderbilt and Texas A&M are among schools that called off or suspended pro days on Thursday. Other schools still plan to hold theirs — or make decisions pending developments.

NFL teams also are either limiting or eliminating facility visits by draft prospects. So are player agents.

“As an agent, it's my strong recommendation that my players don't travel for any team visits,” Mike McCartney tweeted. “With 12 or more games played, an All-Star game and Combine for most, teams have enough information to make an informed draft decision.”

NFL teams can bring in to their facilities for visits up to 30 players heading to the draft, though there are some exceptions for players from local schools.

The San Francisco 49ers are closing operations at Levi's Stadium and at their training facility until further notice. Public and private team events have also been canceled.

The Atlanta Falcons will close their training facility in Flowery Branch, Georgia, on Monday “for an intense cleaning throughout the entire facility. Staff will be working remotely,” the team said.

Also Thursday, Commissioner Roger Goodell said the league's main annual meetings have been canceled. They were scheduled for March 29-April 1 in Palm Beach, Florida, and were to include owners voting on potential rules changes.

Instead, those major decisions will be made at the May 19-20 spring meetings in Marina del Rey, California.

But the NFL's business season will begin next Wednesday — as of now. That means the start of free agency and official trading. Of course, visits by free agents to team facilities figure to be limited if not nonexistent.

There's also the matter of players' union members voting on a new labor agreement that the owners approved last month. Some 2,500 members of the NFL Players Association face a deadline of 11:59 p.m. EDT on Saturday.

There has been little talk of postponing or canceling the draft, though staging it in Las Vegas seems a long shot. The NFL says it is monitoring the situation. Holding the draft without fans as a televised event in a studio or conference hall could be an option.