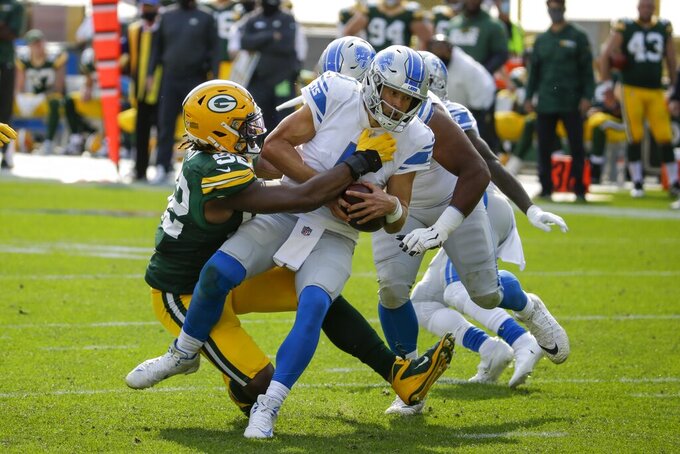 As long as the Green Bay Packers keep scoring 40-plus points every game, their defense can afford the occasional lapses that have marked their first two performances.

But the reality of the situation is that Green Bay’s defense must improve because its offense can’t maintain this electrifying pace all season.

“We can’t have any up-and-down moments, any roller coaster moments where we start off good and then we have our dips and then come back up,” outside linebacker Preston Smith said. “We’ve got to kind of reach our peak, stay there and keep on rising.”

It’s easy to pinpoint those dips.

Green Bay gave up touchdowns on the last three possessions of a 43-34 victory at Minnesota and the first two drives of a 42-21 victory over Detroit.

They must play better to win Sunday at New Orleans (1-1), whether or not the Saints have Michael Thomas available. The two-time All-Pro receiver missed the Saints' 34-24 loss at Las Vegas with an ankle injury and didn't practice Thursday.

Although the Saints’ offense has struggled a bit thus far, their track record suggests that won’t continue.

“I think just schematically you just look back at over the course of these years, you know, they’re a team that everybody in the league watches because their staff does such a great job of getting just explosive plays and are able to generate points year in and year out,” Packers coach Matt LaFleur said.

The Packers have allowed 344.5 yards per game and are 10th out of 32 NFL teams in total defense, but that's due in part to an offense that has controlled possession for more than 38 minutes per game to lead the league. Green Bay has given up 6.4 yards per play to rank 27th.

This defense still has plenty of reason for optimism.

New first-team nickel back Chandon Sullivan showed his promise by scoring on a 7-yard interception return against Detroit. Rashan Gary has bounced back from a disappointing rookie season and emerged as a pass-rushing force to complement Za’Darius Smith and Preston Smith. Za’Darius Smith has a sack in each of the Packers’ first two games.

“It’s a physical front inside when you’ve got a veteran like Kenny Clark at nose who’s a strong player, Za’Darius Smith who can wreak havoc in your passing game and your running game,” Saints coach Sean Payton said. “Not to mention the other guys that are playing inside. It’s also a good group on the back end. The corners are outstanding players, as are the safeties.”

Clark's status is uncertain after he missed the Lions game with a groin injury, though he did practice on a limited basis Thursday.

The return of Clark could help Green Bay’s defense stop its recent penchant for slow starts. Green Bay has allowed a touchdown on the opponent's opening series each of the first two weeks.

Defensive coordinator Mike Pettine said the defense made six or seven mental errors against Detroit, and that five of them happened in the first quarter. Safety Darnell Savage Jr. wonders if the lack of fans might impact how Green Bay’s defense has started games.

“You in a way have to bring your own kind of energy,” Savage said. “But sometimes you can bring too much. So we’ve just got to find that balance, and we normally find it around the third drive or so. Hopefully this week we can start off strong and end strong.”

Once that happens, Green Bay’s defense will start playing better than it has in the past couple of weeks.

“The bottom line for us is it was well enough to win, but it has not been to our standards,” Pettine said. “Obviously it’s great when we can make big plays and score points, but we have to raise our level of consistency. Our offense is not going to be able to control the ball for 38 minutes a game all year.”