Pagano puts stamp on Bears 'D' after year out of coaching 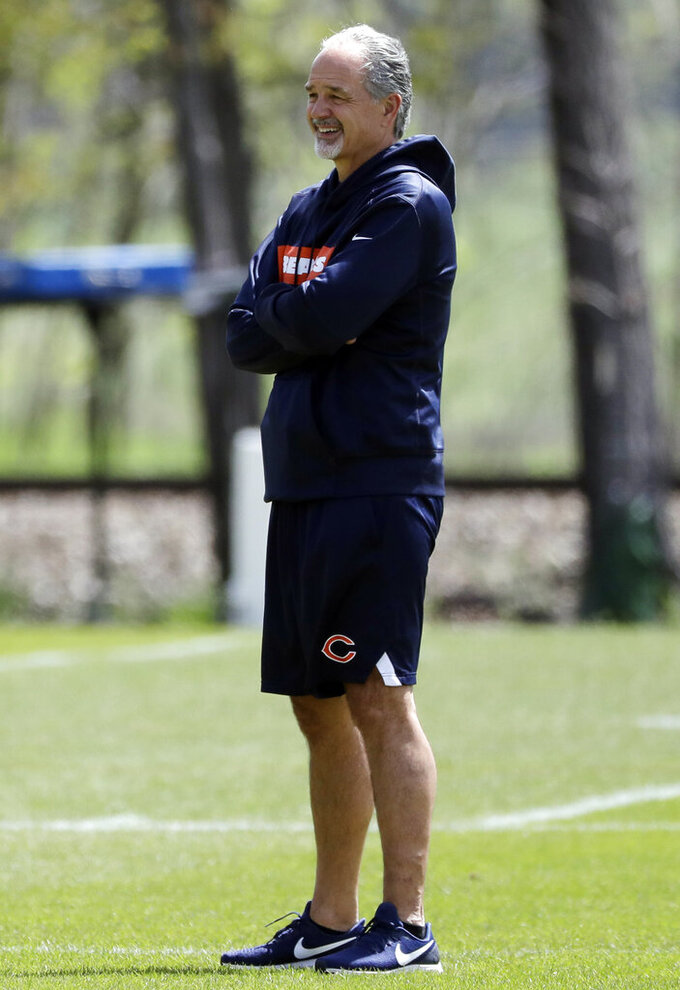 LAKE FOREST, Ill. (AP) — Chuck Pagano made the most of his time away from the sideline. He's also glad to be coaching again.

The Chicago Bears' new defensive coordinator gets to put his stamp on a unit that emerged as one of the best the past four seasons under Vic Fangio, particularly now that offseason workouts are underway.

"You ask any player that's been let go or put on the street and then been given another opportunity, another team, another locker room, coaches to be around, players to be around, come out here and run around like a kid again — there's nothing better," Pagano said Wednesday.

The Bears have soaring expectations and a bit of a chip on their shoulder after a bitter loss to end a breakthrough year.

The Bears are banking on improvement by an offense entering its second year in Nagy's system, and more dominance from a defense that returns mostly intact — with at least one notable change.

Overseeing it now is Pagano, hired in January after Fangio took the head coaching job in Denver.

He spent last year out of coaching, as an NFL consultant working with officials, after leading Indianapolis to a 53-43 record and two AFC South championships from 2012-2017.

Pagano got to go to the Masters, rode his Peloton bike and spent quality time with his family. He made the most of his situation. But he wasn't where he really wanted to be: coaching.

With offseason workouts in process, he feels recharged and ready to embrace the challenge. On the one hand, he inherits a loaded defense. On the other, his predecessor set a high standard.

"He knows what kind of challenge that is, because there's expectations not just from the media and from the fan base but from his own players," Nagy said. "They know what they did under Vic's regime and his coaching staff. So I think that's going to be really neat to watch organically happen, but there's got to be some patience involved there, so that's what we'll continue to talk through."

Pagano inherits a group led by All-Pros Khalil Mack, Kyle Fuller and Eddie Jackson that ranked third in total defense. The Bears had more takeaways (36) and interceptions (27) than any other team. They allowed a league-low 17.7 points per game and 1,280 yards rushing — the fewest by a Chicago team in a 16-game season. And they tied for third in the league with 50 sacks even though they didn't blitz much.

"We all know how well this defense did," Pagano said. "They love football. They love playing football. We've had great attendance, great participation. They love each other. They just love playing the game. It's been a real pleasure. We've got a long way to go, obviously. But they're doing a great job."

One thing that has stood out to defensive end Akiem Hicks is Pagano's ability to relate to his players.

"He just understands what they could be thinking, what the possibilities are," Hicks said. "And he can attack those before an issue arises. And he can stop an issue from arising."

Linebacker Roquan Smith said he has the "utmost respect" for Pagano and Fangio.

"Definitely, Chuck's a little more outgoing," Smith added. "He is who he is. We respect that, love it and embrace it each and every day."

When it comes to scheme, Pagano and Fangio are similar. They both run a 3-4. And they overlapped as assistants in Baltimore, helping mold a defense that ultimately led the Ravens to a Super Bowl championship at the end of the 2012 season.

Pagano said he would be "foolish" not to retain some of Fangio's plays. But he's also putting his mark on the defense.

He said his staff has been "throwing a lot of mud at the wall and seeing what sticks." What he's seeing so far is a high retention rate.

NOTE: Two players have changed positions, with Bradley Sowell moving from offensive tackle to tight end, and Taquan Mizzell from running back to receiver.