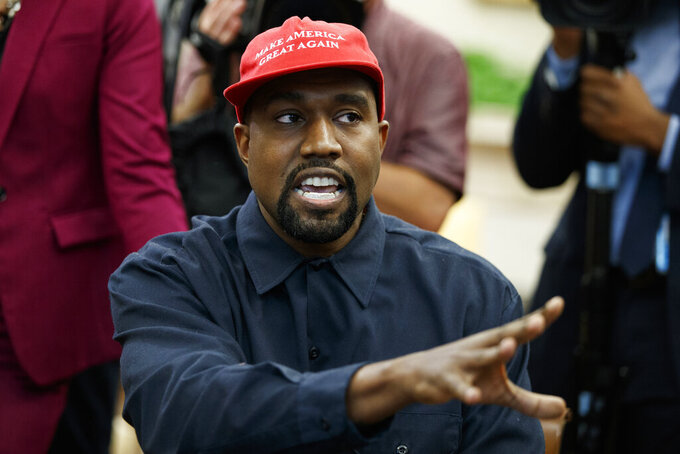 FILE - Rapper Kanye West speaks during a meeting in the Oval Office of the White House with President Donald Trump, Thursday, Oct. 11, 2018, in Washington. Kanye West was escorted out of the California headquarters of athletic shoemaker Skechers Wednesday, Oct. 26, 2022 after he showed up unannounced. Skechers says West, also known as Ye, also engaged in unauthorized filming at its corporate headquarters in Manhattan Beach and was escorted out by two executives. (AP Photo/Evan Vucci, File)

New England Patriots owner Robert Kraft and other members of the sports world are condemning recent incidents of hate speech toward Jewish people — not just the antisemitic comments by the music mogul formerly known as Kanye West, but also outside of a college football game in Florida on Saturday night.

A day after the NBA and Brooklyn Nets issued disapproving statements in response to Kyrie Irving's apparent support for an antisemitic film, other team executives and athletes are speaking out against hatred and intolerance, on and off the field.

At some point during the football game between Florida and Georgia on Saturday night, the phrase “Kanye is right about the jews” was projected on the outside of one of the end zones at the TIAA Bank Field stadium in Jacksonville, Florida. It was a reference to recent antisemitic comments that Ye has made on social media and in interviews — comments that have led to him losing partnerships with Adidas and several other companies.

The University of Florida and University of Georgia issued a joint statement Sunday morning condemning the hate speech on the stadium and “the other anti-Semitic messages that have appeared in Jacksonville.” The schools also said they “together denounce these and all acts of anti-Semitism and other forms of hatred and intolerance. We are proud to be home to strong and thriving Jewish communities at UGA and UF, and we stand together against hate.”

Jacksonville Mayor Lenny Curry said on social media his northeast Florida city is “made better because of its diversity. Those who spread messages of hate, racism and antisemitism will not be able to change the heart of this city or her people. I condemn these cowards and their cowardly messages.”

And Shad Khan, the owner of the Jacksonville Jaguars, who play in the TIAA Bank Field stadium, said on social media that he was “personally dismayed” by the rhetoric, calling it, “hurtful and wrong.”

“It has to stop. I'm asking everyone to make it their mission to end the ignorance and hate,” Khan said. “Let's be better.”

Last year, the Anti-Defamation League recorded 2,717 incidents of harassment, vandalism or violence targeting Jews — the highest annual total since it began tracking these incidents in 1979. The recent antisemitic incidents come four years after the deadliest attack on American Jews, when 11 people were killed at a synagogue in Pittsburgh, and just days before the contentious midterm elections throughout the U.S.

A nonprofit founded by Kraft took the extra step of planning to air an ad during the Patriots-New York Jets game on Sunday that condemned anti-Jewish hate speech and encouraged people who are not Jewish to speak up against antisemitism.

“Recently many of you have spoken up,” the 30-second ad from Kraft's Foundation to Combat Antisemitism said. "We hear you today. We must hear you tomorrow. There are less than 8 million Jewish people in this country. Fewer than are watching this ad. They need you to add your voice."

The ad, which was scheduled to air during the first quarter of the game, ends with the hashtag: #StandUptoJewishHate.

"I have committed tremendous resources toward this effort and am vowing to do more," Kraft said in a statement. "I encourage others to join in these efforts. My hope is this commercial will continue to enhance the national conversation about the need to speak out against hatred of all types, and particularly to stand up to Jewish hate.”

Also this week, Nets owner Joe Tsai said he was disappointed by Irving, a seven-time All-Star who appeared to support a film Tsai said was “based on a book full of antisemitic disinformation” when he posted a link for the film “Hebrews to Negroes: Wake Up Black America” on Twitter on Thursday.

Nets coach Steve Nash said the organization had “spoken to Kyrie about it” but didn't give specifics. The NBA also spoke up Saturday, saying that “hate speech of any kind is unacceptable.”

“We believe we all have a role to play in ensuring such words or ideas, including antisemitic ones, are challenged and refuted and we will continue working with all members of the NBA community to ensure that everyone understands the impact of their words and actions,” the league said.

Irving, however, responded in a postgame news conference Saturday, claiming to believe in all religions and saying he is “not a divisive person when it comes to religion." He added he wouldn't “stand down on anything I believe in.”

“Did I do anything illegal? Did I hurt anybody?” Irving said. “Did I harm anybody? Am I going out and saying that I hate one specific group of people?”

Texas A&M's football team changed up how it entered the field Saturday night before its 31-28 loss to No. 15 Mississippi. After coming out to “Power” by Ye since 2012, the Aggies instead entered to an instrumental of “Bonfire” by Childish Gambino. Texas A&M athletic director Ross Bjork criticized West's comments earlier this week.

The fallout around Ye's comments also includes Donda Sports, a brand management agency he founded. Los Angeles Rams defensive tackle Aaron Donald and Boston Celtics swingman Jaylen Brown terminated their associations with the agency, with Donald and his wife, Erica, denouncing the “displays of hate and antisemitism” by Ye.

The high-profile basketball team at Ye's Donda Academy in California also has been affected, with the Los Angeles Times reporting Friday that it had confirmed four major tournaments had dropped the school.