'Prime' time? TE Ebron eager to start over with Steelers 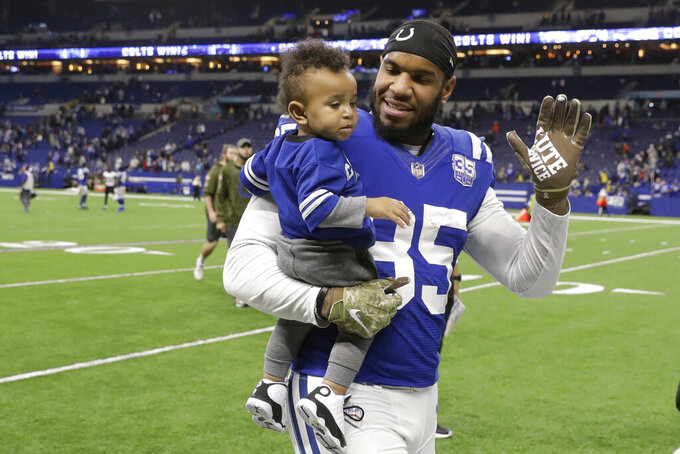 FILE - In this Nov. 11, 2018, file photo, Indianapolis Colts tight end Eric Ebron (85) carries his son as he leaves the field following an NFL football game against the Jacksonville Jaguars in Indianapolis. Ebron is embracing a fresh start in Pittsburgh after an ugly divorce with the Indianappolis Colts. The Steelers signed Ebron to a two-year contract last week. (AP Photo/Darron Cummings, File)

PITTSBURGH (AP) — Eric Ebron isn't worried about Ben Roethlisberger's surgically repaired right elbow. The same goes for Ebron's balky ankle, which the newly signed Pittsburgh Steelers tight end said had “a whole lot of mess” in it before getting cleaned up in December.

While Ebron acknowledged he wouldn't quite be ready to go if the season started this week, he quickly pointed out that it doesn't. And when it does — whenever that might be — he'll be ready.

“(Steelers coach) Mike Tomlin pretty much told me that he was going to put me in the best possible situation to succeed," Ebron said Thursday, about a week removed from signing a two-year deal with the team. "There’s no other thing you want as a player that’s coming into pretty much prime of my career. I’m 26 years old, no better situation to be than where they’re going to use you to the best of your ability.”

Ebron has frequently tantalized during his first six seasons. He served as a security blanket of sorts for Matthew Stafford in Detroit from 2014-17, then caught 13 touchdown passes — tied for second-most in the NFL — and made the Pro Bowl in 2018 while collaborating with Andrew Luck in Indianapolis. Luck's retirement near the end of the 2019 preseason, combined with ankle issues that wouldn't go away, saw Ebron's production drop precipitously last fall. He finished with 31 reception for 375 yards and three scores before shutting himself down in late November.

Ebron initially tweaked the ankle in early August and kept waiting for it to get better. It didn't. Following a loss to Houston on Nov. 21, Ebron felt he'd endured enough, even though the Colts indicated they felt otherwise.

“I said I couldn’t do it any longer, that was my choice,” Ebron said. "I went and told (Indianapolis) I was making that choice a week before I made that choice. It was well thought-out, well known-about. ... I was hurt. And nobody likes to play hurt.”

Ebron is embracing a fresh start in Pittsburgh. A chance encounter with Roethlisberger in January may have planted the seed. The two were at a conference when their paths crossed. They “chopped it up” for a bit, Ebron said, and he might have mentioned he was about to hit the open market.

“Maybe (Roethlisberger) pulled a string or two, who knows?” Ebron said with a laugh.

Ebron pointed to Pittsburgh's long history of success and Roethlisberger's Super Bowl-laden resume as the primary driving factors in his decision to sign. Like Ebron, the 38-year-old Roethlisberger is eyeing a reboot after his 2019 season was cut short after just six quarters due to a right elbow injury. Asked if he's worried about Roethlisberger returning to form, Ebron laughed.

“I think Ben has been through more injuries than anybody, and for him to tell us he’s throwing without pain ... if he says that, he means that because he has been pretty beat up,” Ebron said. “He’s played this game for a long time. If he feels good, then (he's good).”

Ebron and Roethlisberger have already started exchanging ideas over text, a relationship Ebron hopes will grow once they finally meet as teammates.

“I just really want to be, like, if I can be Big Ben’s best friend, kind of like I was to Andrew, be in his ear, his pocket,” Ebron said. “I just want to kind of see, understand his language, see things from his view, his focal point, how he reads defenses. Just ask him questions about anything right now. Get to know him and start early.”

Ebron is joining a tight end group that was largely ineffective in 2019 with Roethlisberger out. Vance McDonald averaged just 7.2 yards per catch and Nick Vannett — acquired in a trade with Seattle in late September — was an afterthought. If the 6-foot-4 Ebron can regain the red-zone prowess he showed with the Colts in 2018, it would take some of the pressure off wide receiver JuJu Smith-Schuster.

Though his deal with Pittsburgh is for two years, Ebron is hoping to make his stay a bit more permanent. He stressed he's “not a journeyman” and pointed to his long relationship with Steelers cornerback Joe Haden and his history with wide receiver Ryan Switzer (a college teammate at North Carolina) as proof he may finally be in a spot where he can settle down.

“I know it’s going to be the easiest transition I’ve ever had,” Ebron said, “because I pretty much know all the guys.”