Versatile Kareem Jackson sees time at safety and in slot 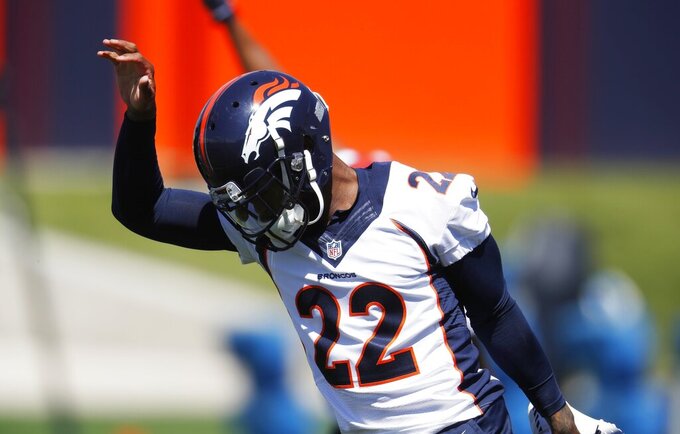 ENGLEWOOD, Colo. (AP) — Over the last few days, versatile Denver Broncos defensive back Kareem Jackson has lined up at safety and in the slot position.

Not much work at cornerback, though.

That could change depending on the team's contract talks with star cornerback Chris Harris Jr., who's skipping the organized team activities this week as he seeks a new deal.

"I'm in the middle of it?" Jackson good-naturedly asked Thursday. "I don't think I'm in the middle. Obviously, we definitely want Chris to be here. He's a big-time player in this league. He'll definitely help us on the defensive side. At the end of the day, it's a business. He wants to get paid, to have some type of stability so he can take care of himself and his family. "

Harris, a perennial Pro Bowl selection who turns 30 in June, is entering the final season of a team-friendly, five-year, $42.5 million contract he signed in 2015. He's the last remaining member of the team's notorious "No Fly Zone" secondary.

"If he'll be here, we'll definitely love for him to be here," Jackson said. "At the end of the day, we understand it's a business. Sometimes things happen that we all may not want to happen.

"As for the rest of the guys, we have to work accordingly."

For Jackson, that's absorbing multiple positions in a hurry. The task is nothing new for him as he played some cornerback and safety for the Houston Texans a season ago when he had two interceptions and 87 tackles.

Technically listed as a cornerback for Denver, he's spent most of his time this spring working with the safeties. He's also seen some reps at the slot position.

"At some point, I'm sure I'll get some reps at corner also," said the 31-year-old Jackson, who was a first-round pick by Houston in 2010. "I'm trying to prepare for all three spots."

His preference would be to play safety, because "I get a chance to see everything that's going on and just kind of run and hit people."

Still, he counts his true value as being able to line up wherever he is needed.

"That's one of my strengths, playing multiple positions," Jackson said. "I feel like that can help us as a defense on Sundays."

For advice, Jackson is leaning on Callahan, who played in Fangio's system when both were in Chicago.

"With him being in the system for quite some time, he's able to help all the guys," Jackson said of Callahan. "I know a couple times throughout the day when I've been playing slot and he's playing corner, I can look right to him and ask, 'Hey, what do I have right here?' He's been very helpful."

NOTES: Jackson attended his share of Denver Nuggets games during their playoff run. "I'm a huge NBA fan. I try to catch a couple games throughout the year," Jackson said. ... Asked about the change in rookie QB Drew Lock from their time together at Missouri, Broncos guard/center Connor McGovern responded: "That's a totally different player."