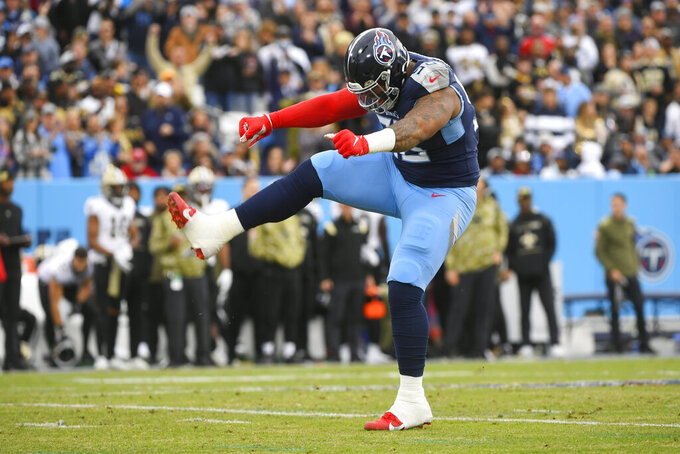 NASHVILLE, Tenn. (AP) — The Tennessee Titans are flying high, sitting atop the AFC and tied for the NFL's best record at 8-2. They've beaten five straight playoff teams from last season, something only one other team in league history has accomplished.

Now comes a different kind of challenging portion of their schedule starting Sunday against the Houston Texans (1-8) — losers of eight straight.

“You want to kind of kill their hopes early in the game,” Titans safety Kevin Byard said of their AFC South rivals.

The Titans (8-2) have won six straight for the NFL's longest active winning streak since they let a struggling team hang around long enough to start believing. The New York Jets got their first win this season at Tennessee's expense Oct. 3.

Tennessee coach Mike Vrabel has been preaching the need for urgency this week, intent on cleaning up issues that cropped up in last week's 23-21 win over New Orleans. His Titans are 10-point favorites against the Texans.

“I don’t know who draws the papers up, but these games in this league, these are grown men with a lot of pride,” Vrabel said. “If you take a play off, you can get hurt. Not only can you lose the game, but somebody can get hurt.”

The Texans are coming off their bye after a 17-9 loss at Miami extended their skid. First-year coach David Culley is a native of Sparta, Tennessee, who played at Vanderbilt and coached at four colleges inside Tennessee. With eight games left, he's trying to focus his team on what's left rather than what's happened.

“We’re not looking at it as a losing streak,” Culley said. "We’re looking at it right now as having a one-game winning streak and then moving forward.”

The Titans have had their two worst rushing performances since losing Derrick Henry to a broken right foot. Part of the challenge is building timing and chemistry between D'Onta Foreman and Adrian Peterson with a banged-up offensive line at a point of the season when practices have been mostly slow sessions.

They might be able to start fine-tuning their new running backs with the line against a Houston defense that is next to last in the NFL against the run. The Texans are giving up an average of 136.9 yards per game.

Tyrod Taylor had a subpar performance in his return from a six-game injury absence in Houston’s last game, tying a career high with three interceptions against Miami. Now that he’s had a game to shake off the rust from his long layoff, he and the Texans are confident he’ll play much better.

“I had the bye week to also work on some things and looking forward to getting back on the field this week and bouncing back personally, and also as a team,” Taylor said.

The 11-year veteran led the Texans to their only win in the season opener against Jacksonville. He was injured in the first half in Week 2 and didn’t play again until the Dolphins game.

“That game will obviously help him,” Culley said. “He’s always been a guy that doesn’t make the same mistakes twice.”

Protecting quarterbacks has been an issue for both Tennessee and Houston. Titans quarterback Ryan Tannehill currently is tied with Chicago's Justin Fields as the NFL's most-sacked quarterbacks with 29 apiece. Houston has allowed 26 sacks.

The Titans come in with a much-improved pass rush after ranking 30th with only 19 sacks last season. Only three teams currently have more than Tennessee's 27 sacks. Linebacker Harold Landry has a career-high 10, while defensive tackle Jeffery Simmons has five of his 7 1/2 sacks over the past two games.

“We’ve gone against Aaron Donald, and this guy right here is as good as Aaron Donald," Culley said of Simmons.

After ranking 31st in yards rushing last season with just 91.6 a game, the Texans again have the league's second-worst rushing attack. This time, the numbers are even worse. Houston is averaging a meager 75.8 yards rushing and traded away leading rusher Mark Ingram to the Saints on Oct. 27.

The Texans have a trio of veteran running backs in David Johnson, Phillip Lindsay and Rex Burkhead, but none has ran for more than 40 yards in a game this season. Despite the struggles, Culley remains confident the Texans can improve their stalled ground game.

The Titans, who still have 15 players on injured reserve and have used an NFL-high 82 players this season, are starting to heal. They have only 11 players — nine of whom have started this season — on this week's injury report. Linebacker Bud Dupree is dealing with an abdominal injury that knocked him out of the Saints game early.