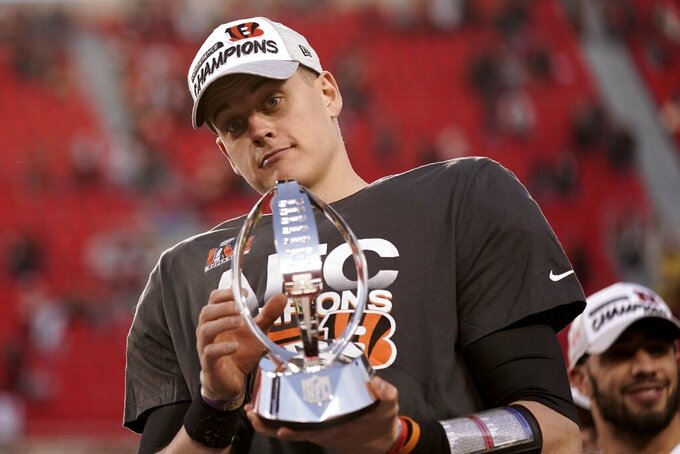 Matthew Stafford and Joe Burrow had almost nothing in common before Sunday except that they were top overall picks in the NFL draft.

Now, they are both Super Bowl quarterbacks.

Their journeys are almost polar opposites since each left an SEC powerhouse.

Stafford was the first selection in the 2009 draft out of Georgia and then spent a dozen years trying not to get pummeled in Detroit. Always considered a good player on a bad team — Detroit is that rare franchise that existed when the Super Bowl was created but never has been to it — Stafford was rescued by the Rams last year. In his first season as their QB, he's helped them to the big game, his connection with unanimous All-Pro receiver Cooper Kupp something very special. And seemingly unstoppable.

“Couldn’t be more grateful for Matthew Stafford,” coach Sean McVay said after Stafford went 31 of 45 for 337 yards with two TD passes in the 20-17 victory over San Francisco for the NFC title.

To say Stafford is a vast improvement over Jared Goff, the No. 1 overall choice in 2016, is too obvious. Stafford has a better arm, better technique, a better handle for pressure — statistically, he's the top NFL passer against blitzes — and, simply, better command of the most important position on the field. Yes, Goff got to the Super Bowl with the Rams in 2018, when they lost to New England with a wretched offensive performance. But Stafford in a lot of ways took the Rams to the big game rather than being along for the ride.

“You can’t write the story any better,” Stafford said. “I’m at a loss for words. I’m just having a blast playing ball with these guys and, shoot, we’ve got one more at the home stadium. Let’s get it done.”

The Rams (15-5) have blasted right into the Super Bowl in two weeks, when for the second straight year after it never occurred in the 54 previous editions, they will host it in their stadium. Tampa Bay turned that trick last season.

With the weapons on offense (Kupp and Odell Beckham Jr., most notably) and stars on defense such as unanimous All-Pro tackle Aaron Donald and linebacker Von Miller, a 2015 NFL champion with Denver, Stafford is in excellent position to turn his first season in L.A. into a Lombardi Trophy celebration.

Like Stafford, Burrow went to a struggling franchise. Oh, Cincinnati made the playoffs often enough in this century. It just bungled its way to seven consecutive postseason defeats under Marvin Lewis. When the Bengals went 2-14 in 2019 while Burrow was winning a national championship and setting records at LSU, it was an easy choice in the draft.

Still, his knee injury after 10 games (2-7-1 as a starter) seemed so appropriate for the Bengals. Another potentially good thing gone wrong.

Except so much has gone right in the last month, and here Burrow is, guiding the team to its first Super Bowl appearance in 33 years.

The injured good thing has turned into a healthy sure thing, with the brightest of futures.

"I wouldn’t call it surreal, I would say it’s exciting,” Burrow said. “I think if you would have told me before the season that we’d be going to the Super Bowl, I probably would have called you crazy. Then, you know, we play the whole season and nothing surprises me now.”

It's never surprising when a surpassing talent like a Burrow succeeds in the NFL. But it's also not shocking when one like Stafford languishes in a bad situation.

Take a look at QBs who were first overall selections and you get Peyton and Eli Manning, but you also get David Carr and JaMarcus Russell. For every John Elway, there is a Sam Bradford. Going further back, there's a Troy Aikman in 1989 and a Jeff George in 1990.

No matter what happens at SoFi Stadium on Feb. 13, consider this: Only once before have two overall No. 1 drafted QBs met in a Super Bowl, six years ago when Peyton and the Broncos beat Cam Newton and the Panthers. Either the long journey of Stafford or the quicker trip for Burrow will end with hoisting the Lombardi Trophy — exactly what top draftees are supposed to accomplish.