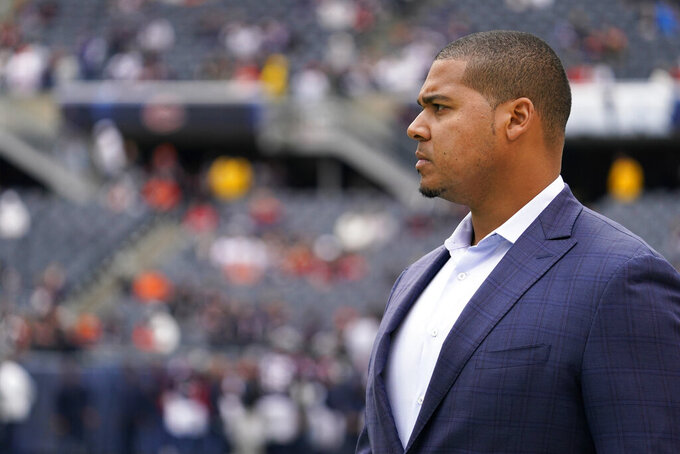 FILE - Chicago Bears general manager Ryan Poles watches players before the team's NFL football game against the Houston Texans, Sept. 25, 2022, in Chicago. Poles thought he inherited a potential cornerstone player for the defense in linebacker Roquan Smith when the Bears hired Poles in January. Smith was traded to the Baltimore Ravens on Monday, Oct. 31. Chicago pulled off another move prior to Tuesday's trade deadline, acquiring receiver Chase Claypool from the Pittsburgh Steelers for the Bears' second-round pick in 2023. (AP Photo/Nam Y. Huh, File)

LAKE FOREST, Ill. (AP) — Ryan Poles thought he inherited a potential cornerstone player for the defense in linebacker Roquan Smith when the Chicago Bears hired him as their general manager in January.

A contract standoff that heated up during training camp led to a trade demand and ultimately Smith getting sent to Baltimore — and the deal still stinging a day later.

“There's part of me that's bummed because this was a guy I thought was gonna be here a long time,” Poles said Tuesday. “I felt like we put a lot of effort forward to get that done, and we came up short and we couldn't find common ground.”

The Bears sent Smith to the Ravens for second- and fifth-round picks in the 2023 draft as well as linebacker linebacker A.J. Klein on Monday. It was their second major trade involving a defensive player in less than a week after dealing three-time Pro Bowl defensive end Robert Quinn to Philadelphia.

Chicago pulled off another move prior to Tuesday's trade deadline, acquiring receiver Chase Claypool from the Pittsburgh Steelers for the Bears' second-round pick in 2023. They gave quarterback Justin Fields a downfield threat who could help balance their offense. The Bears lead the NFL in rushing and rank last in passing.

The headliner the past two days was the Smith trade. And the events leading up to it were well-documented.

The Bears and Smith hoped to strike a new deal in the offseason with his rookie contract set to expire after this year. He participated in voluntary and mandatory offseason workouts. But once training camp start, things really became heated.

Smith, who does not have an agent, opted to “hold in." That allowed him to attend meetings and practices without participating in drills. He went public with a trade request and accused Poles of negotiating in bad faith by making take-it-or-leave-it offers.

Smith started practicing on Aug. 20, though he made it clear he wasn't happy about the situation. He did not play in any preseason games. But despite that, he is leading the NFL in tackles.

Maybe the outcome would have been different if Smith had an agent to handle negotiations and serve as a buffer between him and the organization. Poles acknowledged dealing directly with a player was awkward.

“It does make it (pause) just harder,” he said.

Poles said the Bears made their final offer to Smith before the season. They just weren't able to bridge the gap.

“We had a difference in value,” Poles said. “I’m not going to go into exactly where he slots and all of that. But at the same time, you want players to think highly of themselves. You want them to understand that they are the best at their position. I don’t fault him for that. But we had that conversation and obviously, it just didn’t work out.”

The Bears thought it was better to strike now rather than wait, with an underwhelming class of free agent receivers hitting the market after the season.

“You have to do a little bit of forecasting and looking down the road,” Poles said. “I just didn’t feel completely comfortable with that. Not to say that there’s not good players there.”

Fields is also starting to look more comfortable in the offense lately, with the Bears moving the pocket more and calling designed runs. He has a big target added to the mix in the 6-foot-4 Claypool.

Claypool has 32 receptions for 311 yards and one touchdown this season for the Steelers. He also threw the first touchdown pass of his career in last week’s loss to Philadelphia with a short flip to fullback Derek Watt on a gadget play.

But his production has slipped this year. He also became expendable, dropping to third on the depth chart with rookie George Pickens emerging as Pittsburgh's No. 2 receiver behind Diontae Johnson.

Claypool made a big impact for the Steelers after they drafted the Notre Dame product in the second round in 2020. He had nine touchdown catches and ran for two more scores as a rookie, helping Pittsburgh win the AFC North. But he has just three TDs since then.

“You can never have enough weapons and guys that help your quarterback gain confidence,” Poles said. “I know a lot of the guys are starting to make plays for us. Adding another receiver is going to allow (Fields) to continue to grow and gain that confidence.”