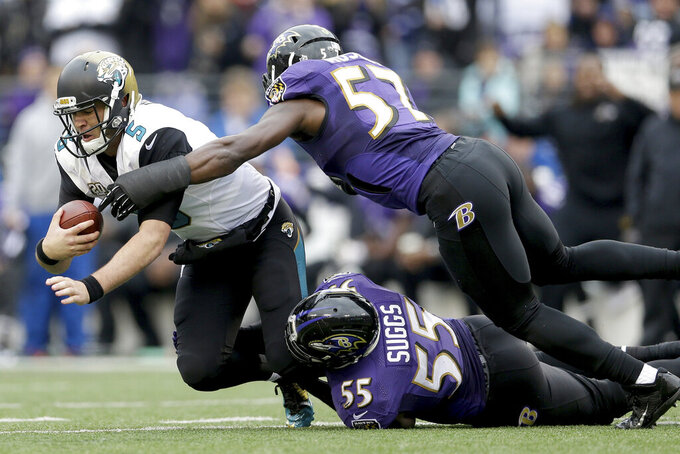 NEW YORK (AP) — Mike Maccagnan predicted the Jets — with lots of needs and plenty of money — would be very active when free agency kicked off.

The New York general manager has been wheeling and dealing since the NFL's legal tampering period began Monday, making several moves during a splashy spending spree that has the Jets plugging key roster holes.

Two people with direct knowledge of the deals say the Jets have agreed to sign wide receivers Jamison Crowder and Josh Bellamy.

They also agreed to sign Baltimore middle linebacker C.J. Mosley, a four-time Pro Bowl selection. The Jets also had an agreement with Minnesota linebacker Anthony Barr, but he instead opted to return to the Vikings on a five-year deal worth $67.5 million with $33 million guaranteed and more money available through escalators, according to a person with direct knowledge of the contract.

The team also will re-sign defensive end Henry Anderson and backup cornerback Darryl Roberts, according to the people who spoke to The Associated Press on Tuesday on condition of anonymity because teams can't announce deals until the NFL's new year begins Wednesday afternoon.

This all comes after Maccagnan and the Jets swung a deal with Oakland on Saturday to acquire left guard Kelechi Osemele, giving up a fifth-rounder while also getting the Raiders' sixth-round pick.

And New York likely is not done.

The Jets entered free agency with over $82.5 million in salary cap space, and still have the type of cash to remain in the hunt for running back Le'Veon Bell, who was considered a top target to add to new coach Adam Gase's offense.

For now, though, New York's defense has a big-time upgrade with the addition of Mosley, who'll pair with Avery Williamson to comprise a formidable duo.

The 26-year-old Mosley is headed out of Baltimore after the Ravens abandoned hope of matching an eye-popping offer made by the Jets, a reported five years and $85 million, including a whopping $51 million guaranteed.

The Ravens had hoped to keep Mosley, who led the team in tackles twice since being selected in the first round of the 2014 NFL draft. But first-year general manager Eric DeCosta couldn't come up with enough money to keep the five-year veteran.

Instead, Mosley will be in the middle of Gregg Williams' defense in New York.

"The Jets just made such a powerful offer that as an organization it just didn't make sense for us," DeCosta told the AP. "That's no reflection on how we feel about C.J. as a person and as a player in this community."

Mosley has had at least 100 tackles in every season but 2016, when he missed two games with an injury and finished with 92.

After it appeared Barr would come to the Jets, it was uncertain how Williams would use the four-time Pro Bowl selection and tackling machine. It also clouded the long-term future of 2016 first-rounder Darron Lee, who has been mostly disappointing because of inconsistency. He had a career-high three interceptions last season, but also was suspended for the final four games for violating the NFL's substance abuse policy.

Lee has one year left on his rookie deal, and it would appear unlikely the Jets will pick up his fifth-year option for 2020 — even without Barr coming to New York.

Crowder, whose deal is for three years and $28.5 million according to published reports, had 221 catches for 2,628 yards and 14 touchdowns in four seasons with Washington. He was limited to nine games last season because of an ankle injury, but the Jets envision his production to be more like the previous two seasons when he combined for 133 catches, 1,636 yards and 10 TDs.

Bellamy has 76 career catches for 999 yards and five touchdowns, and is also a special teams contributor. He spent the last five years with Chicago.

Anderson tied with linebacker Jordan Jenkins for the team lead with a career-high seven sacks last season. He was acquired from Indianapolis last April for a seventh-round draft pick and thrived in New York's defense.

When Indianapolis switched to a 4-3 base defense, it shopped Anderson — whose size and speed make him a better fit in a 3-4. He was dealt to New York and Todd Bowles' 3-4 base and had the best season of his career.

Williams has traditionally run a 4-3 defense, but Gase said last month that the defensive coordinator would be keeping the Jets' 3-4 base. That made keeping Anderson a priority for New York.

Roberts has been a key backup and spot starter the last three seasons, with two interceptions and 21 passes defensed with New York.