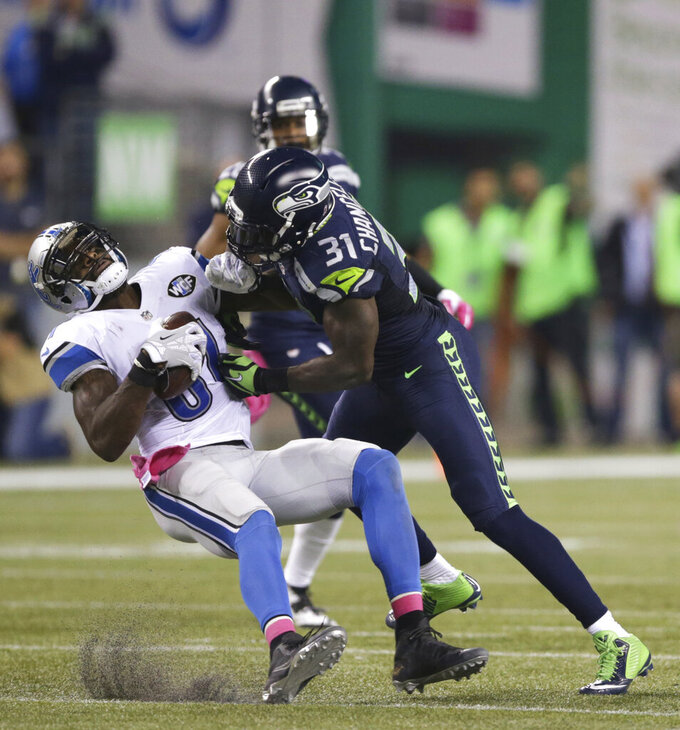 FILE - In this Oct. 5, 2015, file photo, Seattle Seahawks strong safety Kam Chancellor (31) hits Detroit Lions wide receiver Calvin Johnson (81) during the second half of an NFL football game in Seattle. The former Lions superstar said the team wanted him to change his story regarding one of the many concussions he had during his nine-year NFL career. (AP Photo/Scott Eklund, File)

DETROIT (AP) — Retired star receiver Calvin Johnson said the Detroit Lions wanted him to change his story regarding one of the many concussions he had during his nine-year NFL career.

Johnson told Sports Illustrated in a story published Friday he blacked out against Minnesota in 2012 and later told reporters he had a concussion from the game.

"I wasn't seeing straight," Johnson said in the interview. "And they wanted me to change my story."

Asked about Johnson's claims, the team issued a statement.

"We respect the privacy of individual players' medical situations and take great pride in the extensive work done by our medical staff and executive team to ensure we follow the appropriate protocols with respect to player health and safety," the Lions said. "The well-being of our players will continue to be an organizational priority."

Johnson also told SI he smoked marijuana after every game. His post-playing career includes being involved in the cannabis business, getting preliminary approval earlier this year for a medical marijuana dispensary in suburban Detroit.

The 33-year-old Johnson retired three years ago with 11,619 yards receiving and 83 touchdown receptions. The three-time All-Pro had 1,964 yards receiving in 2012, breaking Jerry Rice's single-season record set in 1995, and the mark still stands.

Johnson was potentially under contract through this season after signing an eight-year, $132 million deal. He had to pay the team back more than $1 million of his signing bonus after retiring. The Lions have attempted to welcome Johnson back to be a part of the organization in some capacity. Johnson told Sports Illustrated he "won't step foot in anything Lions-related" if the team doesn't give him the money back.