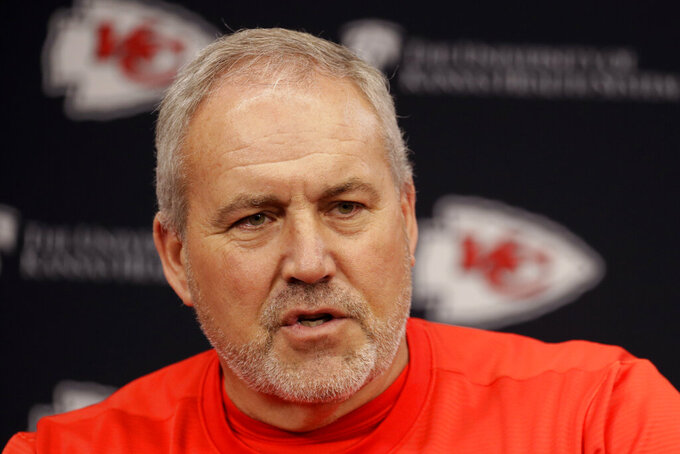 There’s the long snapper, tasked with delivering the ball. The kicker, who is expected to send it through the uprights. And the punter, who for many teams doubles as the holder on field goal and extra-point attempts.

The reason this is important, at least for the Super Bowl champion Kansas City Chiefs, is that for the first time in 15 years they are trying to decide on a new punter. Dustin Colquitt held down the job with Pro Bowl efficiency for as long as some of the current Chiefs have been playing football. But his increasing age and the franchise's dwindling coffers forced the club to make the difficult business decision to let him go this offseason.

With teams barred from holding in-person workouts because of COVID-19, the Chiefs have been unable to bring in an endless number of potential replacements. Instead, they signed Tyler Newsome and undrafted rookie Tommy Townsend, and those two have been working out privately with kicker Harrison Butker and long snapper James Winchester.

Well below the gathering limits of 10 people that have been in place in Kansas and Missouri.

“We're kind of fortunate," Chiefs special teams coach Dave Toub said, “because those guys can get together and kick and work on the operation. They can do that on our own. We can work on our skill set, whereas to play football you need 22 guys out there. You can't sit down face to face, but they video everything they do and send it to me and we talk.”

Nobody knows when teams will be allowed back at their facilities for good. Just this week, players rehabbing from injuries and certain staff were finally allowed back, but no coaches or healthy players. So that means what would typically be low-stress, good-natured workouts on a high school practice field for Newsome and Townsend have taken on extra importance.

What they show off on video could determine who has the leg up — pun intended — when training camp finally begins.

“There is nobody out in front right now. I like them both,” Toub said. “They've both got really strong legs, really powerful legs. They consistently hit over 5.0 (seconds) hang times, which is impressive. Tommy is a little more clean in his technique as far as consistency, whereas Tyler is a little more erratic. But the results are the same. They both bomb the ball.”

That's a good thing for the Chiefs as they attempt to replace a franchise icon.

Colquitt appeared in a record 238 games for Kansas City, easily besting the previous mark by Nick Lowery. He also set franchise records for punts, punt yardage and career-long kick with an 81-yard boot. When he was released, he was among the top 10 active players in appearances and had the eighth-most punt yardage in NFL history.

Even more impressive, he was the only man among the top 20 in total punts to have played with just one team.

“They've been with Dustin for a really long time. He's a guy that has done everything the right way,” Townsend said. “The biggest thing for me is just trying to make a name for myself and become my own person.”

Townsend's familiarity with Colquitt goes back to college; he began his career at Tennessee, where Colquitt holds a number of records, before transferring to Florida. As a Gator, he followed in the footsteps of his brother, Johnny, who was drafted by the Raiders a couple of years ago and has spent time in camp with the Giants.

Toub said the younger Townsend was the Chiefs' highest-rated punter in this year's draft class, even though two others — Texas A&M's Braden Mann and Syracuse's Sterling Hofrichter — where chosen in the later rounds.

Newsome punted at Notre Dame before spending last offseason with the Chargers.

“We just finished the virtual rookie minicamp and we went over schemes and stuff like that, so I got a little taste for what we're doing in Kansas City,” Townsend said, “and I've gotten a chance to watch all the film from the past few seasons. That's the stuff I've been working for, get the feeling for the schemes we are using here in Kansas City.”

That way, he'll be ready when the competition for the starting job finally returns to the Chiefs' own practice facility.

“Harrison and James have taken the leadership role. They know how important that part of it is,” Toub said. “They've been up here on their own, doing their own thing, and videoing it. And we feel good about both guys we have, Tommy and Tyler.”

By Teresa M. Walker 47 minutes ago
an hour ago
By Steve Megargee an hour ago
2 hrs ago
3 hrs ago