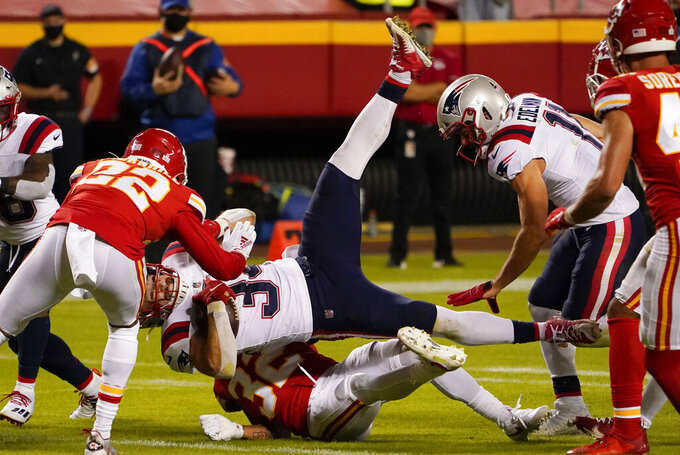 KANSAS CITY, Mo. (AP) — After he was asked the standard questions about the brilliance of Patrick Mahomes and the scourge of COVID-19, Raiders coach Jon Gruden finally lit up when someone questioned him about the vast improvement of the Kansas City defense.

He proceeded to list off all the pertinent stats: The Chiefs are second in scoring defense, fifth in total defense. “They take the ball away. They blitz you. They come from everywhere,” he said. “They've been real stingy with everything I've seen.”

Here is the most important number, though: The Chiefs are 4-0 for the fourth consecutive year, and thanks largely to that suddenly dominant defense, they have a chance to take a stranglehold five games into the season on the AFC West when they face Las Vegas on Sunday at Arrowhead Stadium for the first of their two regular-season meetings.

“I give (Steve) Spagnuolo, the defensive coordinator, a ton of credit. You have no idea what he's going to come up with next,” Gruden said. “It's a great scheme. It's very diverse. Tyrann Mathieu is one of the guys that really makes it go.”

The star safety has plenty of help. Defensive tackle Chris Jones was tied for the AFC lead in sacks before missing last week's game with a groin injury; he is expected back this weekend. Frank Clark is a proven pass rusher, Juan Thornhill has become a premier safety. And cornerback Bashaud Breeland will return from a four-game suspension Sunday.

Put those pieces together and you have the only NFL defense that, despite so often being overlooked by Mahomes and their high-octane offense, has yet to allow more than 20 points in a game this season.

“Competing against our offense all training camp, a lot of these guys have been getting work against the best offensive players in the league,” Mathieu said. “I just want those guys to stay motivated and continue to get better and stay hungry.”

If nothing else, Las Vegas (2-2) should provided a balanced test this week. Derek Carr directs the 13th-rated pass attack and running back Josh Jacobs leads a rush offense that is tied for 15th in the league.

They scored 34 points in each of their first two games before dropping games against the Patriots and Bills.

“It's kind of fun, the competition part of it,” Chiefs coach Andy Reid said. “I think they're playing really good football right now and very strong. They're going to bring it for four quarters and that's how they roll.”

Raiders-Chiefs has long been one of the NFL's bitter rivalries. The teams have met 122 times since their days together in the AFL, and the animosity has been there regardless whether the Raiders played in Oakland, Los Angeles or now Las Vegas.

“I think it's the Raiders against the Chiefs,” Reid said, “and it wouldn't matter where they were housed at. It would still be the Raiders and the Chiefs. That's how I look at it.”

The Chiefs had their game against the Patriots pushed to Monday when Cam Newton tested positive, and two more New England players have since been placed on the COVID-19 list. One of them is defensive back Stephon Gilmore, who had a face-to-face exchange with Mahomes after the game that has led to some concern in Kansas City.

“The NFL talked to our team. The are in constant communication,” Mahomes said. “(Chiefs trainer) Rick Burkholder reminded the guys after the game. I think as long as we listen to those protocols we can keep from having any outbreaks.”

One thing missing from the Chiefs offense this season has been game-breaking plays, but it's not for lack of trying. Defenses are simply refusing to let Tyreek Hill, Sammy Watkins and Co. beat them deep downfield, forcing Mahomes to throw passes to underneath receivers and outlets rather than pushing the ball downfield.

“We're still fast, we can still catch, we still have all that,” Hill said. “Sometimes teams just play not to give up the deep shot.”

Arrowhead Stadium hasn’t been kind to Carr over the years. He has lost all six starts there in his career, becoming one of only eight QBs since the merger to lose that many road games in a single stadium without a win.

“It will never be easy,” said Carr, who has nine turnovers in those games, leading to a miserable 63.2 quarterback rating. “We haven’t won there in some time as an organization. We need to get a win there.”

The Raiders have struggled to stop anyone this season, allowing three of four opponents to score at least 30 points. It’s been a recurring problem since coordinator Paul Guenther arrived in 2018. The Raiders rank 31st in points allowed and yards-per-play and last in sacks and takeaways. The pass rush is tied for 29th in sacks (four) and pressures (26).