Chiefs see areas in need of improvement in win over Patriots 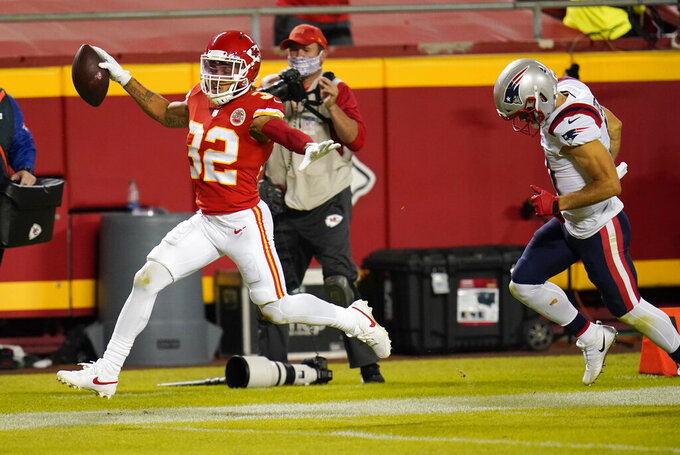 KANSAS CITY, Mo. (AP) — Andy Reid stepped to the podium and tried to put a positive spin on the game, then quarterback Patrick Mahomes and safety Tyrann Mathieu took their turns behind the microphone with morose looks upon their faces.

Not beaten the New England Patriots by more than two touchdowns.

Such is the high standard they have set for themselves. Even on a night in which they shut down the Patriots offense — albeit missing quarterback Cam Newton, running back Sony Michel and half their offensive line — and had built a cushion by the final minutes, the Chiefs were still far from content with their 26-10 victory on Monday night.

“Early in the game we were moving the ball the way we wanted to move it. We were doing stuff the right way and we couldn’t figure out ways to get in the end zone, and then they obviously got some stops there in the middle,” Mahomes said, "but I’m proud of how the guys fought at the end of the game. That game easily could’ve went the other direction. They had a lot of the momentum, the defense made some stops and we were able to score whenever it counted.”

Indeed, the Chiefs managed just six points in the first half. Tyreek Hill and Travis Kelce were blanketed by a talented New England secondary. Kansas City lost the time-of-possession game, had four penalties at inopportune times, fumbled the ball away in the red zone and still led just 13-10 early in the fourth quarter.

But the Chiefs are nothing if not resilient. This is largely the same team, after all, that rallied from double-digit deficits in each of its three playoff games last season to win its first Lombardi Trophy in 50 years.

Mahomes immediately answered the Patriots' only touchdown of the game by engineering a nine-play, 75-yard drive that resulted in Mecole Hardman's touchdown catch. And when Mathieu was perfectly positioned to intercept a tipped pass and return it for a touchdown, the Chiefs were on their way to becoming the first team to start 4-0 in four straight years.

“I like the fight in the guys. They don't get down,” Reid said. “Every play is not going to be a great play, but they don't flinch on it. They learn from it and then they bring it the next time. That becomes an important ingredient throughout a season.”

The Chiefs' secondary held fill-in quarterbacks Brian Hoyer and Jarrett Stidham to 20 of 37 for 190 yards with a touchdown and three interceptions. The Chiefs did it without cornerback Bashaud Breeland, who wrapped up his four-game suspension, and L'Jarius Sneed, their talented rookie who broke his collarbone the previous week in Baltimore.

The Chiefs finally got their ground game going in the fourth quarter, but Clyde Edwards-Helaire and Darrel Williams were stuffed most of the night. They wound up running 25 times for just 94 yards as a team.

Mathieu has been the steadying presence in the defensive backfield all season, but he really shined Monday night. He had an interception in the end zone taken away by a questionable pass interference call, then finally got a pick later in the game, when he returned it for the clinching touchdown.

“It's cool any time you can score points defensively, especially for myself. I don't always get in the stat sheet,” said Mathieu, who hadn't scored since 2015 with Arizona. “Just do my best to be in the right place and do my job.”

Harrison Butker has struggled after kicking the winning 58-yard field goal in overtime against the Chargers. He missed his only field-goal try against Baltimore and missed a PAT for the second straight game against New England.

Defensive tackle Chris Jones tried to warm up Monday night, but was inactive because of a groin injury. He was later joined on the sideline by defensive end Mike Danna, who hurt his hamstring during the game.

13 — That's the number of games the Chiefs have won since losing at Tennessee in Week 10 of last season. It's the longest overall win streak in franchise history, and the 10 straight regular-season wins are the second most.

The Patriots game, which was delayed one day by positive COVID-19 tests, was the start of three games during an 11-day stretch. The Chiefs welcome the Raiders on Sunday before heading to Buffalo the following Thursday night.