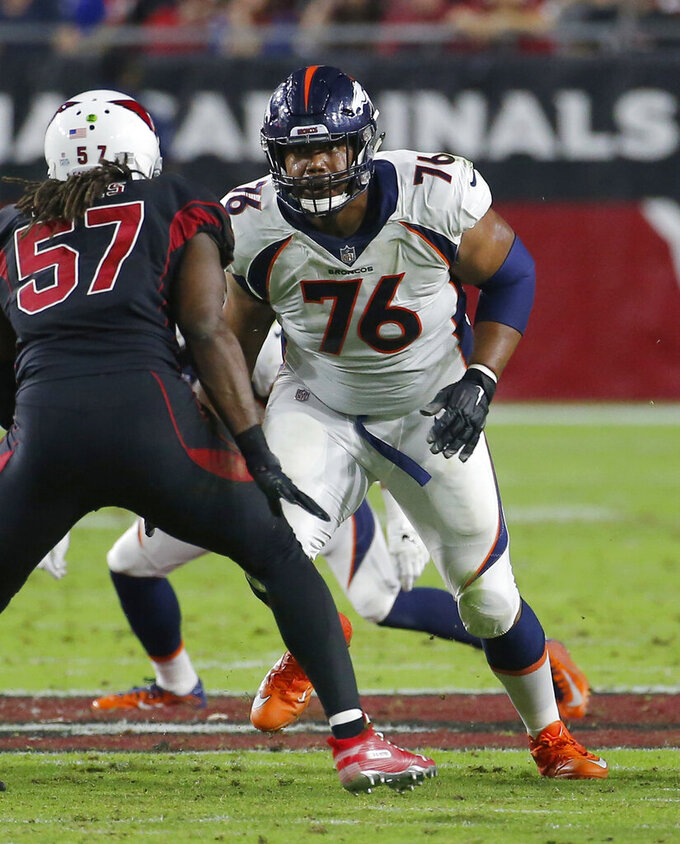 FILE - In this Oct. 18, 2018, file photo, Denver Broncos offensive guard Max Garcia works against the Arizona Cardinals during an NFL football game in Glendale, Ariz. Garcia and New Orleans Saints receiver Austin Carr are the Super Bowl Gospel Choir’s two active players. Garcia says he found out about the choir from a teammate and was put in touch with Johnson. (AP Photo/Rick Scuteri, File

ATLANTA (AP) — Retired Dallas Cowboys safety Dextor Clinkscale gets a chance each year to re-experience the camaraderie of playing in the NFL when the Super Bowl Gospel Choir convenes to perform in the city hosting the league's marquee game.

The choir provides about 60 players — mostly retired and a couple of current ones — a different type of team atmosphere, one that combines a love of gospel music and pro football.

During rehearsal at the annual reunion , this time for Thursday night's performance in the 20th Super Bowl Gospel Celebration at Atlanta Symphony Hall, Clinkscale said he felt his spirit being rekindled in the same way it does each year.

"It is part of the electricity and ... the power of it," Clinkscale said Wednesday evening. "It moves through everything, and I think that's a big reason why so many of the guys come. You see some guys that you didn't even realize were on a roster, but the spirit of the Lord brings us together, and it just happens."

Carr grew up singing in the church and got the itch to perform after visiting Broadway in high school. He started acting, playing piano and taking vocal training. He performed with the Super Bowl choir last year, but is not this year.

He said he joined the choir because "I love to sing. I love God. It was just this opportunity to get involved."

The NFL-sanctioned choir will perform two songs at the sold-out event that's being televised on BET Saturday. The event also will feature performances by Kirk Franklin, Koryn Hawthorne, Tasha Cobbs Leonard and The Winans.

For Orlick Johnson, a former linebacker who played parts of two seasons and ended his career in 2000, the choir is a means for players to minister to each other.

"And can you make a lot of money and destroy your life? Yes, you can, but we want to that guiding light for each other and we always can learn something from each other."

"Just to have played in the NFL," Butler said is all the qualification a player needs "and I do the rest."

The group will perform "I'll Make It," with songwriter Hezekiah Walker, and "Jesus Can Work It Out," written by Dr. Charles Hayes and the Cosmopolitan Church of Prayer.

The Broncos' Garcia, who is performing this year, found out about the choir from a teammate and was put in touch with Johnson.

It was an easy decision for the 6-foot-4, 309-pound guard, who writes poetry, sings his own songs and performs karaoke nearly every Monday night in Denver. He has deep Christian faith and a love for the arts.

"You get to express yourself," Garcia said. "I like to dance, sing, I like to draw. Any way I express what I'm feeling inside I think it's necessary. I think it's healthy, especially what's going on with our mental health issue in America. I think it's important for someone to find an outlet they enjoy doing. Singing is definitely one of mine."

Johnson will never forgot how veteran players helped him adjust to the NFL by keeping their faith first.

"Either the first or second year, I was part of an organization called CAUSE — Christian athletes used for spiritual empowerment," the former linebacker said. "That was started with Reggie White and Cris Carter and Randall Cunningham. Those guys, my rookie year, they just took me in as a Christian. They showed me the ropes and let me know I wasn't alone."

As Johnson headed back to rehearsal, he had some new friends to meet.

By Josh Dubow 49 minutes ago
By Teresa M. Walker an hour ago
By Tom Withers 4 hrs ago
By Dave Skretta 5 hrs ago
By Steve Reed 7 hrs ago