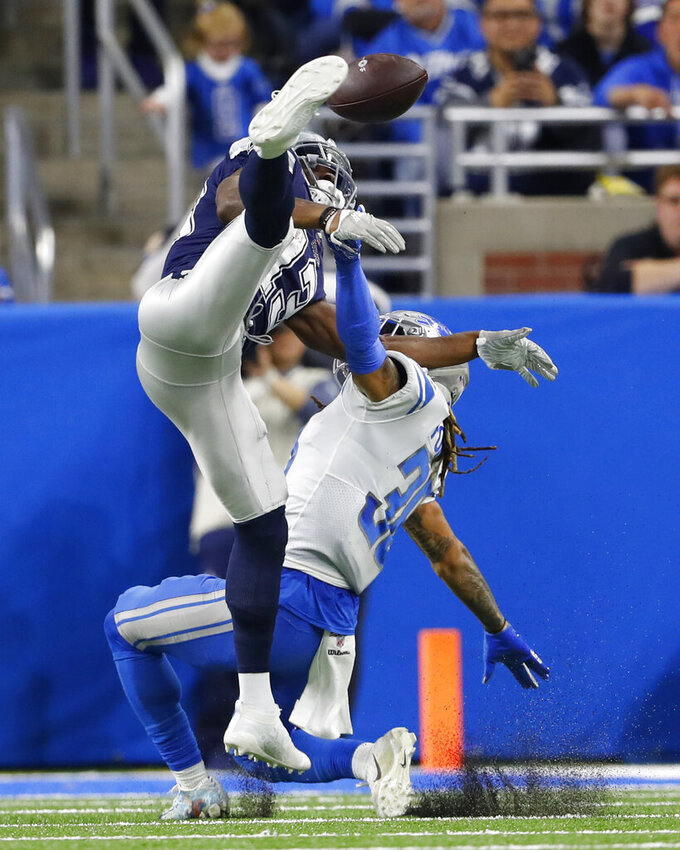 DETROIT (AP) — Dak Prescott and the assortment of playmakers surrounding him are getting praise for giving the Dallas Cowboys the NFL’s top-ranked offense.

Give the big guys up front their due, too.

Prescott took advantage of a comfortable pocket as he threw for 444 yards and three touchdowns, lifting the Cowboys to a 35-27 win over the Detroit Lions on Sunday.

“Our offensive line did a great job, giving me some time,” Prescott said. “I had some time to go through the progressions once and a couple times, go through them again to find the open guy.”

The Cowboys (6-4) have won three of four games at least in part because Prescott has been tough to stop, with 10 TD passes and three interceptions during the successful stretch.

Dallas has had balance with the ball, but Prescott was passing with such ease that it wasn’t necessary to try to move the ball much on the ground in the Motor City.

The Lions (3-6-1) were without Matthew Stafford for a second straight game and have lost six of seven.

“This is tough,” Lions guard Graham Glasgow said. “This is something we take very seriously and we know we have to get better. We've got talent, but we aren't finding ways to maximize our talent.”

Stafford’s backup, Jeff Driskel, played well enough to give his team a shot to compete. He threw a 25-yard yard TD pass to Marvin Jones with 5:49 left to pull Detroit within eight points before a 2-point conversion failed.

The Lions forced Dallas to punt, but they opted to punt while facing a fourth-and-26 from midfield.

From the Cowboys 13 on second down on the ensuing drive, Prescott sealed the victory with a 23-yard pass to Blake Jarwin.

The two-time Pro Bowler completed 29 of 46 passes. He threw a 21-yard TD pass to Tony Pollard early in the second quarter and a 19-yard pass to Randall Cobb with 27 seconds left in the quarter, giving him a career-high 274 yards passing in a first half.

Prescott threw a pass slightly wide to Ezekiel Elliott midway through the fourth quarter and the running back made the catch, kept his balance and scored from 17 yards out.

Michael Gallup had nine catches for 148 yards, and Cobb made four receptions for 115 yards to help the team compile 509 yards of offense.

“They have a bunch of guys who can make plays and it is tough to account for all of them,” Detroit cornerback Darius Slay said. “There were plays where I thought we had them shut down, but someone would get open by a step and Dak would hit the throw or he'd get out of the pocket and run.”

Driskel was 15 of 26 for 209 with two TDs passing and a rushing score on one of his eight carries for 51 yards.

“This is another game where I feel the offense played well enough for us to win,” Lions linebacker Devon Kennard said.

Detroit running back Bo Scarbrough ran for a 5-yard TD early in the game after Elliott fumbled.

Scarbrough insisted it didn’t give him added satisfaction to score against the team that drafted the former Alabama player last year and released him.

“Look at the score — we lost,” he said. “That touchdown doesn’t really mean anything.”

Scarbrough, promoted to the active roster from Detroit’s practice squad on Saturday, started the game and finished with 14 carries for 55 yards.

Dallas gave up the first score for the seventh time in 10 games.

The Cowboys almost felt at home in Detroit, where thousands of their fans filled Ford Field with chants for them.

“That was pretty weird for a road game,” Dallas defensive end Robert Quinn acknowledged. “There were a couple times where we were down or getting tired and we really got a boost from all of our fans out there.”

The Cowboys had a pair of running backs — Elliott and Pollard — catch TD passes for the first time in a game since 2001.

Cowboys: RT La’el Collins left the game with a knee injury in the fourth quarter.

Cowboys: At New England next Sunday.

Lions: At Washington next Sunday.