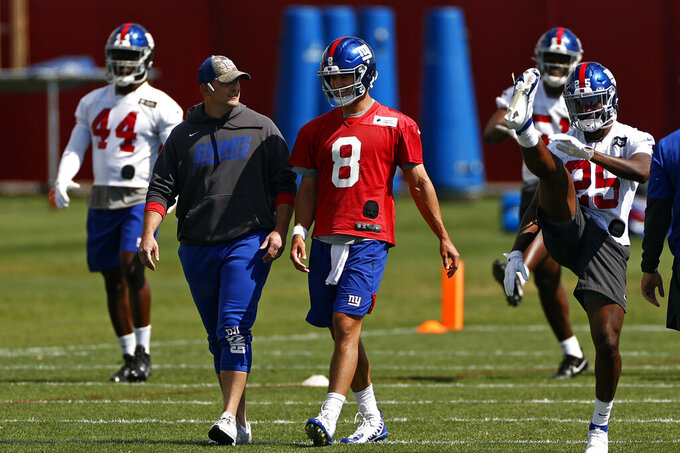 New York Giants running back Saquon Barkley isn't going to work out with teammates on the field until his rehabilitation from a major knee injury is complete.

Barkley, who was hurt in the second game last season, was not on the field Tuesday as the Giants opened a three-day mandatory minicamp at their headquarters near MetLife Stadium.

“In terms of where he’s at right now, he comes in every day, he attacks every day from a rehab standpoint,” Judge said. “He’s had a phenomenal attitude and great motivation, he’s been tremendously positive. We are going to make sure that we take Saquon’s rehab at the correct rate for his individual body and injury."

Barkley tore the anterior cruciate ligament in his right knee while being tackled against the Bears on Sept. 20. He had surgery on Oct. 30.

“It’s not any mirror of anybody else’s injury out there,” Judge said. “We have to make sure that we let him get it at his pace and put him on the field, can play 100 percent aggressive and confident, and he’s going to play safe and he can play effective.”

Barkley typically does his on-field rehabilitation in the mornings before practice, Judge said. The 24-year-old goes indoors when his teammates are on the field.

Judge is happy the way the rehab has been going and he said Barkley is eager to get back on the field. The No. 2 overall draft pick in 2018, he was the NFC Offensive Rookie of the Year and rushed for at least 1,000 yards in each of his first two seasons.

“I know Saquon’s working hard and doing everything he can to make progress every day,” quarterback Daniel Jones said. “That’s the type of person he is and the type of worker he is. Certainly, we’ve got his back and supporting him, and I know he’s working his tail off, everything he can do and doing what the trainers are asking him to do. He’s had that mindset since he went down.”

During a voluntary workout recently, the Giants only had a couple of defensive backs on the field.

The rest were borrowing a page from the quarterback playbook and worked out together with safety Logan Ryan in Tampa, Florida. NFL quarterbacks often invite their receivers to a location for private workouts to get used to each other.

“I really just wanted to bring the guys down and just have some time to ourselves,” Ryan said Tuesday after practice. "It was tough last year, joining the team so late and not really having an opportunity to bond with the guys.

“So I just think those guys got to see how I work day-to-day, and we got to talk a lot about how we would play things and we actually had a boating trip,” Ryan added. “I think (James) Bradberry said he didn’t catch any fish, OK, but we talked a lot about coverage and Bradberry talking about how he was covering a guy, and really it was cool sharing stories how we covered guys in the league.”

Ryan is getting a chance to play with cornerback Adoree Jackson, a former teammate with the Tennessee Titans.

Receiver Kenny Golladay, who signed a four-year, $72 million contract with the Giants as a free agent, said this season starts a new chapter in his life.

“I definitely feel like I have to go out there and prove to other people, including myself, it’s different for me,” the former Lion said. “I got drafted to Detroit. Played all four years there. This is a whole different environment right now. So I’m just ready to accept the challenge and just ready to go to work. ”

NOTES: The Giants announced the game times for their three preseason games. The Aug. 14 contest against the Jets will be played at 7:30 p.m. They will play the Browns in Cleveland on Aug. 22 at 1 p.m. and finish on Aug. 29 with a 6 p.m. game against the New England Patriots.