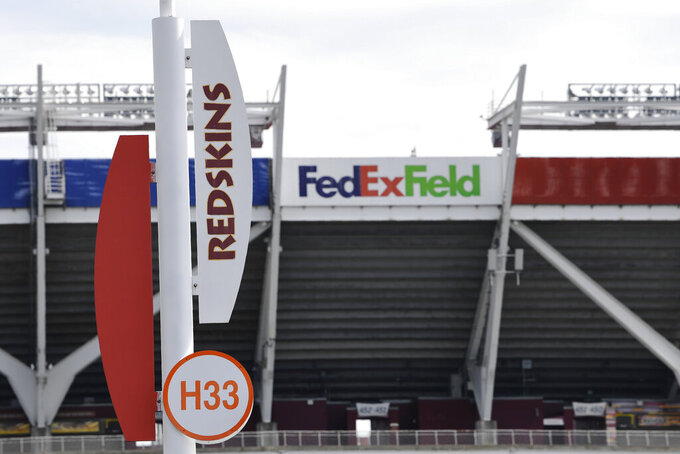 Signs for the Washington Redskins are displayed outside FedEx Field in Landover, Md., Monday, July 13, 2020. The Washington NFL franchise announced Monday that it will drop the "Redskins" name and Indian head logo immediately, bowing to decades of criticism that they are offensive to Native Americans. (AP Photo/Susan Walsh)

Longtime Washington broadcaster Larry Michael announced Wednesday he's leaving the team after 16 years, the latest in a series of changes within the organization.

Michael released a statement saying he's “retiring” from his position. In addition to being the “Voice of the Washington Redskins" on radio and hosting the TV show “Redskins Nation," Michael served as a senior vice president and the team’s chief content officer.

He was a close ally of owner Dan Snyder and former president Bruce Allen, who was fired after last season.

"After 16 great years my time with the organization is over," Michael said. "As a lifelong Washingtonian, I was blessed to work with a lot of great people. I want to thank everyone who contributed over the years. I’m especially grateful to Dan Snyder for giving me the opportunity. On to the next chapter.”

Michael's exit is another significant move since coach Ron Rivera took over control of football operations on New Year’s Day. Director of pro personnel Alex Santos and assistant Richard Mann II are also no longer with the organization, a move that came to light in recent days.

The team is in the midst of wholesale changes, including the announcement Monday that it's dumping the name Redskins after 87 years. Allen's firing and Rivera's hiring also brought a new medical and training staff and a different set of assistant coaches.

“Upon my arrival to Washington in January, Jeff Scott was one of the members of the previous staff that I immediately pinpointed as someone that fits the culture I am creating here,” Rivera said. “I look forward to continuing to work with Jeff along with Kyle Smith and the rest of the personnel department as we head into the 2020 season.”

NOTES: WR Kelvin Harmon is expected to miss the 2020 season after tearing the ACL in his right knee. ... G Brandon Scherff will play on the $14.8 million franchise tag after he and the team failed to agree on a long-term contract.