Matt LaFleur says 4-1 Packers are 'playing for each other' 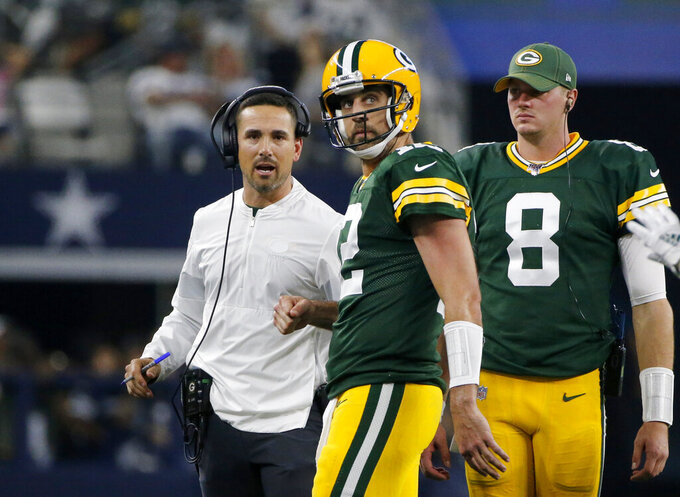 Green Bay Packers coach Matt LaFleur, left, talks with Aaron Rodgers (12) and Tim Boyle (8) on the sideline during the first half of the team's NFL football game against the Dallas Cowboys in Arlington, Texas, Sunday, Oct. 6, 2019. (AP Photo/Michael Ainsworth)

GREEN BAY, Wis. (AP) — There are six rookie NFL head coaches this season, and Green Bay's Matt LaFleur is standing head and shoulders above them all.

LaFleur and the Packers improved to 4-1 with a 34-24 win over the Cowboys on Sunday.

While Lafleur is a yard shy of being undefeated, the other five rookie coaches are a combined 4-18-1. The 39-year-old LaFleur shared the secret to his early success on Monday.

"Just thinking about the teams that, whether it's when I was in high school, college or in the NFL, generally speaking, I think the teams that were the closest, that were the most connected, that played for each other, had the most success. And I don't think that's by chance," LaFleur said. "Obviously, you gotta have really good players, and we're fortunate that we have a bunch of really good players. But I think the more that they continue to play for each other, I think that that's going to lead to greater results and greater success."

The Aarons. Aaron Rodgers, with his biggest receiving threat in Davante Adams out because of a toe injury, threw for 238 yards to nine targets and had no interceptions en route to earning his seventh career win against the Cowboys. Rodgers now has won four straight at AT&T Stadium. He is 3-0 against the Cowboys in that stadium and also led the Packers to a win in Super Bowl XLV in Jerry Jones' house.

"Yeah, I've had some fun around here," Rodgers said. "Four fun ones."

Aaron Jones waved "bye-bye" to Dallas cornerback Byron Jones on the way to one of his four rushing touchdowns. Jones, who played high school and college ball in El Paso, Texas, became the first player ever to run for four touchdowns against the Cowboys. Jones finished with 182 scrimmage yards (107 rushing and 75 receiving) in a dominant effort as the focal point of a Packers offense that was missing fellow running back Jamaal Williams.

"Two weeks in a row now we haven't been able to punch it in from the 1-yard line, so there's obviously room for improvement there," LaFleur said.

Green Bay had first-and-goal at the 1. Jones was stopped for a 1-yard loss on first down, Rodgers threw back-to-back incompletions and Green Bay settled for a field goal.

In Week 4, Rodgers and the Packers turned over the ball on downs on the goal line in the fourth quarter of a loss to the Eagles after four straight passes.

Green Bay's inefficiency didn't hurt it this week. But if the Packers can't figure out how to finish from tight in, it will no doubt cost them again down the road.

Jaire Alexander has had a tremendous season thus far. He has gotten high praise from both LaFleur and Rodgers. But the second-year cornerback had his struggles Sunday against Cowboys receiver Amari Cooper. In total, not just in Alexander's coverage, Cooper finished the game with 11 catches for a career-high 226 yards. He had a 53-yard touchdown against Alexander.

"You know what? Sometimes that happens in this league, especially when you're going up against one of the best receivers in this league," LaFleur said. "That's why you have to have a short memory as a defensive back. I love everything about Jaire. I think he competes on each and every play."

Alexander had an interception and a team-high three defended passes in the game, but Cooper was the clear winner in the battle between a very good young cornerback and one of the best route runners in the league.

Center Corey Linsley suffered a concussion, while rookie safety Darnell Savage left with an ankle injury. Neither player returned. Will Redmond replaced Savage, while Lucas Patrick took over for Linsley.

"Lucas did a good job," Packers offensive line coach Adam Stenavich. "I was proud of the way he went in and competed. He plays with great effort. He kept our offense rolling when Corey went down. That's always the biggest thing when you bring a center in is his communication, his targeting. He has to get everything on point. I was fired up for how he did that. Had a few deals that we gotta clean up, but I was proud of him."

Tight end Robert Tonyan suffered a hip injury and inside linebacker B.J. Goodson left with a neck injury. Oren Burks, who missed the first four games with a pectoral injury, made his season debut in place of Goodson.

Za'Darius Smith went down three different times with a knee issue, while cornerback Kevin King left with a knee injury and didn't return.

The Packers will host NFC North foe Detroit on Monday night. It will be Green Bay's third prime-time game of the season. The Packers split the previous two.