NFL 2019: Eyes on Jones in what could be Eli's final year 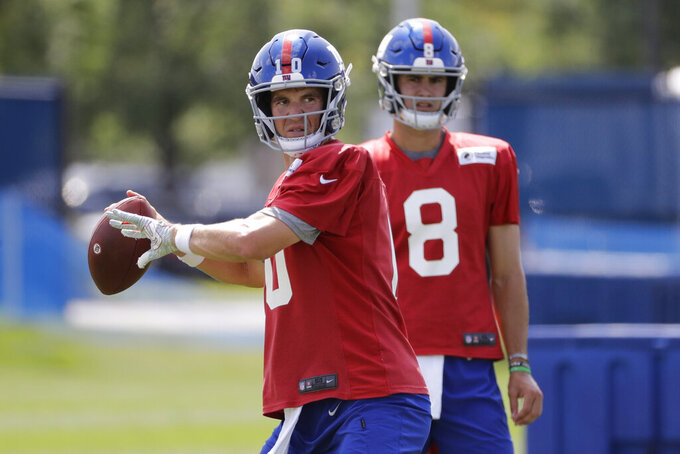 EAST RUTHERFORD, N.J. (AP) — Eli Manning is entering a team-record 16th season with the New York Giants and his career in some ways might be coming full cycle.

The 38-year-old, two-time Super Bowl MVP is entering the final year of his contract and there is a similarity to his rookie season in 2004.

The Giants had acquired Manning, the No. 1 overall pick by San Diego, on draft day. The question confronting new coach Tom Coughlin was when to play the kid from Ole Miss and sit Kurt Warner, who had just signed with the team.

Nine games was the answer.

Fast forward and second-year coach Pat Shurmur is facing almost the same situation, except Manning is on the bubble and everyone is waiting to see when Daniel Jones, the No. 6 pick overall, takes over.

Shurmur and co-owner John Mara have said the perfect ending would be Manning having a great season and leading the Giants (5-11) to the playoffs for the first time since 2016, and the second time since winning the Super Bowl in February 2012.

Manning isn't feeling any pressure with an heir apparent in place.

"In this job, the pressure is to go out there and perform at a high level to win football games," he said. "That's the point. You can't worry about what other guys are doing behind you and what's going on there. My mindset is to prepare each and every week to get better, to make the guys around me better, to try to make good decisions, play at a high level, and put the team in a situation to win."

Mara sees the comparison to '04, a year the Giants went 5-4 under Warner and 1-6 under Manning.

"We weren't quite sure when that was all going to take place and how it would all kind of work out, but yeah, there's a certain similarity to it," he said. "I like to think that we have a better team than we had in 2004, but we'll see about that."

Warner left the Giants after the season and led the Arizona Cardinals to a Super Bowl appearance in the 2008 season.

The Manning era started for good in 2005 and the Giants won the NFC East that season, then Super Bowls in the 2007 and '11 seasons.

It should be of prime interest to see what Jones does, and when.

With the season opener set for Sept. 8 in Dallas, here are some things to watch:

BARKLEY ALL THE TIME

Saquon Barkley set team rookie records for yards rushing (1,307), receptions (91), and total touchdowns (15) playing behind a bad line. With trade acquisition Kevin Zeitler at right guard, free agent Mike Remmers at right tackle, and center Jon Halapio back from a major leg injury, this could be an even bigger year for the NFL Offensive Rookie of the Year and the league leader in yards from scrimmage (2,028).

NO BECKHAM, NO TATE

After trading Odell Beckham Jr. to Cleveland in the offseason, general manager Dave Gettleman signed veteran Golden Tate III for $37.5 million. Good move — except Tate will miss the start of the season. He will be serving a four-game suspension for violating the policy on performance enhancers. Veterans Bennie Fowler III, Cody Latimer, Russell Shepard and TJ Jones will have to step up to support Sterling Shepard and tight end Evan Engram.

THE PASS RUSH, OR LACK THEREOF

Coordinator James Bettcher and his 3-4 scheme start second season; last year was a learning experience. New York was 24th in total yards allowed, 20th against the run and 23rd against the pass. Only two other teams were worse in sacks per pass attempt. Leading sacker Olivier Vernon was traded to Cleveland. Rookie tackle Dexter Lawrence should help against the run. Still hard to say where the pass rush comes from: linebackers Lorenzo Carter and Markus Golden are the best guess.

Daniel Jones isn't the only rookie who might play. Not by a long shot. Lawrence and cornerback DeAndre Baker — fellow first-rounders — probably are starters. Defensive backs Julian Love and Corey Ballentine — taken in the fourth and sixth rounds, respectively — and linebacker Ryan Connolly, a fifth-round choice, all are going to get time in sub packages. Wide receiver Darius Slayton, also a fifth-rounder, was slowed by a hamstring injury, but can make plays and go deep.

After a disappointing first season, placekicker Aldrick Rosas was outstanding, making 32 of 33 field goal attempts and 31 of 32 PATs for 127 points. It's going to be hard to match. The major question is the return men. Corey Coleman tore an ALC on the first day of camp and no one has stepped up on kickoff runbacks. Same with punt returns, although starting safety Jabrill Peppers is good. Latimer, Ballentine, and TJ Jones are leading candidates for jobs.