NFL parlays with Caesars as sponsor minus sports betting 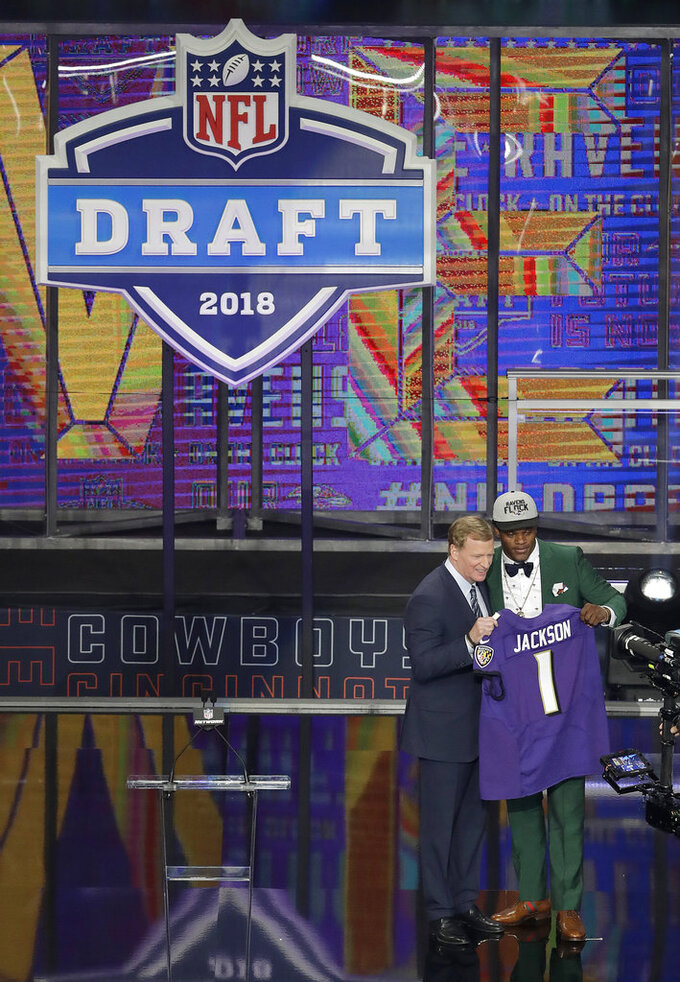 FILE - In this April 26, 2018, file photo, Commissioner Roger Goodell presents Louisville's Lamar Jackson with his Baltimore Ravens team jersey during the first round of the NFL football draft, in Arlington, Texas. The NFL is partnering with Caesars Entertainment as its first official casino sponsor, but the deal does not include sports betting or fantasy football. The multiyear arrangement announced Thursday, Jan. 3, 2019, begins with this weekend's playoffs. Caesars will have exclusive rights to NFL trademarks in the U.S. and United Kingdom, including the Super Bowl and draft. Caesars will host parts of the 2020 draft. (AP Photo/Eric Gay, File)

The NFL entered a partnership with Caesars Entertainment on Thursday, the league's first official casino sponsor. The multiyear deal, however, does not include sports betting or fantasy football.

The arrangement begins with this weekend's playoffs and is worth $30 million annually for three years, a person with knowledge of the agreement tells The Associated Press. The person spoke on condition of anonymity because the league has not announced specific terms.

This latest development is part of a dizzying turnabout for the league. For years, the league insisted gambling was one of the biggest threats to its existence.

Caesars will draw on its properties, celebrity chefs, music artists and other entertainment platforms to provide NFL fans with "unique experiences."

Caesars will have exclusive rights to NFL trademarks in the U.S. and United Kingdom, including the Super Bowl and draft. Caesars will host parts of the 2020 draft.

The Cowboys, Ravens, Saints, Falcons, Eagles, Bears, Raiders, Jets, Lions and Seahawks already have advertising agreements with casinos. Caesars Entertainment is heavily into sports books operations and has locations in New Jersey and Mississippi, along with Nevada. It has planned one in Pennsylvania.

With the expansion of sports betting to other states made possible by last year's Supreme Court ruling, other gambling companies have reached partnerships with leagues. Last year, MGM Resorts became the official gambling partner of the NBA, the NHL and Major League Baseball.

Attempts by Las Vegas to advertise on the Super Bowl were rebuffed repeatedly in the past because the city has casino gambling and sports betting. Three years ago, the NFL canceled a fantasy sports convention that then-Cowboys quarterback Tony Romo was helping organize because it was going to be held in a convention area adjacent to a Las Vegas casino.

Things began changing in 2017 when the NHL put a team in Las Vegas, the first major sports franchise for the city. They changed even more when the city lured the Raiders beginning in 2020 with a $1.9 billion stadium built across the freeway from the Mandalay Bay hotel-casino. NFL Commissioner Roger Goodell attended the groundbreaking for the new stadium and later awarded Las Vegas the 2020 NFL draft.