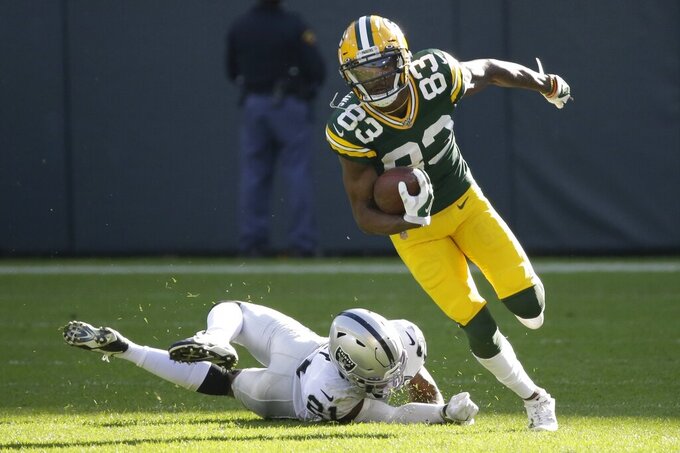 ALAMEDA, Calif. (AP) — The Oakland Raiders traded 2017 first-round cornerback Gareon Conley to the Houston Texans on Monday for a 2020 third-round pick, marking the third former first-round pick traded away by coach Jon Gruden in the past 14 months.

The Raiders made the deal a day after allowing Aaron Rodgers to throw for 429 yards and five touchdowns in a 42-24 victory for Green Bay and six days before Oakland (3-3) takes on the Texans (4-3).

"I think he's good player. I'm not going to get into it other than that," Gruden said. "I think he's a good young player. We drafted two young corners to play also and they're back ready to go here quickly. We want to give them an opportunity, like we are a lot of young players at other positions."

With Conley gone, the Raiders will give second-round pick Trayvon Mullen an opportunity and they also want to give fourth-round pick Isaiah Johnson a look when he comes off injured reserve early next month.

Conley is just the latest former high draft pick made by former general manager Reggie McKenzie who is no longer with the team. The Raiders sent 2014 first-rounder Khalil Mack to Chicago for a package that included two first-round picks and 2015 first-rounder Amari Cooper to Dallas for a 2019 first-round pick last season.

"Say whatever you want. We didn't want to trade Mack, I said that a hundred times," Gruden said. "Circumstances sometimes are what they are. We're building our team. We'll see where we are. Everybody has their own opinion. We feel we're doing what's best for our team. Period."

Only eight players remain on the 53-man roster who were not acquired by Gruden since he arrived in January 2018. Gruden has overseen a roster overhaul and is looking to add even more new players with two first-round picks and three third-rounders in the 2020 draft.

Conley was drafted 24th overall out of Ohio State in 2017 but played only two games as a rookie. He played 21 of 22 games the past two seasons under Gruden but never developed into a consistent pass defender.

Mullen was exposed in the season opener against Denver when he was forced into action when Conley left with a neck injury. He allowed three catches and one touchdown on four targets.

Mullen has played just 14 defensive snaps the past three games.

"He's still raw," Gruden said. "He still has some green to him. He's a great kid, great competitor. He has size, a change of direction and he's tough. He has pride, has a big upside."

The Texans needed help at cornerback with starters Johnathan Joseph and Bradley Roby both missing time with injuries. Roby did not play in Sunday's loss to Indianapolis and Joseph left the game with an injury after sitting out two weeks ago.

Houston allowed Jacoby Brissett to throw for 326 yards and four touchdowns in a 30-23 loss.

This marks the second straight season that the Texans traded for a player the same week they faced that team. Last year, Houston acquired receiver Demaryius Thomas from Denver the same week the Broncos played the Texans. Thomas had three catches for 61 yards in a 19-17 win for Houston.

This story has been corrected to show the compensation for Gareon Conley is a third-round pick.