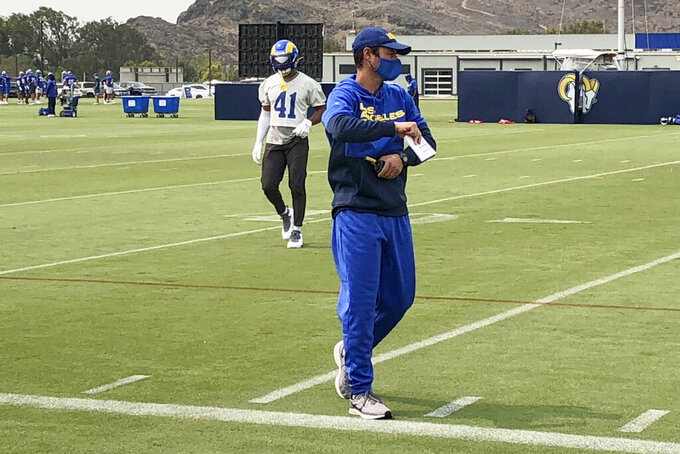 On Sunday night, Staley will be the defensive coordinator of the Los Angeles Rams in the first game ever played at $5 billion SoFi Stadium.

The journey from 5,416-seat Don Shula Stadium on the campus of a small Jesuit school in the Cleveland suburbs to the most expensive football arena ever built is an awfully long trip.

To make it in the space of just three football seasons is nothing short of remarkable, but the Rams believe they've got an extraordinary coach leading Aaron Donald, Jalen Ramsey and the LA defense when they host the Dallas Cowboys in their season opener.

Although Staley can get loud with his players on the practice field, he isn't betraying any extremes of emotion as he prepares for his debut.

Vic Fangio picked Staley to be his outside linebackers coach with the Chicago Bears in February 2017, and Fangio took Staley with him to Denver a year later. Sean McVay, himself the youngest head coach in modern NFL history when he was hired in 2017, then made his surprising move for Staley last winter.

McVay saw more than a bit of himself in Staley. They're both football obsessives who had modest playing careers — Staley was a two-year starting quarterback at the University of Dayton, while McVay was a receiver at Miami of Ohio — but also possess boundless energy and an active mind combined with a strong knack for clear communication.

“I think we both love football,” McVay said. “We’re both whacked out in that area, where we don’t have much balance. We love our families, and then we love football. It was just a really seamless conversation where you felt like you’ve known somebody for a long time, even though it was the first time we were spending an extended amount of time together.”

McVay had already taken a risk when he dismissed veteran defensive coordinator Wade Phillips, whose unit was mostly solid last season after holding New England to 13 points in the Super Bowl. Los Angeles was ninth in defensive efficiency in 2019, but the defense collapsed in season-defining losses to Tampa Bay, Baltimore and Dallas.

McVay then took an even bigger risk by putting a first-time coordinator in charge of several veteran assistants retained from Phillips' staff.

But McVay thinks he found a coach worth the risks.

His first interview with Staley turned into a fascinating, lengthy conversation. Staley had prepared for it by researching McVay's football history, and they found plenty to discuss. Staley soon revealed himself as an adept, enthusiastic teacher at heart, just like McVay.

“I’m a son of a teacher and a coach,” Staley said. “My wife is an educator, and I think your teaching progression really matters. How you present things to your players is really important. I think it starts with your language ... and grouping things into concepts so your players aren’t just memorizing things.”

McVay was fascinated by the success of Fangio's defenses in Chicago and Denver, and he wanted to adapt many of those principles to the Rams' personnel and basic 3-4 ideology. Staley's NFL experience is short, but it has been rich: He coached the likes of Khalil Mack and Von Miller during his three years under Fangio.

Donald and Ramsey both appear to be getting along well with Staley, as do the other prominent Rams veterans.

“He comes with a lot of juice every morning,” defensive tackle Michael Brockers said. “He actually makes you feel like you want to play. The first time we were on the Zoom call, he had me fired up, ready to go. I wanted to put my helmet on, on the Zoom call, because he had me so fired up.”

The Rams' defense had ample reason to take a step back this season. LA lost leading tackler Cory Littleton, productive pass rushers Dante Fowler and Clay Matthews, and veteran safety Eric Weddle in the offseason. Among their few signees was Leonard Floyd, a pass-rushing linebacker coached by Staley in Chicago.

Staley clearly isn't intimidated by the challenges of the transformation he's attempting to pull off in his four-year move from Division III to the NFL.

“It’s day after day, moment after moment, taking advantage of every opportunity you get to create buy-in from your players, especially when you’re brand-new,” Staley said. “When you're brand-new, you've got to prove yourself, you know? And that’s something that makes the NFL special. No matter what role you’re in, you've got to prove yourself every day in the NFL. It’s a special responsibility. It’s one that I don’t take lightly, and I enjoy that part of it.”