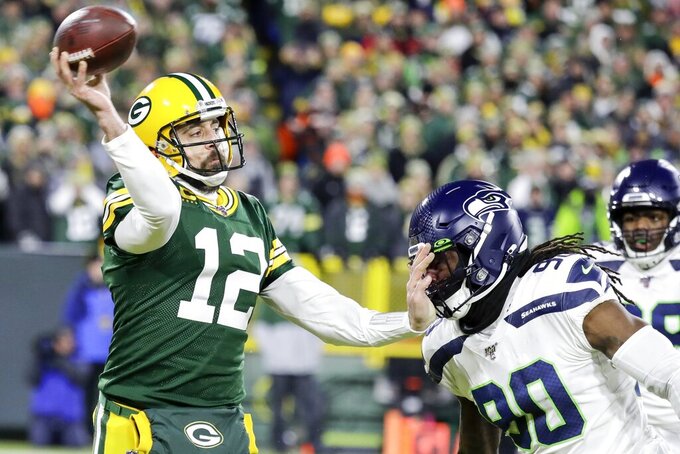 RENTON, Wash. (AP) — When the Seattle Seahawks head into free agency, it’s clear where their focus will need to be.

The line of scrimmage must be a priority for general manager John Schneider and coach Pete Carroll with several significant players that are pending free agents for the Seahawks.

Seattle has 19 total unrestricted free agents going into the offseason and is expected to have close to $70 million in salary cap space heading into free agency. It’s a massive spending sum for the Seahawks compared to previous years and could end up being eaten up by several of their own free agents.

The free agent class is highlighted by a pair of defensive linemen in Jadeveon Clowney and Jarran Reed.

Clowney may not have posted eye-popping numbers but his acquisition from Houston right before the start of the regular season was viewed as a success in the Seattle locker room. Clowney had a handful of games when he was the best defensive player on the field for Seattle, and played half the season with a core muscle injury that will require surgery in the coming days.

Clowney said after the loss to Green Bay on Sunday his priority is to play for a team with a chance to win a Super Bowl. Whether that team is Seattle will be determined by whether Clowney wants to test free agency. He won over Seattle’s locker room, but where his price tag ends up will ultimately determine if the Seahawks even become a suitor.

His style doesn’t fit the profile of a traditional edge rusher and his sack numbers reflect that. But whether a team sees his value as an all-around disrupter may ultimately determine how much he earns. DeMarcus Lawrence was the highest-paid defensive end — by yearly average — at $21 million this season.

“I just want to win. I’m trying to get to a Super Bowl, by any means,” Clowney told reporters after Sunday's loss to Green Bay. “That’s what I’m looking for. Who gonna get me there? I ain’t looking to get on no sorry team for no money. That ain’t gonna fly.”

In theory, Clowney fits with Seattle no matter what. But Carroll hinted to some potential schematic changes to Seattle’s defense going into next season, which could change some of Seattle’s needs.

Run stoppers will always be needed and why Reed likely is near the top of Seattle’s priority list. Reed had 10 ½ sacks last year, but this season was limited to two sacks after being suspended the first six games of the season.

Reed said he had no feel if he’d be back but wants to return to the only team he’s played for.

“Of course. I’ve been here four years. This is home. Everything will take care of itself,” he said.

Other key defensive free agents for Seattle are tackle Al Woods and end Quinton Jefferson. Ziggy Ansah is not likely to return and linebacker Mychal Kendricks is recovering from a torn ACL suffered in Week 17.

Offensively, the attention will be on the line where Seattle will need to make a decision about its right tackle. Germain Ifedi has been rocky in his four seasons, but has shown improvement and will be a free agent. George Fant, who filled in at left tackle this season, could be an option at right tackle if Ifedi leaves. But Fant is also a free agent, believes he can be a left tackle, and could depart if someone offers him a chance to start at his preferred position.

Left guard Mike Iupati will also be a free agent, but Jamarco Jones filled in and played well when Iupati was injured.

And lastly, there’s the uncertainty whether Marshawn Lynch’s unretirement was just three games and four touchdown runs, or if the 34-year-old version of Lynch wants to play in the 2020 season.