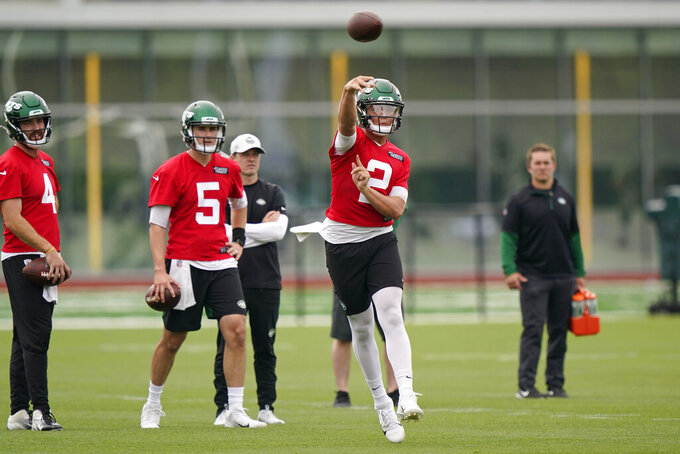 FLORHAM PARK, N.J. (AP) — Zach Wilson was walking off the field after his final practice of New York Jets minicamp when fellow rookie Michael Carter shared an observation that resonated with him.

“It’s hard to know sometimes,” the running back said to Wilson, “if it was a good or a bad day.”

That's life in the NFL when you're just starting out, when the positives and negatives swirl in your mind — and you can only hope to use both to get better. And when all eyes are on you for every snap, step and throw as the newly anointed franchise quarterback, as Wilson is, those thoughts are only magnified.

But Wilson, the No. 2 overall pick in the draft just seven weeks ago, answered with the maturity and clarity of a seasoned vet when asked how he thought he performed this spring.

“It’s hard to say exactly how you did,” Wilson said. “Personally, in my eyes, I feel I can improve every single day. I feel like I’m learning something every single day. Even on the good days, it’s still frustrating and it’s just because it’s like a foreign language. Every single day it’s the same plays, but you’re getting different reps, different looks at it, different defensive coverages, whatever it is.”

And that's precisely to be expected from a young QB getting a crash course in being a pro.

“It’s been a learning curve for him,” offensive coordinator Mike LaFleur said. “We’ve thrown a lot at him.”

That's in large part because they know they can.

LaFleur ramped up the installation schedule the past two weeks and incorporated more situational football. Wilson wouldn't have a script of plays from which to operate at times — “call-it periods," as LaFleur put it — and would have to listen to the call from the offensive coordinator through his helmet speaker and be sure he had the right play and the offense lined up correctly.

“When you’re basically in your third week of just calling plays within this offense and an 11-on-11 situation, I thought he did a really good job with that,” LaFleur said. “He put so much time into it.”

Wilson has quickly earned a reputation for having an insatiable hunger for watching film. He simply can't get enough, whether it's breaking down his own play or picking up things about the offense in general.

From his perspective, he has made the most improvement the last few weeks in his timing — knowing how quickly a play can appear and break down, and what he can do with his footwork to be a split-second ahead of the defense.

“I look back in college, you’re running the same offense for three years, so you know it like the back of your hand,” Wilson said. “Out here, you’re always just a step slow at first. It’s just how fast can I get through my progressions to where I don’t even have to think about it? If something’s covered, I instantly know how to move on. I think that’s the key and that’s what I’ve gotten better with."

The natural ability that made the Jets fall in love with him was on display numerous times during the last few weeks — the arm strength, the sharp spiral, the off-balance throws, the accuracy and making plays out of nothing at all.

Wilson has also impressed with his penchant for bouncing back from on-field hiccups.

“He’s a fast study,” passing game specialist Greg Knapp said. “He has done a good job of minimizing mistakes. You’ve got to expect mistakes from anyone starting the first time in any profession. I’ve seen very minimal same mistakes twice.”

Although the team is now officially off until late-July when training camp begins, Wilson plans to gather as many of the Jets' playmakers as he can over the next few weeks to continue working on their rapport on and off the field.

He'll also be scouring as much film as he can so he can ace the next step of his NFL education.

“I don’t love feeling unprepared,” Wilson said. “I don’t love feeling like I’m not ready for something. I love the always having something new feeling every day in practice. You don’t know what defense they’re going to throw at you and there’s always something new to prepare for and get better at. I’m just going to make sure I’m doing everything I can to be ready once training camp comes around.”