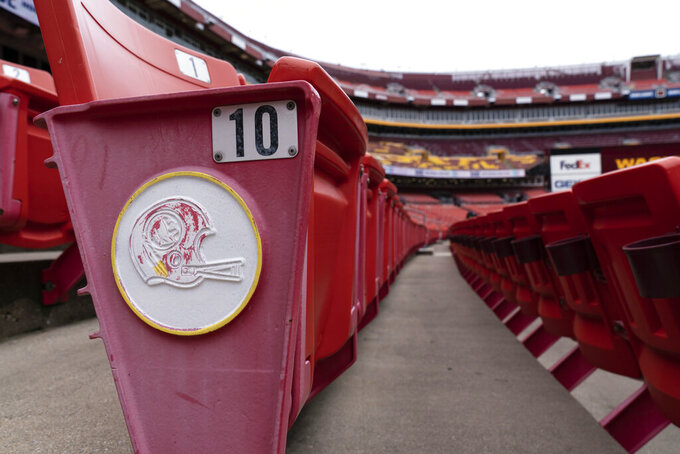 The former logo for the Washington football team is seen on the sides of the seats before an NFL football practice at FedEx Field, Monday, Aug. 31, 2020, in Washington. (AP Photo/Alex Brandon)

ASHBURN, Va. (AP) — The road to the Washington Football training facility known as Redskins Park will no longer be called Redskin Park Drive.

The team announced Tuesday it's renaming the road to its Ashburn, Virgnia, practice facility Coach Gibbs Drive in honor of the Hall of Fame, three-time Super Bowl-winning coach Joe Gibbs. And a main street leading to the entrance of FedEx Field in Landover, Maryland, will be called Sean Taylor Road in memory of the late Washington safety whose career was cut short when he was murdered at age 24 in 2007.

“As we look forward and build a modern identity that everyone can be proud of, it’s imperative that we revere tremendous individuals who have had a positive influence on the franchise and our fan base," owner Dan Snyder said. "There are no two people more deserving than Sean Taylor and Joe Gibbs.”

The street sign changes are part of an organizational rebranding that began in July with dropping the Redskins name. Washington Football Team is the official name for at least the 2020 season.

“The renaming of these streets along with all of the changes being made to our stadium are just part of our long-term goal of improving every element of the Washington Football Team, both off and on the field," Snyder said.

The streets will be changed before the start of the NFL season.

Washington's practice facility will now have a permanent address of 21300 Coach Gibbs Drive. Gibbs, who had two stints coaching Washington, called it “an amazing honor” to have his name on the mailing address.

“My time with the team was marked by the strength and courage of our players and assistant coaches, both of whom deserve so much of the credit for the franchise winning three Super Bowl titles," Gibbs said in a statement.

"Each of those winning seasons started with the preparation and dedication of practices and workouts at our training facility in the offseason.”

5 hrs ago
7 hrs ago
9 hrs ago
By The Associated Press 9 hrs ago
By Brandon C. Williams 8 hrs ago